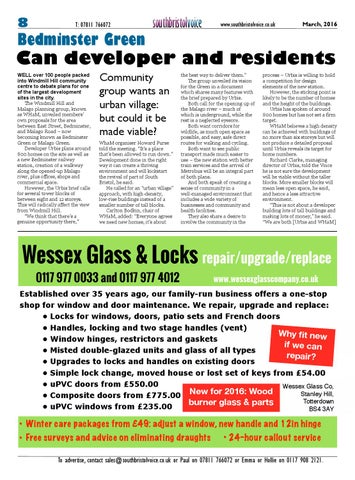 Can developer and residents   WELL over 100 people packed into Windmill Hill community centre to debate plans for one of the largest development sites in the city. The Windmill Hill and Malago planning group, known as WHaM, unveiled members’ own proposals for the area between East Street, Bedminster, and Malago Road – now becoming known as Bedminster Green or Malago Green. Developer Urbis plans around 800 homes on the site as well as a new Bedminster railway station, creation of a walkway along the opened-up Malago river, plus offices, shops and commercial space. However, the Urbis brief calls for several tower blocks of between eight and 12 storeys. This will radically affect the view from Windmill Hill. “We think that there’s a genuine opportunity there,”

Community group wants an urban village: but could it be made viable?

WhaM organiser Howard Purse told the meeting. “It’s a place that’s been allowed to run down.” Development done in the right way it can create a thriving environment and will kickstart the revival of part of South Bristol, he said. He called for an “urban village” approach, with high-density, low-rise buildings instead of a smaller number of tall blocks. Carlton Bodkin, chair of WHaM, added: “Everyone agrees we need new homes, it’s about

the best way to deliver them.” The group unveiled its vision for the Green in a document which shares many features with the brief prepared by Urbis. Both call for the opening up of the Malago river – much of which is underground, while the rest is a neglected eyesore. Both want corridors for wildlife, as much open space as possible, and easy, safe direct routes for walking and cycling. Both want to see public transport made much easier to use – the new station with better train services and the arrival of Metrobus will be an integral part of both plans. And both speak of creating a sense of community in a well-managed environment that includes a wide variety of businesses and community and health facilities. They also share a desire to involve the community in the

process – Urbis is willing to hold a competition for design elements of the new station. However, the sticking point is likely to be the number of homes and the height of the buildings. Urbis has spoken of around 800 homes but has not set a firm target. WHaM believes a high density can be achieved with buildings of no more than six storeys but will not produce a detailed proposal until Urbis reveals its target for home numbers. Richard Clarke, managing director of Urbis, told the Voice he is not sure the development will be viable without the taller blocks. More smaller blocks will mean less open space, he said, and hence a less attractive environment. “This is not about a developer building lots of tall buildings and making lots of money,” he said. “We are both [Urbis and WHaM]

• Winter care packages from £49: adjust a window, new handle and 12in hinge • Free surveys and advice on eliminating draughts