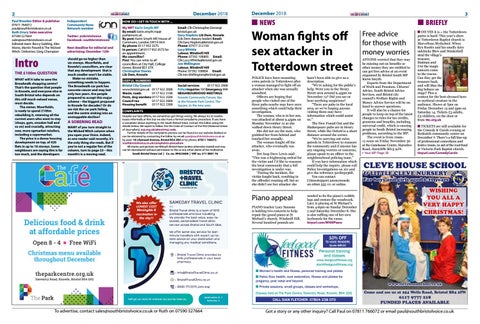 should go no higher than six storeys. Moorfields, and Knowle’s councillors, are clear that any development that is much smaller won’t be viable. Make no mistake, something needs to happen. The Broadwalk car park has concrete cancer and may last only two years. Are people prepared to accept this major scheme – the biggest proposed in Knowle for decades? Or do we risk the car park failing, and the centre sinking into an unstoppable decline?

THE £100m QUESTION WHAT will it take to save the Broadwalk shopping centre? That’s the question that poeple in Knowle, and everyone else in South Bristol who depends on this still much-valued venue, must decide. The owner, Moorfields, is ready to spend £100m rebuilding it, retaining all the current users who want to stay (shops, gym, snooker hall and so on) and crucially, attracting new, more upmarket retailers, including a supermarket. The price is a dense housing development on top, of 420 flats in up to 10 storeys. Some neighbours are saying this is far too much, and the developers

A SOBERING READ MANY of you turn straight to the Wicked Witch column when you open your Voice. Indeed, as one reader said recently, it’s the only thing she reads. But if you’re not a regular fan of the column, turn to page 23 – this month’s is a moving read.

COMPLAINTS Despite our best efforts, we sometimes get things wrong. We always try to resolve issues informally at first but we also have a formal complaints procedure. If you have a complaint about anything in the South Bristol Voice, contact the Editor using the details below. We aspire to follow the the Code of Conduct of the NUJ (National Union of Journalists), nuj.org.uk/about/nuj-code. Further details of the complaints process can be found on our website (below) or can be obtained by contacting the Editor by email: paul@southbristolvoice.co.uk or by post: 18 Lilymead Avenue, Bristol BS4 2BX or by phone: 07811 766072. southbristolvoice.co.uk/complaints-procedure All stories and pictures are ©South Bristol Voice (unless otherwise stated) and may not be reproduced without permission in this or any other plane of the multiverse. South Bristol Voice Ltd | Co. no. 09522608 | VAT no. 211 0801 76

Woman fights off sex attacker in Totterdown street POLICE have been mounting extra patrols in Totterdown after a woman managed to fight off an attacker when she was sexually assaulted. Officers are hoping that people who visited one of the three pubs nearby may have seen something which could help their investigation. The woman, who is in her 20s, was attacked at about 9.45pm on Monday November 12 as she walked down Henry Street. She did not see the man, who grabbed her from behind and touched her sexually. The woman fought off the attacker, who eventually ran away. Det Insp Dave Lewis said: “This was a frightening ordeal for the victim and I’d like to reassure the local community that a full investigation is under way. “During the incident, the victim fought back, resulting in the offender running off, but as she didn’t see her attacker she

hasn’t been able to give us a description. “We’re asking for the public’s help. Were you in the Henry Street area around 9.45pm on November 12? Did you see or hear anything suspicious? “There are pubs in the local area, so we’re hoping anyone visiting them may have information which could assist us.” The New Found Out and the Shakespeare pubs are in Henry Street, while the Oxford is a short distance around the corner. “We’re carrying out extra patrols in Totterdown to reassure the community and if anyone has any ongoing worries or concerns, please speak to an officer in the neighbourhood policing team.” If you have information which could help the inquiry, please call Police Investigations on 101 and give the reference 5218252368. You can contact Crimestoppers anonymously on 0800 555 111 or online.

needed to fix the piano’s wobbly legs and restore the woodwork. Lucy is playing at St Michael’s from 4-6pm on Sunday December 2 and Saturday December 8. She is also raffling one of her own keyboards for the cause. tinyurl.com/WHillPiano

Meningitis B vaccination in the city!!

We offer same-day service for lastminute travellers with expert up-todate advice on your destination and managing any medical conditions.

For boys and girls aged 2-11 years

WISHING YOU ALL A VERY HAPPY CHRISTMAS!

n TICKETS are still available for the Comedy & Carols evening at Redcatch community centre on December 7. There’s a full line-up of professional comedians and festive treats, in aid of the roof fund at Victoria Park Baptist church. tinyurl.com/ComedyCarols

ANYONE worried that they may be missing out on benefits or other money they are entitled to can get free advice at an event organised by Bristol South MP Karin Smyth. Experts from the Department of Work and Pensions, Citizens’ Advice, South Bristol Advice Services, and Bristol city council’s Welfare Rights and Money Advice Service will be on hand to answer questions. It will also be a chance for people to keep on top of the latest changes to rules for tax credits, pensions and benefits, including universal credit, which is causing people in South Bristol increasing problems, according to the MP. The event is from 10am12 noon on Friday November 30 at the Gatehouse Centre, Hareclive Road, Hartcliffe BS13 9JN. • Your MP: Page 38

n OH YES it is – the Totterdown panto is back! This year’s show at Totterdown Baptist church is Marvellous Mythchief. When Rex Roofer and his smelly fairy sidekicks Blew and Stinkerbell steal the village’s treasure, Statman and Uni the magic unicorn come to the rescue. Can they get the treasure back, and will Max the dog behave on stage? Plus a contest for the best-dressed hero or mythical creature in the audience. Shows at 7pm on Friday December 13 and 3pm on Saturday 14. Tickets £5 adults, £3 children, on the door or from tbc.org.uk

Free advice for those with money worries