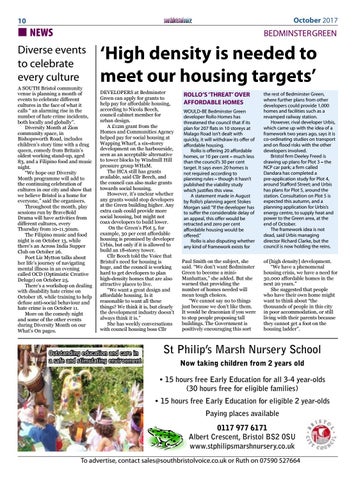 n NEWS Diverse events to celebrate every culture A SOUTH Bristol community venue is planning a month of events to celebrate different cultures in the face of what it calls “ an alarming rise in the number of hate crime incidents, both locally and globally”. Diversity Month at Zion community space, in Bishopsworth Road, includes children’s story time with a drag queen, comedy from Britain’s oldest working stand-up, aged 83, and a Filipino food and music night. “We hope our Diversity Month programme will add to the continuing celebration of cultures in our city and show that we believe Bristol is a home for everyone,” said the organisers. Throughout the month, play sessions run by BraveBold Drama will have activities from different cultures, every Thursday from 10-11.30am. The Filipino music and food night is on October 13, while there’s an Across India Supper Club on October 26. Poet Liz Mytton talks about her life’s journey of navigating mental illness in an evening called OCD (Optimistic Creative Deluge) on October 25. There’s a workshop on dealing with disability hate crime on October 18, while training to help defuse anti-social behaviour and hate crime is on October 11. More on the comedy night and some of the other events during Diversity Month on our What’s On pages.

‘High density is needed to meet our housing targets’ DEVELOPERS at Bedminster Green can apply for grants to help pay for affordable housing, according to Nicola Beech, council cabinet member for urban design. A £12m grant from the Homes and Communities Agency helped pay for social housing at Wapping Wharf, a six-storey development on the harbourside, seen as an acceptable alternative to tower blocks by Windmill Hill pressure group WHaM. The HCA still has grants available, said Cllr Beech, and the council can also make grants towards social housing. However, it’s unclear whether any grants would stop developers at the Green building higher. Any extra cash could provide more social housing, but might not coax developers to build lower. On the Green’s Plot 5, for example, 30 per cent affordable housing is promised by developer Urbis, but only if it is allowed to build an 18-storey tower. Cllr Beech told the Voice that Bristol’s need for housing is huge, and the council is working hard to get developers to plan high-density homes that are also attractive places to live. “We want a great design and affordable housing. Is it reasonable to want all these things? We think it is, but clearly the development industry doesn’t always think it is.” She has weekly conversations with council housing boss Cllr

Outstanding education and care in a safe and stimulating environment

ROLLO’S ‘THREAT’ OVER AFFORDABLE HOMES WOULD-BE Bedminster Green developer Rollo Homes has threatened the council that if its plan for 207 flats in 10 storeys at Malago Road isn’t dealt with quickly, it will withdraw its offer of affordable housing. Rollo is offering 20 affordable homes, or 10 per cent – much less than the council’s 30 per cent target. It says even 20 homes is not required according to planning rules – though it hasn’t published the viability study which justifies this view. A statement made in August by Rollo’s planning agent Stokes Morgan said: “If the developer has to suffer the considerable delay of an appeal, this offer would be retracted and zero per cent affordable housing would be offered.” Rollo is also disputing whether any kind of framework exists for

the rest of Bedminster Green, where further plans from other developers could provide 1,000 homes and facilities such as a revamped railway station. However, rival developer Urbis, which came up with the idea of a framework two years ago, says it is co-ordinating studies on transport and on flood risks with the other developers involved. Bristol firm Deeley Freed is drawing up plans for Plot 3 – the NCP car park; a firm called Dandara has completed a pre-application study for Plot 4, around Stafford Street; and Urbis has plans for Plot 5, around the station. Consultation on Plot 5 is expected this autumn, and a planning application for Urbis’s energy centre, to supply heat and power to the Green area, at the end of October. The framework idea is not dead, said Urbis managing director Richard Clarke, but the council is now holding the reins.

Paul Smith on the subject, she said. “We don’t want Bedminster Green to become a miniManhattan,” she added. But she warned that providing the number of homes needed will mean tough choices. “We cannot say no to things just because we don’t like them. It would be draconian if you were to stop people proposing tall buildings. The Government is positively encouraging this sort

of [high density] development. “We have a phenomenal housing crisis, we have a need for 30,000 affordable homes in the next 20 years.” She suggested that people who have their own home might want to think about “the thousands of people in this city in poor accommodation, or still living with their parents because they cannot get a foot on the housing ladder”.