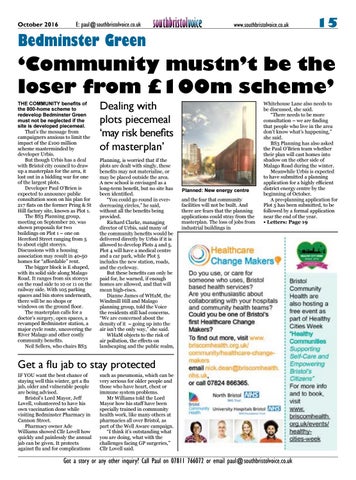 ‘Community mustn’t be the loser from £100m scheme’ THE COMMUNITY benefits of the 800-home scheme to redevelop Bedminster Green must not be neglected if the site is developed piecemeal. That’s the message from campaigners anxious to limit the impact of the £100 million scheme masterminded by developer Urbis. But though Urbis has a deal with Bristol city council to draw up a masterplan for the area, it lost out in a bidding war for one of the largest plots. Developer Paul O’Brien is expected to announce public consultation soon on his plan for 217 flats on the former Pring & St Hill factory site, known as Plot 1. The BS3 Planning group, meeting on September 20, was shown proposals for two buildings on Plot 1 – one on Hereford Street ranging from 5 to about eight storeys. Discussions with a housing association may result in 40-50 homes for “affordable” rent. The bigger block is E shaped, with its solid side along Malago Road. It ranges from six storeys on the road side to 10 or 11 on the railway side. With 105 parking spaces and bin stores underneath, there will be no shops or windows on the ground floor. The masterplan calls for a doctor’s surgery, open spaces, a revamped Bedminster station, a major cycle route, uncovering the River Malago and other costly community benefits. Neil Sellers, who chairs BS3

Dealing with plots piecemeal ‘may risk benefits of masterplan’

Planning, is worried that if the plots are dealt with singly, these benefits may not materialise, or may be placed outside the area. A new school is envisaged as a long-term benefit, but no site has been identified. “You could go round in everdecreasing circles,” he said, without all the benefits being provided. Richard Clarke, managing director of Urbis, said many of the community benefits would be delivered directly by Urbis if it is allowed to develop Plots 4 and 5. Plot 4 will have a medical centre and a car park, while Plot 5 includes the new station, roads, and the cycleway. But these benefits can only be paid for, he warned, if enough homes are allowed, and that will mean high-rises. Dianne James of WHaM, the Windmill Hill and Malago planning group, told the Voice the residents still had concerns. “We are concerned about the density of it – going up into the air isn’t the only way,” she said. WHaM objects to the risk of air pollution, the effects on landscaping and the public realm,

Planned: New energy centre and the fear that community facilities will not be built. And there are fears that the planning applications could stray from the masterplan. The loss of jobs from industrial buildings in

Whitehouse Lane also needs to be discussed, she said. “There needs to be more consultation – we are finding that people who live in the area don’t know what’s happening,” she said. BS3 Planning has also asked the Paul O’Brien team whether their plan will cast homes into shadow on the other side of Malago Road during the winter. Meanwhile Urbis is expected to have submitted a planning application for a highly efficient district energy centre by the beginning of October. A pre-planning application for Plot 5 has been submitted, to be followed by a formal application near the end of the year. • Letters: Page 19

Get a flu jab to stay protected IF YOU want the best chance of staying well this winter, get a flu jab, older and vulnerable people are being advised. Bristol’s Lord Mayor, Jeff Lovell, volunteered to have his own vaccination done while visiting Bedminster Pharmacy in Cannon Street. Pharmacy owner Ade Williams showed Cllr Lovell how quickly and painlessly the annual jab can be given. It protects against flu and for complications

such as pneumonia, which can be very serious for older people and those who have heart, chest or immune system problems. Mr Williams told the Lord Mayor how his staff have been specially trained in community health work, like many others at pharmacies all over Bristol, as part of the Well Aware campaign. “I think it’s outstanding what you are doing, what with the challenges facing GP surgeries,” Cllr Lovell said.