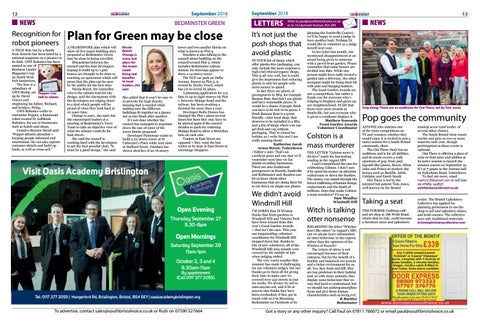 Plan for Green may be close

A TECH firm run by a family from Knowle has been listed by a national magazine as a pioneer in its field. GWS Robotics has been named as one of Business Leader Magazine’s top 32 South West tech businesses. The firm is a subsidiary of GWS Media, set Pepper: Can up by David talk to clients Graves and employing his father, Richard, and brother, Philip. GWS Robotics works to customise Pepper, a humanoid robot created by SoftBank Robotics, for use in businesses such as hotels and shops. Creative director David said: “Pepper attracts attention – keeping people informed and entertained. He can also capture customer details and build up leads, as well as cross-sell.”

show all five major building sites proposed at Bedminster Green may be close to being unveiled. Discussions between the council and the four developers hoping to build up to 1,500 homes are thought to be close to reaching an agreement which will mean that the plan can be seen by the public for the first time. Nicola Beech, the councillor who is the cabinet lead for city design, said the discussions with the developers are edging closer to a deal which people will be proud of when they look back in 10 years time. Change is scary, she said, but she encouraged traders at a meeting of Bedminster’s Town Team to take an objective view of what the scheme could do for East Street. She said the council is working hard with the developers to get the best possible deal: “It must be a good design,” she said.

Beech: Change is scary, but plans for the Green could bring real benefits to local traders, she says

She added that it won’t be easy to to provide the high density housing that is needed while making sure the different buildings fit together as a jigsaw, not as one block after another. It’s not clear whether the council has managed to negotiate down the size of some of the tower blocks proposed. Developer Firmstone wants to build a 22-storey tower at St Catherine’s Place while next door at Stafford Street, Dandara has shown sketches of an 18-storey

tower and two smaller blocks on what is known as Plot 4. Dandara is also talking to the council about building on the council-owned Plot 5, which includes Bedminster railway station. Its drawings appear to show a 14-storey tower. The NCP car park on Dalby Avenue, known as Plot 3, is owned by Deeley Freed, which has yet to reveal its plans. A planning application for 215 flats in up to eight storeys on Plot 1, between Malago Road and the railway, has been awaiting a decision for more than a year. Developer Rollo Homes has changed the Plot 1 plans several times but fears they may have to be altered again if the council decides to push for widening Malago Road to allow a Metrobus lane on each side. Traders in East Street are opposed – they want the bus routes to be kept in East Street to encourage shoppers.

Write to paul@southbristolvoice.co.uk LETTERS or to 18 Lilymead Avenue, BS4 2BX

It’s not just the posh shops that avoid plastic IN YOUR list of shops which offer plastic-free packaging, you only include the more expensive, high-end ethical/organic shops. This is all very well, but it could give the impression that reducing plastic is only for people with more money to spend. In fact there are plenty of greengrocers in BS4, for example Banana Boat, that don’t use plastic and have reasonable prices. It would be a shame if people think you have to be rich to be green. I think Banana Boat is a great, friendly, value local shop, that deserves to be included in a BS3 and 4 list of shops where you can get fruit and veg without packaging. They’re closed for holiday as I write this and I am really missing them!  Katherine Jacob Arnos Street, Totterdown • Editor’s note: That’s an excellent point and one that we’ll remember next time we list plastic-avoiding businesses. There are also traditional greengrocers in Knowle, Southville and Bedminster and. Readers can let us know about other businesses that are doing their bit to cut down on single-use plastic.

We didn’t avoid Windmill Hill I’M SORRY that Di Weston thinks that front gardens in Windmill Hill and Victoria Park have been missed from this year’s Good Garden Awards – that isn’t the case. This year our longstanding volunteer coordinator for Windmill Hill stepped down but, thanks to lots of new volunteers, all of the Windmill Hill area rounds were covered by the middle of July when judging ended. The very warm weather this summer has made it challenging for our volunteer judges, but our thanks go to them all for giving their time to make sure we covered over 250 streets in just six weeks. We always try not to miss anyone out, and if Di or anyone else thinks they have been overlooked, if they get in touch with us (via Blooming Bedminster on Facebook or by

phoning the Southville Centre), we’ll be happy to send a judge to have another look. Perhaps Di would like to volunteer as a judge herself next year. In her letter last month, she mentioned disappointment at an award being given to someone with a paved front garden. Please remember that some houses are divided into flats. While one person might have sadly turned a garden into a driveway, the other occupant might be doing their bit with pots and hanging baskets. The Good Garden Awards are not a competition, but rather a thank-you for everyone who’s helping to brighten and green up our neighbourhood. Di felt that there were more awards in Southville, but not everyone who is given a certificate displays it. Matthew Symonds Front Garden Awards Volunteer Coordinator

Colston is a mass murderer THE LETTER “Colston move is divisive” made for fascinating reading in the August SBV. I can’t comprehend the case for celebrating Colston. I don’t care if he spent his money on altruistic endeavours or down the bookies. The money was raised through the forced trafficking of human beings, enslavement and the death of millions. Does that make Colston a mass murderer? I’d say so. Sam Meadley Windmill Hill

Witch is talking otter nonsense REGARDING the letter “Witches don’t like otters” in August’s SBV, can we please leave information on otter behaviour to the experts rather than the opinions of the Witches of Knowle? The return of otters is not encouraged because of their cuteness, but for the benefit of a healthy and balanced eco system and a richer environment for us all. Yes, they hunt and kill, they are top predetors in their habitat and, as with many animals, they display some behaviour that we may find hard to understand, but we should not anthropomorphise them and give them human characteristics such as being evil. R Buckley Bedminster

Sing along: There are no auditions for Out There, led by Tom Jones

Pop goes the community ANYONE who watches one of the choir competitions on TV and wonders whether they would enjoy it is invited to join a taster session for a South Bristol community choir. The Out There choir has no auditions and is for all abilities, and its music covers a wide spectrum of pop, from past legends like Queen, Bowie, Elton John and Prince to modern day heroes such as Bastille, Adele, Coldplay and Emeli Sandé. Out There is led by the talented but patient Tom Jones, well-known on the Bristol

musical scene (and leader of several other choirs). The South Bristol choir meets weekly and puts on two or more concerts each year, though participation in these events is optional. Out There is offering a glass of wine or fruit juice and nibbles at its taster session to launch the autumn season on September 19. It’s at 7.30pm in the Jarman hall on Sydenham Road, Totterdown. To find out more, email markcs238@gmail.com or call him on 07985 145837. outtheremusicbristol.co.uk

centre. The Bristol Upholstery Collective has applied for planning permission to use the shop to sell and upholster chairs, and hold courses. The collective uses only traditional materials. bristolupholsterycollective.com

THE FORMER Craftisan café and art shop at 186 Wells Road, which shut in July, could become a furniture store and upholstery