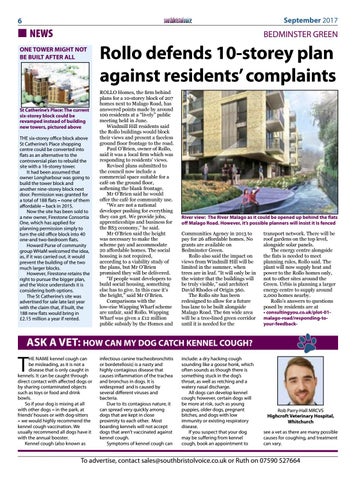 n NEWS ONE TOWER MIGHT NOT BE BUILT AFTER ALL

St Catherine’s Place: The current six-storey block could be revamped instead of building new towers, pictured above THE six-storey office block above St Catherine’s Place shopping centre could be converted into flats as an alternative to the controversial plan to rebuild the site with a 16-storey tower. It had been assumed that owner Longharbour was going to build the tower block and another nine-storey block next door. Permission was granted for a total of 188 flats – none of them affordable – back in 2015. Now the site has been sold to a new owner, Firestone Consortia One, which has applied for planning permission simply to turn the old office block into 40 one-and two-bedroom flats. Howard Purse of community group WHaM welcomed the idea, as, if it was carried out, it would prevent the building of the two much larger blocks. However, Firestone retains the right to pursue the bigger plan, and the Voice understands it is considering both options. The St Catherine’s site was advertised for sale late last year with the claim that, if built, the 188 new flats would bring in £2.15 million a year if rented.

Rollo defends 10-storey plan against residents’ complaints ROLLO Homes, the firm behind plans for a 10-storey block of 207 homes next to Malago Road, has answered points made by around 100 residents at a “lively” public meeting held in June. Windmill Hill residents said the Rollo buildings would block their views and present a faceless ground floor frontage to the road. Paul O’Brien, owner of Rollo, said it was a local firm which was responding to residents’ views. Revised plans submitted to the council now include a commercial space suitable for a café on the ground floor, softening the blank frontage. Mr O’Brien said he would offer the café for community use. “We are not a national developer pushing for everything they can get. We provide jobs, apprenticeships and business for the BS3 economy,” he said. Mr O’Brien said the height was necessary to make the scheme pay and accommodate 20 affordable homes. The social housing is not required, according to a viability study of the plans, but Mr O’Brien promised they will be delivered. “If people want developers to build social housing, something else has to give. In this case it’s the height,” said Mr O’Brien. Comparisons with the low-rise Wapping Wharf scheme are unfair, said Rollo. Wapping Wharf was given a £12 million public subsidy by the Homes and

River view: The River Malago as it could be opened up behind the flats off Malago Road. However, it’s possible planners will insist it is fenced Communities Agency in 2013 to pay for 26 affordable homes. No grants are available on Bedminster Green. Rollo also said the impact on views from Windmill Hill will be limited in the summer, when trees are in leaf. “It will only be in the winter that the buildings will be truly visible,” said architect David Rhodes of Origin 360. The Rollo site has been redesigned to allow for a future bus lane to be built alongside Malago Road. The 6m wide area will be a tree-lined green corridor until it is needed for the

transport network. There will be roof gardens on the top level, alongside solar panels. The energy centre alongside the flats is needed to meet planning rules, Rollo said. The plant will now supply heat and power to the Rollo homes only, not to other sites around the Green. Urbis is planning a larger energy centre to supply around 2,000 homes nearby. Rollo’s answers to questions posed by residents are at • consultingyou.co.uk/plot-01malago-road/responding-toyour-feedback-

ASK A VET: HOW CAN MY DOG CATCH KENNEL COUGH?

HE NAME kennel cough can be misleading, as it is not a disease that is only caught in kennels. It can be caught through direct contact with affected dogs or by sharing contaminated objects such as toys or food and drink bowls. So if your dog is mixing at all with other dogs – in the park, at friends’ houses or with dog-sitters – we would highly recommend the kennel cough vaccination. We usually recommend all dogs have it with the annual booster. Kennel cough (also known as

infectious canine tracheobronchitis or bordetellosis) is a nasty and highly contagious disease that causes inflammation of the trachea and bronchus in dogs. It is widespread and is caused by several different viruses and bacteria. Due to its contagious nature, it can spread very quickly among dogs that are kept in close proximity to each other. Most boarding kennels will not accept dogs that aren’t vaccinated against kennel cough. Symptoms of kennel cough can

include: a dry hacking cough sounding like a goose honk, which often sounds as though there is something stuck in the dog’s throat, as well as retching and a watery nasal discharge. All dogs can develop kennel cough; however, certain dogs will be more at risk, such as young puppies, older dogs, pregnant bitches, and dogs with low immunity or existing respiratory disease. If you suspect that your dog may be suffering from kennel cough, book an appointment to

Rob Parry-Hall MRCVS Highcroft Veterinary Hospital, Whitchurch see a vet as there are many possible causes for coughing, and treatment can vary.