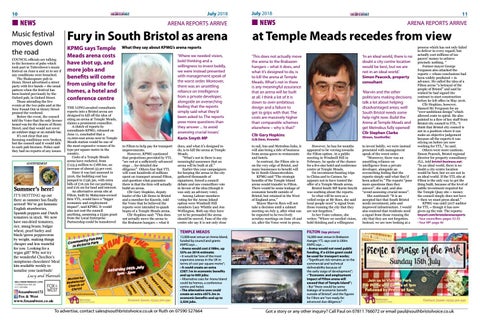 n NEWS Music festival moves down the road COUNCIL officials are talking to the licensees of pubs which took part in Totterdown’s music festival on June 9 and 10 to see if any conditions were breached. The Shakespeare pub in Henry Street advertised a street party with live bands – the usual pattern when the festival has been hosted previously by the Oxford pub, in Oxford Street. Those attending the live events at the two pubs and at the New Found Out in Henry Street praised the weekend. Before the event, the council told the Voice that the only licence issued was for the closure of Henry Street, and that would not cover an outdoor stage or an outside bar. It’s not clear that any licensing conditions were broken, but the council said it would talk to each pub licensee. Police said they had no reports of any issues. ADVERTISEMENT

Summer’s here! IT’S HOTTING up out there as summer has finally arrived! We’ve got fantastic English strawberries, Spanish peppers and Dutch tomatoes in stock. We now have sun-dried tomatoes, rice, mung beans, bulgar wheat, pearl barley and black/green peppercorns by weight, making things cheaper and less wasteful for you. Looking for a vegan gift? Why not try the wonderful ChocBox’s sumptuous chocolates! Meal kits available weekly to tantalise your tastebuds!

Fury in South Bristol as arena KPMG says Temple Meads arena costs have shot up, and more jobs and benefits will come from using site for homes, a hotel and conference centre THE LONG-awaited consultants reports into a Bristol arena are designed to kill off the idea of siting an arena at Temple Meads, claims a prominent councillor. A clutch of reports by consultants KPMG, released on June 11, concluded that a 12,000-seat arena next to Temple Meads station would be one of the most expensive venues of its type per square metre in the country. Costs of a Temple Meads arena have rocketed, from £123.5 million to £188.6m, an increase of almost 53 per cent. Since it was last assessed in 2016, the building cost has jumped to £156.3m, with extra bills of £16.2m for car parking and £16.1m for land and interest. An alternative arena site at Filton, built by Malaysian-owned firm YTL, would have a “bigger economic and employment impact”, said KPMG. It would also not cost the council anything, assuming a £53m grant from the Local Enterprise Partnership could be transferred

at Temple Meads recedes from view

What they say about KPMG’s arena reports

to Filton to help pay for transport improvements. However, KPMG cautioned that projections provided by YTL “are not at a sufficiently advanced stage … for detailed due diligence”. Others fear that YTL will want hundreds of millions spent on transport around Filton, and question what guarantee there is that the firm will actually build an arena. Cllr Gary Hopkins, deputy leader of the Lib Dems in Bristol and a member for Knowle, told the Voice that he believed the reports were intended to quash hopes of a Temple Meads arena. Cllr Hopkins said: “This does not actually move the arena to the Brabazon hangars – what it

‘Where we needed vision, bold thinking and a willingness to invest boldly, we were instead presented with management speak of the worst order. Moreover, there was an unsettling reliance on intelligence from a private developer, alongside an overarching feeling that the reports simply said what they’d been asked to. The reports pose more questions than they answer ... to avoid assessing crucial issues.’ Karin Smyth MP

‘This does not actually move the arena to the Brabazon hangars – what it does, and what it’s designed to do, is to kill the arena at Temple Meads. What’s not in there is any meaningful assurance that an arena will be built at all. I think a lot of it is down to over-ambitious design and a failure to get to grips with that. The costs are massively higher than comparable schemes elsewhere – why is that?’

does, and what it’s designed to do, is to kill the arena at Temple Meads. “What’s not in there is any meaningful assurance that an arena will be built at all.” Earlier this year campaigners for keeping the arena in the city gathered thousands of signatures, forced a council debate and saw councillors vote in favour of the idea (though it was only an advisory vote). Among Labour members voting for the Arena Island option were Windmill Hill members Lucy Whittle and Jon Wellington. Both say they have yet to be persuaded the arena should be moved. Fans of the city centre site say it is not only close

to rail, bus and Metrobus links, it will also bring a tide of business from arena-goers to restaurants and hotels. In contrast, the Filton site is on the very edge of Bristol, and many businesses to benefit will be in South Gloucestershire. KPMG said “The strategic benefits of the Temple Island arena would transfer to Filton. There would be some leakage of economic benefit outside of Bristol, but retained in the West of England area.” Mayor Marvin Rees will not take a decision until a cabinet meeting on July 3, after what can be expected to be two lively scrutiny meetings on June 18 and 20, after the Voice went to press.

‘In an ideal world, there is no doubt a city centre location would be best, but we are not in an ideal world.’ Simon Peacock, property consultant ‘Marvin and the other politicians making decisions talk a lot about helping disadvantaged areas; well South Bristol needs some help right now. Build the Arena at Temple Meads and get Metrobus fully opened! Cllr Stephen Clarke

However, he has for months appeared to be veering towards the Filton option. At a public meeting in Windmill Hill in February, he spoke of the chance for a five-star hotel and conference centre at Temple Meads. On investment-hunting trips to China and to Cannes, he appears not to have touted the offer of a Temple Meads arena. Bristol South MP Karin Smyth was scathing about the reports. In what will be seen as a veiled swipe at Mr Rees, she said local people need “a signal from those running the city that they are not forgotten.” In her Voice column, she writes: “Where we needed vision, bold thinking and a willingness

to invest boldly, we were instead presented with management speak of the worst order. “Moreover, there was an unsettling reliance on intelligence from a private developer, alongside an overarching feeling that the reports simply said what they’d been asked to.” The reports “pose more questions than they answer”, she said, and also “avoid assessing crucial issues”. She continued: “It is an accepted fact that South Bristol needs investment, jobs and improved infrastructure. I would also contend that residents need a signal from those running the city that they are not forgotten. Instead, we are now looking at a

process which has not only failed to deliver in every regard, but actually cost millions of tax payers’ money to achieve precisely nothing. ” Former mayor George Ferguson also attacked the reports – whose conclusions had been widely predicted – in advance. He called the idea of a Filton arena “a betrayal of the people of Bristol” and said he wished he had signed the contract to start construction before he left office in May 2016. Cllr Hopkins, however, blamed Mr Ferguson for an “over-ambitious design” which allowed costs to spiral. He also pointed to a flow of key staff from Bristol city council to YTL. “I think that Bristol city council is not in a position where it can make an objective judgement because all the experts it was relying on before are now working for YTL,” he said. Others were more cautious. Simon Peacock, Bristol regional director for property consultancy JLL, told bristol-business.net: “In an ideal world, there is no doubt a city centre location would be best, but we are not in an ideal world. If the YTL site at Filton is the only way to get the thing built, because of the level of public investment required for the Temple Quay site – money the council simply does not have – then we must press ahead.” KPMG was until 2017 auditor for YTL – though it has now given up the role. The reports: tinyurl.com/bristolarenareports • Your councillors: pages 32-33 • Your MP: page 46

FILTON (top picture) 16,000-seat venue in Brabazon Hanger; YTL says cost is £80m KMPG says ... • Arena would not need public funding, if a £53m grant could be used for transport works; • “Significant risk remains as to the commercial and technical deliverability because of the early stage of development”; • “Economic and employment impact of Filton arena will exceed that of Temple Island”; • But “there would be some leakage of economic benefit outside of Bristol”, and the figures for Filton are “not ready for advanced due diligence.”