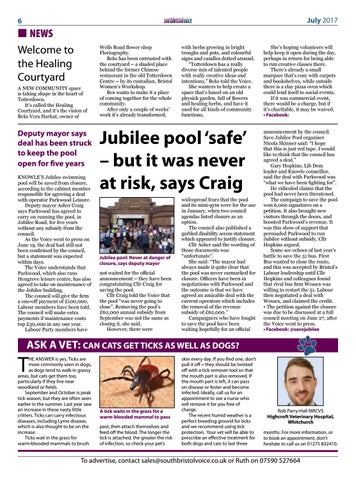 Deputy mayor says deal has been struck to keep the pool open for five years KNOWLE’S Jubilee swimming pool will be saved from closure, according to the cabinet member responsible for agreeing a deal with operator Parkwood Leisure. Deputy mayor Asher Craig says Parkwood has agreed to carry on running the pool, in Jubilee Road, for five years without any subsidy from the council. As the Voice went to press on June 19, the deal had still not been confirmed by the council, but a statement was expected within days. The Voice understands that Parkwood, which also runs Hengrove leisure centre, has also agreed to take on maintenance of the Jubilee building. The council will give the firm a one-off payment of £100,000, Labour members have been told. The council will make extra payments if maintenance costs top £30,000 in any one year. Labour Party members have

Wells Road flower shop Floriography. Beks has been entrusted with the courtyard – a shaded place behind the former Chinese restaurant in the old Totterdown Centre – by its custodian, Bristol Women’s Workshop. Bex wants to make it a place of coming together for the whole community. After only a couple of weeks’ work it’s already transformed,

with herbs growing in bright troughs and pots, and colourful signs and candles dotted around. “Totterdown has a really diverse mix of talented people with really creative ideas and intentions,” Beks told the Voice. She wanters to help create a space that’s based on an old physick garden, full of flowers and healing herbs, and have it used for all kinds of community functions.

Jubilee pool ‘safe’ – but it was never at risk, says Craig

Jubilee pool: Never at danger of closure, says deputy mayor not waited for the official announcement – they have been congratulating Cllr Craig for saving the pool. Cllr Craig told the Voice that the pool “was never going to close”. Removing the pool’s £62,000 annual subsidy from September was not the same as closing it, she said. However, there were

widespread fears that the pool and its mini-gym were for the axe in January, when two council agendas listed closure as an option. The council also published a garbled disability access statement which appeared to justify closure. Cllr Asher said the wording of those documents was “unfortunate”. She said: “The mayor had always made it quite clear that the pool was never earmarked for closure. Officers have been in negotiations with Parkwood and the outcome is that we have agreed an amicable deal with the current operators which includes the removal of the revenue subsidy of £62,000.” Campaigners who have fought to save the pool have been waiting hopefully for an official

She’s hoping volunteers will help keep it open during the day, perhaps in return for being able to run creative classes there. There’s already a small marquee that’s cosy with carpets and bookshelves, while outside there is a clay pizza oven which could lend itself to social events. If it was commercial event, there would be a charge, but if it’s charitable, it may be waived. • Facebook: announcement by the council. Save Jubilee Pool organiser Nicola Skinner said: “I hope that this is just red tape. I would like to think that the council has agreed a deal.” Gary Hopkins, Lib Dem leader and Knowle councillor, said the deal with Parkwood was “what we have been fighting for”. He ridiculed claims that the pool had never been threatened. The campaign to save the pool won 6,000 signatures on a petition. It also brought new visitors through the doors, and boosted Parkwood’s revenue. It was this show of support that persuaded Parkwood to run Jubilee without subsidy, Cllr Hopkins argued. Some see echoes of last year’s battle to save the 51 bus. First Bus wanted to close the route, and this was accepted by Bristol’s Labour leadership until Cllr Hopkins and colleagues found that rival bus firm Wessex was willing to restart the 51. Labour then negotiated a deal with Wessex, and claimed the credit. • The petition against the closure was due to be discussed at a full council meeting on June 27, after the Voice went to press. • Facebook: @savejubilee

ASK A VET: CAN CATS GET TICKS AS WELL AS DOGS?

HE ANSWER is yes. Ticks are more commonly seen in dogs, as dogs tend to walk in grassy areas, but cats get them too, particularly if they live near woodland or fields. September and October is peak tick season, but they are often seen earlier in the summer. Last year saw an increase in these nasty little critters. Ticks can carry infectious diseases, including Lyme disease, which is also thought to be on the increase. Ticks wait in the grass for warm-blooded mammals to brush

A tick waits in the grass for a warm-blooded mammal to pass past, then attach themselves and feed off the blood. The longer the tick is attached, the greater the risk of infection, so check your pet’s

skin every day. If you find one, don’t pull it off – they should be twisted off with a tick remover tool so that the mouth part is also removed. If the mouth part is left, it can pass on disease or fester and become infected. Ideally, call us for an appointment to see a nurse who will remove it for you free of charge. The recent humid weather is a perfect breeding ground for ticks and we recommend using tick protection. Your vet will be able to prescribe an effective treatment for both dogs and cats to last three

Rob Parry-Hall MRCVS Highcroft Veterinary Hospital, Whitchurch months. For more information, or to book an appointment, don’t hesitate to call us on 01275 832410.