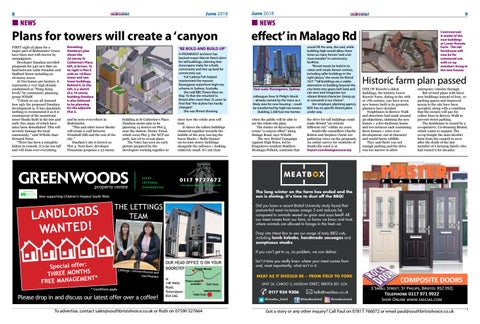 Plans for towers will create a ‘canyon

FIRST sight of plans for a major part of Bedminster Green have been met with horror by campaigners. Developer Dandara unveiled proposals for 340 new flats on land between Little Paradise and Stafford Street including an 18-storey tower. At 700 homes per hectare, it represents a very high density condemned as “Hong Kong levels” by community planning group WHaM. “I think we are all stunned how ugly the proposed Dandara development is. It has absolutely nothing to recommend it as it is reminiscent of the monstrous tower blocks built in the 60s and early 70s, many of which have since been demolished. This will severely damage the local community,” said WHaM chair Howard Purse. “There has been a complete failure to consult. It is far too tall and will loom over everything

Revealing: Dandara’s plan shows the 22-storey St Catherine’s Place, left, in brown. To its right is Plot 4 with an 18-floor tower and two lower buildings. Behind it, to the left, is a sketch of a 14-storey building Dandara is also believed to be planning for the adjacent Plot 5.

A PROMINENT architect has backed mayor Marvin Rees’s drive for tall buildings, claiming that skyscrapers make for a lively community and free up land for community use. Yuli Cadney-Toh helped mastermind the massive Barangaroo waterfront high-rise scheme in Sydney, Australia. She told BBC Points West on May 16 that she returned to Bristol after more than 25 years to find that “the skyline has hardly changed”. She was filmed showing building at St Catherine’s Place. Dandara seems also to be planning 14 storeys on Plot 5, near the station. Deeley Freed, which owns Plot 3, the NCP car park, has yet to reveal plans. The Voice has seen an early picture prepared by the developers working together to

show how the whole area will look. It shows the tallest buildings clustered together towards the middle of the area, leaving the lower blocks – Rollo Homes’ six-to-nine storey buildings alongside the railways – looking relatively small. It’s not clear

when the public will be able to see the whole-site plan. The cluster of skyscrapers will create “a canyon effect” along Malago Road, says WHaM. The new Bristol Campaign Against High Rises, led by Kingsdown resident Matthew Montagu-Pollock, contends that

the drive for tall buildings could make Bristol “an entirely different city” within 20 years. Southville councillors Charlie Bolton and Stephen Clarke are gathering views on the proposals. An online survey for residents of Southville ward is at tinyurl.com/bedsgreensurvey

Controversial: A model of the new buildings at Lower Knowle Farm. The old farmhouse will now be for communal use, with co-op members living in the new houses

ONE OF Knowle’s oldest buildings, the historic Lower Knowle Farm, dating to the 16th or 17th century, can have seven new homes built in its grounds, planners have decided. Neighbours in Berrow Walk and elsewhere had made around 30 objections, claiming the new homes – a five-bedroom house and two terraces each containing three houses – were overdevelopment, out of character and would harm wildlife. They said there was not enough parking and the drive was too narrow to allow

emergency vehicles through. But revised plans with three new buildings instead of four, 10 parking spaces and improved access to the site have been accepted, along with a condition that the owners will pay for yellow lines in Berrow Walk to prevent street parking. The farmhouse is owned by a co-operative, Co-Housing Bristol, which wants to expand. The co-op bought the near-derelict farm from the council in 2012 after the death of the last member of a farming family who had rented it for decades.

The long winter on the farm has ended and the sun is shining. It’s time to dust off the BBQ!

colleagues how St Philip’s Marsh – already named by the Voice as a likely area for new housing – could be transformed by high-rise towers. Building 2,500 low-rise homes

would fill the area, she said, while building high would allow three times as many homes “and a lot more besides” in community facilities. “Bristol needs be bold in its vision and create denser centres, including taller buildings in the right places,” she wrote for Bristol 24/7. “Tall buildings are a viable alternative to building beyond the city limits into green belt land and can save and invigorate our vibrant Bristol character. Going up or outwards is our choice.” Her employer, planning agency BDP, has no specific Bristol plans under way.

‘BE BOLD AND BUILD UP’

and be seen everywhere in Bedminster. “This and other tower blocks will create a wall between Windmill Hill and the rest of the city.” Dandara’s site is known as Plot 4. Next door, developer Firmstone proposes a 22-storey

Did you know a recent Bristol University study found that pasture-fed meat increases omega 3 and reduces fat, compared to animals reared on grain and soya feed? All our meat comes from our farm, or farms we know and trust, where animals are allowed to forage in the fresh air. Drop into Meat Box to see our range of tasty BBQ cuts, including lamb kebabs, handmade sausages and sumptuous steaks. If you can’t get to us, no problem, we can deliver.

Please drop in and discuss our latest offer over a coffee!

OUR HEAD OFFICE IS ON YOUR Temple Meads DOORSTEP at 148 Wells Road, Totterdown BS4 2AG

Isn’t it time you really knew where your meat comes from and, most importantly, what isn’t in it. MEAT AS IT SHOULD BE – FROM FIELD TO FORK