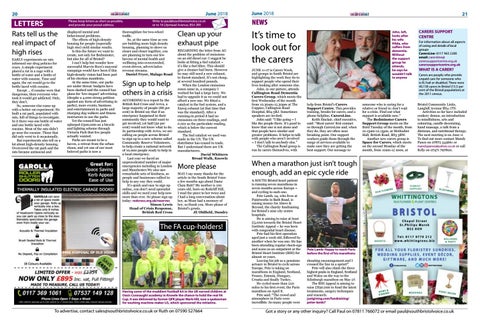 Please keep letters as short as possible, Write to paul@southbristolvoice.co.uk LETTERS and provide your postal address. or to 18 Lilymead Avenue, BS4 2BX thoroughfare for two-wheel mental and Rats tell us the displayed Clean up your traffic. behavioural problems. So, at the same time as you The effects of high-density are building more high density housing for people (especially real impact of exhaust pipe housing, planning to shove us high rise) yield similar results. REGARDING the letter from AG closer and closer together, you Is this the future we want to high rises about the problem of emissions are planning to turn our few create, not only for Bedminster, EARLY experiments on rats informed our drug policies for years. A simple experiment placed a rat in a cage with a bottle of water and a bottle of water with cocaine. Time and again, the rat would go to the bottle laced with cocaine. Except ... if cocaine were that dangerous, then everyone who took it would get addicted. Only, they don’t. So, someone else came up with a better rat experiment. He built a rat park, populated with rats, full of things to investigate. In it there was one bottle of water and one bottle laced with cocaine. Most of the rats didn’t go near the cocaine. Those that did only went to it occasionally. Rat experiments also tell us a lot about high-density housing. Overcrowd the rat park and the rats became antisocial and

but also for all of Bristol? I can’t help but wonder how successful Marvin Rees’s mayoral campaign would have been if this high-density vision had been part of his election manifesto. At the same time, our parks are under threat: budgets have been slashed and the council has plans for ‘low-impact’ advertising (despite a 4,000 strong petition against any form of advertising in parks), more events, business and entertainment in parks and charging dog walkers and fitness instructors to use the parks. Yet the council has just splurged £500,000 on a bicycle and lighting scheme through Victoria Park that few people actually wanted. Parks are meant to be a haven, a retreat from the urban chaos, and yet one of our most beloved parks is now a

Sign up to help others in a crisis ACCORDING to a report by the British Red Cross and Aviva, a large majority of people (88 per cent) in Bristol say that if an emergency happened in their community they would want to get involved, yet half (50 per cent) would not know what to do. In partnership with Aviva, we are calling on people across Bristol to sign up to a new scheme called Community Reserve Volunteers, to help create a national network of 10,000 people ready to help in a local emergency. Last year we faced an unprecedented number of major emergencies including in London and Manchester.We also saw remarkable acts of kindness, as people and businesses rallied to help in any way they could. It’s quick and easy to sign up online, you don’t need specialist skills and we need your help now more than ever. So please sign up today: redcross.org.uk/reserves Simon Lewis Head of Crisis Response, British Red Cross

on an old diesel car: I suggest he looks at fitting a fuel catalyst – it’s like a fuel filter. This should give a cleaner fuel burn. However he may still need a new exhaust, to Euro6 standard. It’s not cheap, at several hundred pounds. When the London emissions zones came in, a company I worked for had a large lorry. We had to upgrade it as we could not afford a new one. We fitted a catalyst in the fuel system, and a Euro5 exhaust (at that time that was the standard). After a running-in period it had no emissions on three readings, and 0.001 as the particulate reading, which is below the current standard. The fuel catalyst we used was made in the US. The UK distributor has ceased to trade. But I understand there are UK manufacturers. David Whittern Broad Walk, Knowle

More please MAY I say many thanks for the article in the South Bristol Voice a few months ago about Dame Clara Butt? My mother is 100 years old, born on Redcliff Hill. I read the piece to her twice and I had a long conversation about her, as Mum had a memory of her, so thank you. More please of Bristol’s greats. JE Oldfield, Dundry

Having some of the muddiest football kit in the UK earned children at Oasis Connaught academy in Knowle the chance to hold the real FA Cup. It was delivered by former QPR player Mark Hill, now a spokesman for washing machine maker LG, which sponsored the initiative.

It’s time to look out for the carers JUNE 11-17 is Carers Week, and groups in South Bristol are highlighting the work they do to support people who spend their lives looking after someone else. John, in our picture, attends Callington Road Dementia Carers Group, which meets the first Wednesday of the month from 10.30am-12.30pm at The Coppice, Callington Road Hospital, BS4 5BJ. Sometimes speakers are invited. John said: “I like going – I like the people there. It’s good to know that one is not alone and that people have similar and greater problems. It helps to talk with people who aren’t involved – I don’t talk to anybody else.” The Callington Road group is run by carers themselves, with

John, left, looks after his wife Hilda, who suffers from dementia. Without the support group he attends, he says he wouldn’t talk to anyone

help from Bristol’s Carers Support Centre. This provides training, breaks for carers, and a phone helpline, CarersLine. Keith Sinclair, chief executive, said: “Most carers’ first contact us through CarersLine and, when they do, they are often near breaking point. Our support workers guide them through the range of services available to make sure they are getting the best support. Our message to

someone who is caring for a relative or friend is: don’t wait for a crisis. Find out what support is available now.” The Bedminster Carers Support Group meets on the third Tuesday of the month, from 10.15am-12.15pm, at Methodist Hall, British Road, BS3 3BW. Another new carers group is Space for Carers, which meets on the second Monday of the month, from 10am-12 noon, at

WHAT IS A CARER? Carers are people who provide unpaid care for someone who is ill, frail or disabled. There were 40,138 carers in Bristol (13.5 per cent of the Bristol population) at the 2011 census. Bristol Community Links, Langhill Avenue BS4 1TN. Activities so far have included cookery demos, an introduction to mindfulness, arts and colouring, candle decorating, hand massage, a talk from a dietician, and nutritional therapy. The next meeting is on June 11 To find out more contact Mandy Panes on 07872 543661 or mandypanes@yahoo.co.uk or call Kelly on 07471 797800.

When a marathon just isn’t tough enough, add an epic cycle ride A SOUTH Bristol heart patient is running seven marathons in seven months across Europe – and cycling to each one. Pete Lamb, 24, who lives at Paintworks in Bath Road, is raising money for Above & Beyond, the charity fundraising for Bristol’s nine city centre hospitals. He is aiming to raise at least £5,000 towards the Bristol Heart Institute Appeal – he was born with congenital heart disease. Pete had his first operation aged just a week old, followed by another when he was one. He has been attending regular check-ups and scans as an outpatient at the Bristol Heart Institute (BHI) for almost 10 years. Leaving his job as a pensions actuary in Bristol to cycle across Europe, Pete is taking on marathons in England, Scotland, France, Estonia, Hungary, Croatia and finally Turkey. He cycled more than 220 miles to his first event, the Paris marathon on April 8. Pete said: “The crowd and atmosphere in Paris were incredible. So many people were

Pete Lamb: Happy to reach Paris before the first of his marathons shouting encouragement and I crossed the line in a sprint!” Pete will also climb the three highest peaks in England, Scotland and Wales on the way to the Edinburgh marathon on May 27. The BHI Appeal is aiming to raise £830,000 to fund the latest treatments, surgery techniques and research. justgiving.com/fundraising/ peter-lamb7