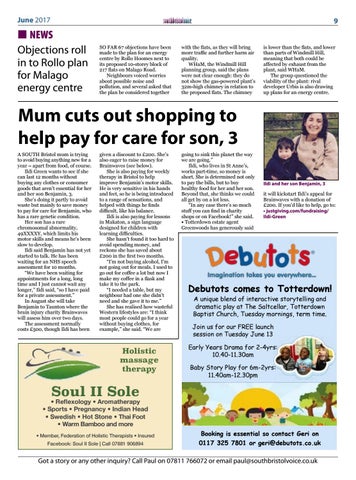 SO FAR 67 objections have been made to the plan for an energy centre by Rollo Hoomes next to its proposed 10-storey block of 217 flats on Malago Road. Neighbours voiced worries about possible noise and pollution, and several asked that the plan be considered together

with the flats, as they will bring more traffic and further harm air quality. WHaM, the Windmill Hill planning group, said the plans were not clear enough: they do not show the gas-powered plant’s 32m-high chimney in relation to the proposed flats. The chimney

is lower than the flats, and lower than parts of Windmill Hill, meaning that both could be affected by exhaust from the plant, said WHaM. The group questioned the viability of the plant: rival developer Urbis is also drawing up plans for an energy centre.

Mum cuts out shopping to help pay for care for son, 3 A SOUTH Bristol mum is trying to avoid buying anything new for a year – apart from food, of course. Ildi Green wants to see if she can last 12 months without buying any clothes or consumer goods that aren’t essential for her and her son Benjamin, 3. She’s doing it partly to avoid waste but mainly to save money to pay for care for Benjamin, who has a rare genetic condition. Her son has a rare chromosomal abnormality, 49XXXXY, which limits his motor skills and means he’s been slow to develop. Ildi said Benjamin has not yet started to talk. He has been waiting for an NHS speech assessment for 10 months. “We have been waiting for appointments for a long, long time and I just cannot wait any longer,” Ildi said, “so I have paid for a private assessment.” In August she will take Benjamin to Taunton where the brain injury charity Brainwaves will assess him over two days. The assessment normally costs £500, though Ildi has been

given a discount to £200. She’s also eager to raise money for Brainwaves (see below). She is also paying for weekly therapy in Bristol to help improve Benjamin’s motor skills. He is very sensitive in his hands and feet, so he is being introduced to a range of sensations, and helped with things he finds difficult, like his balance. Ildi is also paying for lessons in Makaton, a sign language designed for children with learning difficulties. She hasn’t found it too hard to avoid spending money, and reckons she has saved about £200 in the first two months. “I’m not buying alcohol, I’m not going out for meals. I used to go out for coffee a lot but now I make my coffee in a flask and take it to the park. “I needed a table, but my neighbour had one she didn’t need and she gave it to me.” She has realised how wasteful Western lifestyles are: “I think most people could go for a year without buying clothes, for example,” she said. “We are

going to sink this planet the way we are going.” Ildi, who lives in St Anne’s, works part-time, so money is short. She is determined not only to pay the bills, but to buy healthy food for her and her son. Beyond that, she thinks we could all get by on a lot less. “In any case there’s so much stuff you can find in charity shops or on Facebook!” she said. • Totterdown estate agent Greenwoods has generously said

Ildi and her son Benjamin, 3 it will kickstart Ildi’s appeal for Brainwaves with a donation of £200. If you’d like to help, go to: • justgiving.com/fundraising/ Ildi-Green