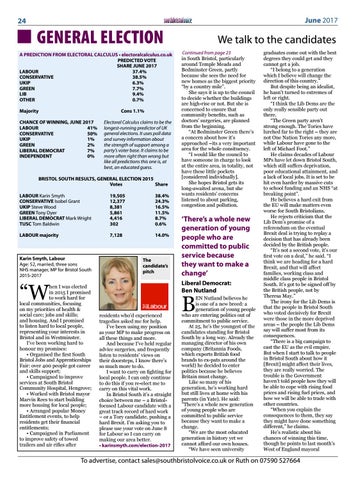 Cons 1.1% Electoral Calculus claims to be the longest-running predictor of UK general elections. It uses poll data and survey information about the strength of support among a party’s voter base. It claims to be more often right than wrong but like all predictions this one is, at best, an educated guess.

hen I was elected in 2015 I promised to work hard for local communities, focusing on my priorities of health & social care; jobs and skills; and housing. And I promised to listen hard to local people, representing your interests in Bristol and in Westminster. I’ve been working hard to honour my promises: • Organised the first South Bristol Jobs and Apprenticeships Fair: over 400 people got career and skills support; • Campaigned to improve services at South Bristol Community Hospital, Hengrove; • Worked with Bristol mayor Marvin Rees to start building more housing for local people; • Arranged popular Money Entitlement events, to help residents get their financial entitlements; • Campaigned in Parliament to improve safety of towed trailers and air rifles after

We talk to the candidates Continued from page 23 in South Bristol, particularly around Temple Meads and Bedminster Green, partly because she sees the need for new homes as the biggest priority “by a country mile”. She says it is up to the council to decide whether the buildings are high-rise or not. But she is concerned to ensure that community benefits, such as doctors’ surgeries, are planned from the beginning. “At Bedminster Green there’s a concern about how it’s approached –its a very important area for the whole consituency. “I would like the council to have someone in charge to look at the entire area, in totality, not have these little pockets [considered individually]. She hopes Bristol gets its long-awaited arena, but she wants residents’ concerns listened to about parking, congestion and pollution.

‘There’s a whole new generation of young people who are committed to public service because they want to make a change’ Liberal Democrat: Ben Nutland

residents who’d experienced tragedies asked me for help. I’ve been using my position as your MP to make progress on all these things and more. And because I’ve held regular advice surgeries, and frequently listen to residents’ views on their doorsteps, I know there’s so much more to do. I want to carry on fighting for local people. I can only continue to do this if you re-elect me to carry on this vital work. In Bristol South it’s a straight choice between me – a Bristolfocused Labour candidate with a great track record of hard work – or a Tory candidate, pushing a hard Brexit. I’m asking you to please use your vote on June 8 for Labour so I can carry on making our area better. • karinsmyth.com/election-2017

EN Nutland believes he is one of a new breed: a generation of young people who are entering politics out of commitment to public service. At 25, he’s the youngest of the candidates standing for Bristol South by a long way. Already the managing director of his own company (Britannia Foods, which exports British food brands to ex-pats around the world) he decided to enter politics because he believes Britain must change. Like so many of his generation, he’s working hard but still lives at home with his parents (in Yate). He said: ”There’s a whole new generation of young people who are committed to public service because they want to make a change. “We are the most educated generation in history yet we cannot afford our own houses. “We have seen university

graduates come out with the best degrees they could get and they cannot get a job. “I belong to a generation which I believe will change the direction of this country.” But despite being an idealist, he hasn’t turned to extremes of left or right. “I think the Lib Dems are the only really sensible party out there. “The Green party aren’t strong enough. The Tories have lurched far to the right – they are not One Nation Tories any more, while Labour have gone to the left of Michael Foot.” He claims decades of Labour MPs have let down Bristol South, which still suffers deprivation, poor educational attainment, and a lack of local jobs. It is set to be hit even harder by massive cuts to school funding and an NHS “at breaking point”. He believes a hard exit from the EU will make matters even worse for South Bristolians. He rejects criticism that the Lib Dem’s promise of a referendum on the eventual Brexit deal is trying to replay a decision that has already been decided by the British people. “It’s not a second vote, it’s our first vote on a deal,” he said. “I think we are heading for a hard Brexit, and that will affect families, working class and middle class people in Bristol South. It’s got to be signed off by the British people, not by Theresa May.” The irony for the Lib Dems is that the people in Bristol South who voted decisively for Brexit were those in the more deprived areas – the people the Lib Dems say will suffer most from its consequences. “There is a big campaign to cast the EU as the evil empire. But when I start to talk to people in Bristol South about how it [Brexit] might affect their lives, they are really worried. The trouble is the Government haven’t told people how they will be able to cope with rising food prices and rising fuel prices, and how we will be able to trade with other countries. “When you explain the consequences to them, they say they might have done something different,” he claims. He’s realistic about his chances of winning this time, though he points to last month’s West of England mayoral