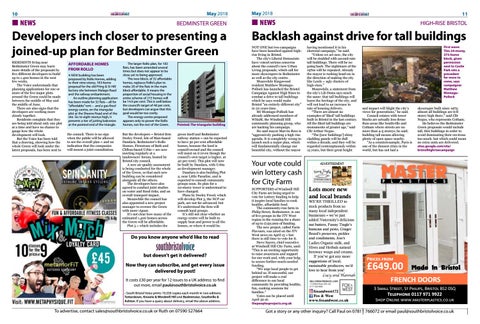 Developers inch closer to presenting a joined-up plan for Bedminster Green RESIDENTS living near Bedminster Green may learn more details of the proposals by five different developers to build up to 1,400 homes in the next few weeks. The Voice understands that planning applications for one or more of the five major plots around the Green could be made between the middle of May and the middle of June. There are also signs that the developers are working more closely together. Residents complain that they are being told about only one plot at a time and have no chance to gauge how the whole development will look. But the Voice has been told that a drawing, showing how the whole Green will look under the latest proposals, has been sent to

AFFORDABLE HOMES FROM ROLLO A NEW building has been proposed by Rollo Homes, adding to their nine-storey, 183-home proposal for the old Pring & St Hill factory site between Malago Road and the railway embankment. An outline planning application has been made for 32 flats – all for “affordable” rent – and a gas-fired energy centre, on the triangular plot at the Sheene Road end of the site. Six to eight storeys high, it presents a tier of jutting balconies at the pointed end of the triangle. the council. There is no sign when the public will be allowed to see the overall plan – and no indication that the companies will mount a joint consultation.

The larger Rollo plan, for 183 flats, has been amended several times but does not appear to be close yet to being approved. The new block, of 32 affordable homes, replaces Rollo’s plan to make 20 of the flats in the main block affordable. It means the proportion of social housing in the entire scheme of 215 homes will be 14.9 per cent. This is well below the council’s target of 40 per cent, but developers can argue that this goal would be too costly. The energy centre proposed appears only to power the Rollo homes, not the rest of the Green.

But the developers – Bristol firm Deeley Freed, Isle of Man-based Dandara, Bedminster’s Rollo Homes, Firmstone of Bath and Clifton-based Urbis – are now meeting regularly at a landowners’ forum, hosted by Bristol city council. A new air quality assessment is being conducted for the whole of the Green, so that each new building can be considered alongside all the others. The developers have also agreed to conduct joint studies on water and flood risks, and on overall transport impact. Meanwhile the council has also appointed a new project manager to oversee the Green with more vigour. It’s not clear how many of the estimated 1,400 homes across the Green will be affordable. Plot 5 – which includes the

green itself and Bedminster railway station – can be expected to have 30 per cent affordable homes, because the land is council-owned and the council will insist on it (even though the council’s own target is higher, at 40 per cent). This plot will now be built by Dandara, with Urbis as development manager. Dandara is also building Plot 4, near Little Paradise, and is expected to consult community groups soon. Its plan for a 22-storey tower is understood to have changed. Plans by Deeley Freed, which will develop Plot 3, the NCP car park, are not far advanced, but it’s understood the firm will consult local groups. It’s still not clear whether an energy centre will be built to supply heat and power to all the homes, or where it would be.

Do you know anyone who’d like to read but doesn’t get it delivered? Now they can subscribe, and get every issue delivered by post! It costs £30 per year for 12 issues to a UK address: to find out more, email paul@southbristolvoice.co.uk • South Bristol Voice prints 19,550 copies each month in two editions: Totterdown, Knowle & Windmill Hill and Bedminster, Southville & Ashton. If you have a query about delivery, email the above address.

Backlash against drive for tall buildings NOT ONE but two campaigns have been launched against highrise living in Bristol. The city’s Liberal Democrats have voiced serious concerns about the council’s new Urban Living proposals, which call for more skyscrapers in Bedminster as well as the city centre. Meanwhile Kingswood resident Matthew MontaguPollock has launched the Bristol Campaign Against High Rises to combat a drive to tall buildings which he says would make Bristol “an entirely different city” in 20 years time. Mr Montagu-Pollock has already addressed members of WHaM, the Windmill Hill community planning group, who are backing his campaign. He said mayor Marvin Rees is “aggressively pushing a high rise agenda. It is completely wrong to launch such a major plan, which will fundamentally change our beautiful city, without the mayor

Your vote could win lottery cash for City Farm SUPPORTERS of Windmill Hill City Farm are being urged to vote for Lottery funding to help it inspire local families to cook healthy, affordable food. The community-run farm in Philip Street, Bedminster, is one of five groups in the ITV West region in the running for a share of up to £150,000 of funding. The new project, called Farm Flavours, was aired on the ITV West news on April 15 – but there is still time to vote for it. Steve Sayers, chief executive at Windmill Hill City Farm, said: “This is an exciting opportunity to raise awareness and support for our work and, with your help, to secure further much-needed funding. “We urge local people to get behind us. If successful, our project will make a real difference to our local community by providing healthy, fun, cooking sessions for families.” Votes can be placed until April 30 at: thepeoplesprojects.org.uk

having mentioned it in his electoral campaign,” he said. “Unless we act now, the city will be studded with second-rate tall buildings. There will be no going back. The nightmare of the 1970s will be repeated. Already the mayor is rushing head-on in the direction of making the city like Leeds – ugly clusters of high-rises.” Meanwhile, a statement from the city’s Lib Dems says much the same: that tall buildings will harm the heritage of the city, and will not lead to an increase in rate of housing delivery. “There are almost no examples of ‘liked’ tall buildings built in Bristol in the last century. All the liked tall buildings are monuments of greater age,” said Cllr Arthur Negus. “The [new buildings’] shiny cladding panels will be dull within a decade, and they will be regarded contemptuously within 15 years, but their great height

FIrst wave: This 24-storey, 375-home block, given permission next to Castle Park sets a precedent for more to come, says campaigner Matthew MontaguPollock and impact will blight the city’s views for generations,” he said. Council estates with tower blocks are actually less dense than areas like Southville and Cotham where streets are no more than 4-5 storeys, he said; building tall means allowing plenty of open space nearby. “As a counterexample, Paris is one of the densest cities in the world, but has not had a

skyscraper built since 1973; almost all buildings are 6-8 storey high there,” said Cllr Negus, who represents Cotham. He believes the Bedminster Green proposals would include tall, thin buildings in order to avoid dominating their environs too much, but which could mean no extra units are delivered. sites.google.com/site/ bristolhighrisecampaign