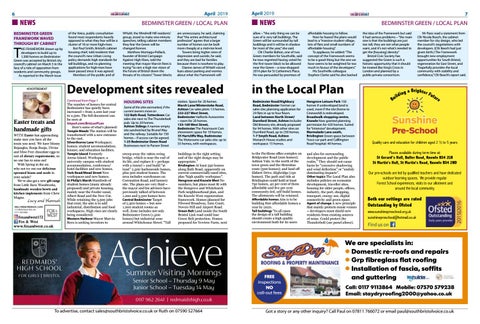 HE FRAMEWORK drawn up by developers to build up to 1,500 homes on Bedminster Green was accepted by Bristol city council’s cabinet on March 5 in the face of a tide of opposition from residents and community groups. As reported in the March issue

Easter treats and handmade gifts WITH Easter fast approaching make sure you have all the treats you need. We have Monty Bojangles, Booja Booja, Divine and Moo Free chocolate eggs to suit all dietary requirements, so no one has to miss out! With Spring in the air, why not try out our delicious sprouted beans and seeds in your salads? We’ve also got a new gift range from Little Barn Woodworks, handmade wooden bowls and kitchen implements from Chew Magna.

of the Voice, public consultation found most respondents heavily opposed to what they fear will be a cluster of 10 or more high-rises. But Paul Smith, Bristol’s cabinet housing chief, told residents that the council’s new Urban Living policy demands high standards for tall buildings, and no planning applications for high-rises have been passed since it was agreed. Members of the public and of

WHaM, the Windmill Hill residents’ group, stood to make one-minute speeches, telling cabinet members they fear the Green will be changed forever. Matthew Montagu-Pollack, founder of Bristol Campaign Against High Rises, told the meeting that mayor Marvin Rees is trying “to ram a high rise vision of the future of Bristol down the throats of its citizens”. Tower blocks

are unnecessary, he said, claiming that “the entire architectural profession” agrees that a larger number of homes can be built more cheaply at a mid-rise level. Towers bring higher rates of depression and suicide, he said, and they are bad for families because there is nowhere to play. Dianne James of WHaM voiced fears about parking and worries about what the Framework will

n NEWS allow – “the only thing we can be sure of is very tall buildings. The Green will be surrounded by tall buildings and it will be in shadow for most of the year,” she said. Cllr Charlie Bolton, one of two Green members for Southville, said he now regretted having voted for the first tower block to be allowed near the Green – a now-dropped 2014 plan for St Catherine’s Place. He was persuaded by promises of

in the Local Plan

Continued from Page 1 The number of homes for central Bedminster has quietly been increased – from 2,200 last year to 2,500. The full document can be seen at tinyurl.com/BrisLocPLan Here’s some of what’s planned: Temple Meads The station will be transformed with a new entrance to the east. Silverthorne Lane Workspace; homes; student accommodation; leisure; and education facilities. Temple Island Formerly Arena Island. Workspace, a university campus with student accommodation, conference/ hotel facilities and new homes. York Road/Mead Street New workspaces and new homes. St Philip’s Marsh Hundreds of student homes (many already proposed) and private housing, mainly near the Feeder canal, Albert Road and the New Cut. While retaining the 3,500 jobs that exist, the aim is to add industrial, distribution and food workspaces. High rises are clearly being considered. Western Harbour Mayor Marvin Rees is seeking investors to

buildings in the right setting and of the right design may be appropriate.” Brislington At least 350 homes along Bath Road, apparently on current commercially-used sites, plus “high quality workspace”. Hengrove and Knowle West No numbers, but plans must fit with the Hengrove and Whitchurch Park neighbourhood plan, and the Knowle West regeneration framework. Homes planned for Filwood Broadway, Inns Court, Novers Hill and Airport Road. Green Belt Land inside the South Bristol Link road could lose Green Belt protection. Homes proposed for Yewtree Farm, next

to the Pavilions office complex on Bridgwater Road (200 homes); Ashton Vale, to the north of the town green and the Metrobus route (500 homes); and land off Elsbert Drive, Highridge (150 homes). The park and ride at Brislington could hold at least 750 homes, 40 per cent of them affordable and five per cent community-led, self build homes. The allotments will be retained. Affordable homes Aim is to be building 800 affordable homes a year by 2020. Tall buildings “In all cases the design of a tall building should create a high quality environment both for its users

HOUSING SITES Some of the sites earmarked, if the current owners move on 122 Bath Road, Totterdown Car sales site next to The Thunderbolt pub. Up to 20 homes. Ashton Sidings A narrow empty site sandwiched by Brunel Way and the railway. Suitable for 150 homes – if access can be agreed. 1-25 Bedminster Down Road Businesses next to Parson Street sweep away the 1960s swing bridge, which is near the end of its life, and replace it – perhaps with a tunnel – and build “at least” 2,500 harbourside homes, plus 500 student homes. The area includes warehouses on Coronation Road, and tannery site. The plans are very fluid – the mayor and his advisers have previously talked of between 1,200 and 3,500 homes here. Central Bedminster Target of 2,500 homes – but now 1,000 student rooms as well. Zone includes not only Bedminster Green (1,500 homes) but industrial zone around Whitehouse Street. “Tall

affordable housing to follow. Now he feared the plans would lead to a “massive student village, lots of flats and small numbers of affordable housing”. To applause, he added: “The concept of the Framework seems to be a good thing but the one we have seems to be weighted far too much in favour of the developers.” His Southville colleague Stephen Clarke said he also backed

the idea of the Framework but said it had serious problems – “the main one is that the buildings are just too tall, they are not what people want, and it’s not what’s needed to get the [housing] density.” Bristol Civic Society has suggested the Green is such a historic opportunity that it should be treated like King’s Cross in London and planned by a public-private consortium.