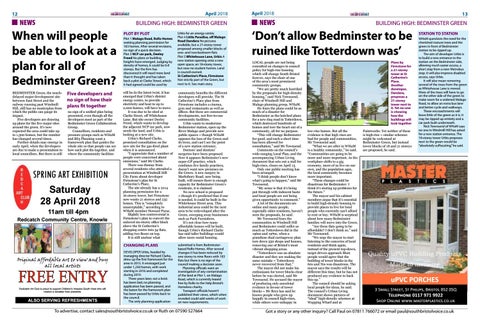 When will people be able to look at a plan for all of Bedminster Green? BEDMINSTER Green, the muchdelayed major development site between East Street and the railway running past Windmill Hill, still has no masterplan from which the public can gauge its impact. Five developers are drawing up plans for the five major sites around the green. It’s now expected the area could take up to 1,500 homes, but the number has changed several times. Further details may emerge in early April, when the developers are due to make a presentation to local councillors. But there is still

Five developers and no sign of how their plans fit together no sign of a unified plan being presented, even though all the developers meet as part of the Bedminster Green Collaboration Group. Councillors, residents and pressure groups such as WHaM and BS3 Planning want a framework plan that guides the whole site so that people can see how each plot fits together, and where the community facilities

Original affordable art to view and buy all local artists

PLOT BY PLOT Plot 1 Malago Road, Rollo Homes seeking planning permission for 183 homes. After several revisions, no sign of a quick decision. Plot 3 NCP car park, Deeley Freed No plans or building heights have emerged. Judging by density of homes, it could be 6-8 storeys. But the firm has discovered it will need more land than it thought and has taken back a plot at Clarke Street, which it had agreed could be used by

Urbis for an energy centre. Plot 4 Little Paradise, off Malago Road Dandara No pictures available, but a 21-storey tower proposed among smaller blocks of one- and two-bedroom flats Plot 5 Whitehouse Lane, Urbis A new station opening onto a new open space, an 18-storey tower, but now no student homes. Land is council-owned. St Catherine’s Place, Firmstone Not strictly part of the Green, but next to it. See main story.

will be.In the latest twist, it has emerged that Urbis’s district energy centre, to provide electricity and heat to up to 2,000 homes, will have to move. It was due to be sited at Clarke Street, off Whitehouse Lane. But site owner Deeley Freed, which wants to develop the adjacent NCP car park, now needs the land, and Urbis is looking at a new site. Urbis’s Richard Clarke, promised consultation on the new site for the gas-fired plant when it is announced. “I appreciate that a number of people were concerned about emissions,” said Mr Clarke. There was dismay from several residents who attended a presentation at Windmill Hill City Farm about developer Firmstone’s plan for St Catherine’s Place. The site already has a 2014 planning permission for a 16-storey tower, but Firmstone now wants 21 storeys and 232 homes. This is “completely unacceptable,” according to WHaM member Howard Purse. Slightly less controversial is Firmstone’s plan to convert the unloved six-storey office block above the St Catherine’s shopping centre into 54 flats, adding two floors on top. It is still unclear what

community benefits the different developers will provide. The St Catherine’s Place plan from Firmstone includes a cinema, gym and restaurants as well as offices. But these are commercial developments, not free-to-use community facilities. Urbis wants to modernise Bedminster station, open up the River Malago and provide new public spaces – though WHaM opposes the loss of the Green and its trees, and can’t see the point of a new station entrance. Doctors’ and dentists’ surgeries have been proposed. Now it appears Bedminster’s new super-GP practice, which combines five family practices, doesn’t want new premises on the Green. A new surgery in Marksbury Road, now being built, will ensure there is enough capacity for Bedminster Green’s residents, it is claimed. No new school is proposed – though it’s predicted that if one is needed, it could be built in the Whitehouse Street area. This industrial area could be the next area to be redeveloped after the Green, sweeping away businesses such as Park Furnishers. It’s not clear how many affordable homes will be built, though Urbis’s Richard Clarke has said taller buildings would allow more social housing.

submitted is from Bedminsterbased Rollo Homes. After several changes it has been reduced by one storey to nine floors with 183 flats but there is no sign of the council making a decision soon. Planning officials want an investigation of any contamination of the land at Plot 1, on Malago Road, which is currently leased free by Rollo to the Help Bristol’s Homeless charity. Transport officials haven’t published their views, which when revealed could add weeks of work on new requirements.

DEVELOPER Urbis, headed by managing director Richard Clarke, drew up the first framework for the area in 2015. It envisaged just under 1,250 homes, with work starting in 2016 and completed during 2019. Three years later, not a brick has been laid, no planning application has been passed, and the baton for the framework plan has been passed by Urbis back to the council. The only planning application

‘Don’t allow Bedminster to be ruined like Totterdown was’ LOCAL people are not being consulted on changes in council policy for high-rise housing which will change South Bristol forever, says the chair of one of the area’s most prominent community groups. “We are pretty much horrified by the proposals for high-density housing,” said Nick Townsend, chair of Windmill Hill and Malago planning group, WHaM. He fears the plans could be as much of a disaster for Bedminster as the botched plans for a new ring road in Totterdown, which destroyed hundreds of homes and tore the heart out of a community, all for no purpose. “This will change Bedminster for good, and such a short time has been allowed for consultation,” said Mr Townsend. Comments on the council’s wide-ranging Local Plan, and the accompanying Urban Living document that sets out a stall for high-rises, closes on April 13. Only one public meeting has been arranged. “I think people don’t know what’s going to happen,” said Mr Townsend. “My sense is that it’s being put through with indecent haste and local people are not being given opportunity to comment.” A lot of the documents are online and many people, especially older residents, haven’t seen the proposals, he said. Mr Townsend fears the communities in Windmill Hill and Bedminster could suffer as much as Totterdown did in the 1960s and 1970s, when a grandiose dual carriageway plan tore down 550 shops and houses, removing one of Bristol’s most vibrant shopping areas. “Totterdown was an absolute disaster and they are making the same mistake – Totterdown never recovered from that.” The mayor did not make his enthusiasm for tower blocks clear before he was elected, said Mr Townsend. He accused the mayor of producing only anecdotal evidence in favour of tower blocks – Mr Rees has said he knows people who grew up happily in council high-rises, while others were unhappy in

Plans by Firmstone for a 21-storey tower at St Catherine’s Place. Another developer, Dandara, proposes a 21-storey tower next to it. Yet no-one is showing how the buildings will look together low-rise homes. But all the evidence is that high rises are bad for people and communities, Mr Townsend said. “What we are after in WHaM is a healthy community,” he said. “Communities are going to be more and more important. As the workplace shifts to a gig economy, more of us live on our own, and the population ages, the local community becomes more important. “These changes could be disastrous for Bedminster. I think it’s storing up problems for the future.” The mayor and his cabinet members argue that it’s essential to build high-density housing to provide places to live for local people who currently can’t afford to rent or buy. WHaM is sceptical about how many Bedminster families will move into the Green. “Are these flats going to be affordable? I don’t think so,” said Mr Townsend. “We urge the mayor to start listening to the concerns of local residents and think again, instead of the present top-down, target driven approach Most people would agree that the building of tower blocks in the 60s and 70s was disastrous. The mayor says the results will be different this time, but he has not produced any evidence to back this up.” The council should be asking local people for ideas, he said. The council’s Urban Living document shows pictures of “ideal” high-density schemes at Wapping Wharf and at

Paintworks. Yet neither of these is high-rise – similar schemes might be welcomed at Bedminster Green, but instead tower blocks of 18 and 21 storeys are proposed, he said.

STATION TO STATION WHaM questions the need for the cherished mature trees and the green in front of Bedminster station to be ripped up. The aim of developer Urbis is to build a new entrance to the station on the Bedminster side, allowing much easier access, a short step from a new Metrobus stop. It will also improve disabled access, says Urbis. It will also mean removing several of the trees from the green as Whitehouse Lane is moved. More of the trees will have to go on the other side of the green to make room for a widened Malago Road, to allow an extra bus lane and better cycle and walkways. These encroachments will leave little of the green as it is. It may be ripped up entirely and a car park built underneath. Nick Townsend of WHaM says no one in Windmill Hill has asked for a new station entrance. The 18-storey tower Urbis proposes next to the green would be “absolutely suffocating,” he said.