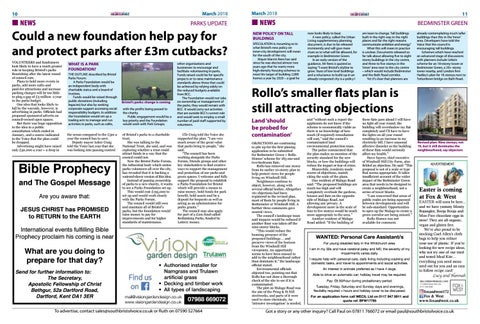 Could a new foundation help pay for and protect parks after £3m cutbacks? VOLUNTEERS and fundraisers look likely to have a much greater role in keeping Bristol’s parks flourishing after the latest round of council cuts. Plans to hold more events in parks, add more cafés and paid-for attractions and increase parking charges will be too little to plug a gap of £3 million a year in the parks budget. One idea that looks likely to fall by the wayside, however, is advertising in parks. Officials had proposed sponsored adverts on council-owned open spaces. But there was huge opposition to the idea in a public consultation which ended in January, and a source indicated to the Voice that the plan could be dropped. Advertising might have raised only £50,000 a year – a drop in

WHAT IS A PARK FOUNDATION? THE OUTLINE described by Bristol Parks Forum: A Parks Foundation would be an independent body with charitable status and a board of trustees. Funds would be raised through public donations (including legacies) but also by seeking corporate support accessing social responsibility budgets. In addition the Foundation would set up a trading arm to manage and run activities in parks, such as cafés, the ocean compared to the £3m a year the council has to save. Deputy mayor Asher Craig told the Voice last year that she was looking into passing control

Bible Prophecy and The Gospel Message Are you aware that: JESUS CHRIST has PROMISED to RETURN to the EARTH

with the profits being passed to the charity. Public engagement would be a key priority and the Foundation would work with Park Groups;

other organisations and businesses to encourage and facilitate volunteering in parks. Funds raised could be for specific projects or to raise maintenance standards above those that could be achieved by relying solely on the reduced budgets available from BCC. The Foundation would not take on ownership or management of the parks, they would remain with BCC. It would carry out activities that are outside BCC’s current role and would seek to employ a small number of paid staff supported by volunteers.

of Bristol’s parks to a charitable trust. She was talking to the National Trust, she said, and was exploring whether a trust could attract funds in a way that the council could not. Now the Bristol Parks Forum, the influential body which unites parks volunteers all over the city, has revealed that it is backing a watered-down version of this idea. Instead of passing ownership of parks to a new charity, it wants to see a Parks Foundation set up. This would cost £195,000 to set up and would work closely with the Parks Forum. The council would still own and maintain all of Bristol’s parks, but the foundation would raise money to pay for improvements and for higher standards of maintenance.

Cllr Craig told the Voice she supported the plan. “I am very much aware of the great value that parks bring to people,” she said. “The council has been working alongside the Parks Forum, friends groups and other key stakeholders to find creative ways to support the management and protection of our parks and green spaces. I welcome and fully support the proposal to establish a Parks Foundation for Bristol which will provide a means to raise money, hold funds for park benefit, hold assets and be a deposit for bequests as well as acting as an administrator for parks grants.” The council may also apply for part of a £2m fund called Rethinking Parks, funded by Lottery money.

International events fulfilling Bible Prophecy proclaim his coming is near

What are you doing to prepare for that day? Send for further information to: The Secretary, Apostolic Fellowship of Christ Bethgur, 52a Dartford Road, Dartford, Kent DA1 3ER

n NEWS NEW POLICY ON TALL BUILDINGS SPECULATION is mounting as to what Bristol’s new policy on inner-city development will mean for the south of the city. Mayor Marvin Rees has said since he was elected almost two years ago that he wants more high-density housing schemes to meet his target of building 2,000 homes a year by 2020 – a goal he

now looks likely to beat. A new policy, called the Urban Living supplementary planning document, is due to be released imminently and will give more clues as to what will be allowed, for example in Bedminster Green. In an early version of the guidance, Mr Rees is quoted as saying: “I want Bristol’s skyline to grow. Years of low level buildings and a reluctance to build up in an already congested city is a policy I

am keen to change. Tall buildings built in the right way in the right places and for the right reasons communicate ambition and energy.” What this will mean in practice is unclear. Documents released so far talk about allowing five to eight storey buildings in the city centre, and three to five storeys in the ‘inner’ area next to the city centre – which would include Bedminster and the Bath Road corridor. Yet it’s clear that planners are

BEDMINSTER GREEN already contemplating much taller buildings than this in the ‘inner’ area. Developers have told the Voice that the council is encouraging tall buildings. Schemes which have reached an advanced stage of discussions with planners include Urbis’s scheme for an 18-storey tower at Bedminster Green, a 20+ storey tower nearby, and London firm Hadley’s plan for 18 storeys next to Totterdown bridge on Bath Road.

Rollo’s smaller flats plan is still attracting objections Land ‘should be probed for contamination’ OBJECTIONS are continuing to pile up for the first planing application to be submitted for Bedminster Green – Rollo Homes’ scheme for 183 one-and two-bedroom flats. Rollo has removed one storey from its earlier 10-storey plan to help protect views for people living on Windmill Hill. Neighbours continue to object, however, along with several official bodies. Altogether 161 objections had been registered to the revised plan, most of them by people living in Bedminster or Windmill Hill. A further three comments gave neutral views. The council’s landscape team said impacts would be reduced if another floor was taken off the nine-storey blocks. “This would reduce the looming presence of the proposed buildings … and preserve views of the horizon from the Windmill Hill viewpoints. An opportunity seems to have been missed to add to the neighbourhood rather than dominate it,” the landscape official stated. Environmental officials objected too, pointing out that Rollo has not done a thorough check of the site to see if it is contaminated. The plot on Malago Road was the site of the Pring & St Hill steelworks, and parts of it were used to store chemicals. An ‘intrusive investigation’ is needed,

and “without such a report the applicants do not know if the scheme is economically viable as there is no knowledge of how much (if required) remediation will cost,” said the council’s contaminated land environmental protection team. The police commented that the plan makes no mention of the security standard for the new blocks, or how the buildings will reduce the impact or fear of crime. Meanwhile, residents made scores of objections, mainly citing the scale of the plans. One resident of Malago Road said: “The proposed buildings are much too high and will completely overlook the gardens, houses and flats on the opposite side of Malago Road, not allowing any privacy. A development more in the scale of four to five storeys would be much more appropriate to the area.” Another resident of Malago Road added: “If the building of

these flats goes ahead I will have no light all year round, the building will overshadow my flat completely and I’ll have to have the lights on all year round resulting in an increase in my electricity bill. I have seasonal affective disorder so the building of these flats would seriously affect my health.” Steve Sayers, chief executive of Windmill Hill City Farm, also fielded an objection. He said: “This proposal is not of a scale or type that seems appropriate. It takes insufficient account of the wider impact of the Bedminster Green area that needs to be designed to create a neighbourhood, not a series of tower blocks. “I am concerned that areas of public realm are being squeezed between developments and will be sub-standard. Opportunities to open up the Malago to create a green corridor are being missed.” Rollo Homes was not available for comment.

I am in my 30s and have cerebral palsy and ME; the severity of my impairments varies daily. I require help with personal care, daily living including cooking and domestic tasks, and travel to appointments and social activities. An interest in animals preferred as I have 4 dogs. Able to drive an automatic car; holiday travel may be required. Pay: £9.50/hour during probationary period. Tuesday, Friday, Saturday and Sunday days and evenings, flexibility required – hours and holiday cover to be discussed. For an application form call WECIL Ltd on 0117 947 9911 and quote ref. BFW17785

Revised plan: Nine storeys, not 10, but it still dominates the neighbourhood, say objectors

Easter is coming at Fox & West

EASTER will soon be here... and we have yummy Monty Bojangles, Booja Booja and Moo Free chocolate eggs in store! They are all organic, vegan and gluten free. We’re also proud to be stocking Gael Allen’s cloth bags to help you reduce your use of plastic. If you’re looking for new recipe ideas, why not try one of our tried and tested Meal Kits ... everything you need measured out for you and an easy to follow recipe card!