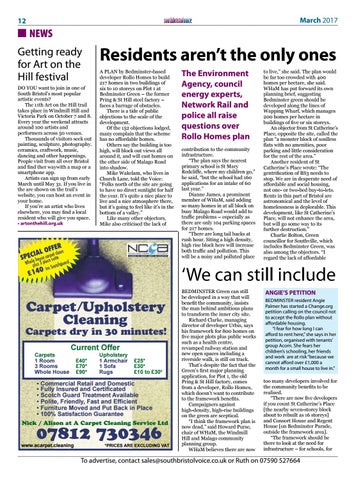 n NEWS Getting ready for Art on the Hill festival DO YOU want to join in one of South Bristol’s most popular artistic events? The 11th Art on the Hill trail takes place in Windmill Hill and Victoria Park on October 7 and 8. Every year the weekend attracts around 100 artists and performers across 50 venues. Thousands of visitors seek out painting, sculpture, photography. ceramics, craftwork, music, dancing and other happenings. People visit from all over Bristol and find ther waywith a map or a smartphone app. Artists can sign up from early March until May 31. If you live in the are shown on the trail’s website, you can host an event in your home. If you’re an artist who lives elsewhere, you may find a local resident who will give you space. • artonthehill.org.uk

Residents aren’t the only ones A PLAN by Bedminster-based developer Rollo Homes to build 217 homes in two buildings of six to 10 storeys on Plot 1 at Bedminster Green – the former Pring & St Hill steel factory – faces a barrage of obstacles. There is a tide of public objections to the scale of the development. Of the 152 objections lodged, many complain that the scheme has no affordable homes. Others say the building is too high, will block out views all around it, and will cast homes on the other side of Malago Road into shadow. Mike Wakelam, who lives in Church Lane, told the Voice: “Folks north of the site are going to have no direct sunlight for half the year. It’s quite a nice place to live and a nice atmosphere there, but it’s going to feel like it’s in the bottom of a valley.” Like many other objectors, Mike also criticised the lack of

contribution to the community infrastructure. “The plan says the nearest primary school is St Mary Redcliffe, where my children go,” he said, “but the school had 160 applications for an intake of 60 last year.” Dianne James, a prominent member of WHaM, said adding so many homes in at all block on busy Malago Road would add to traffic problems – especially as there are only 104 parking spaces for 217 homes. “There are long tail backs at rush hour. Siting a high density, high rise block here will increase both traffic and pollution. This will be a noisy and polluted place

to live,” she said. The plan would be far too crowded with 400 homes per hectare, she said. WHaM has put forward its own planning brief, suggesting Bedminster green should be developed along the lines of Wapping Wharf, which manages 200 homes per hectare in buildings of five or six storeys. An objector from St Catherine’s Place, opposite the site, called the plan “a monster block of soulless flats with no amenities, poor parking and little consideration for the rest of the area.” Another resident of St Catherine’s Place wrote: “The gentrification of BS3 needs to stop. We are in desperate need of affordable and social housing, not one- or two-bed buy-to-lets. Rents in this part of Bristol are astronomical and the level of homelessness is deplorable. This development, like St Catherine’s Place, will not enhance the area, but will go some way to its further destruction.” Charlie Bolton, Green councillor for Southville, which includes Bedminster Green, was also among the objectors. “I regard the lack of affordable

‘We can still include

BEDMINSTER Green can still be developed in a way that will benefit the community, insists the man behind ambitious plans to transform the inner city site. Richard Clarke, managing director of developer Urbis, says his framework for 800 homes on five major plots plus public works such as a health centre, revamped railway station and new open spaces including a riverside walk, is still on track. That’s despite the fact that the Green’s first major planning application, for Plot 1, the old Pring & St Hill factory, comes from a developer, Rollo Homes, which doesn’t want to contribute to the framework benefits. Campaigners against high-density, high-rise buildings on the green are sceptical. “I think the framework plan is now dead,” said Howard Purse, chair of WHaM, the Windmill Hill and Malago community planning group. WHaM believes there are now

ANGIE’S PETITION BEDMINSTER resident Angie Palmer has started a Change.org petition calling on the council not to accept the Rollo plan without affordable housing. “I fear for how long I can afford to rent here,” she says in her petition, organised with tenants’ group Acorn. She fears her children’s schooling, her friends and work are at risk “because we cannot afford over £1,000 a month for a small house to live in.” too many developers involved for the community benefits to be realised. “There are now five developers if you count St Catherine’s Place [the nearby seven-storey block about to rebuilt as 16 storeys] and Consort House and Regent House [on Bedminster Parade, outside the framework area]. “The framework should be there to look at the need for infrastructure – for schools, for