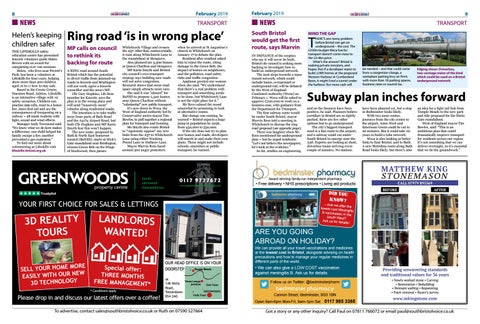 n NEWS Helen’s keeping children safer THE LIFESKILLS safety education centre has presented Knowle volunteer guide Helen Brown with an award for completing over 100 sessions. Helen, who lives near Perrett’s Park, has been a volunteer at Lifeskills for four years, helping show more than 400 children aged 10 to 11 how to stay safe. Based in the Create Centre, Smeaton Road, Ashton, Lifeskills is an interactive village with 19 safety scenarios. Children can  practise 999 calls, react to a house fire, learn first aid and see the consequences of trespassing on a railway – all made realistic with light, sound and wind effects. Manager Andy Townsend said: “We know what we do here makes a difference; one child helped his family escape a fire, another prevented a gas explosion.” To find out more about volunteering at Lifeskills visit lifeskills-bristol.org.uk

Ring road ‘is in wrong place’ MP calls on council to rethink its backing for route A RING road around South Bristol which has the potential to divert traffic from jammed-up roads in Knowle and Brislington will not work, agree a Knowle councillor and the area’s MP. Cllr Gary Hopkins, Lib Dem member for Knowle, says the plan is in the wrong place and will send “massively more” vehicles along residential roads. The intention is to take traffic away from parts of Bath Road and the A4174 Airport Road, but both Cllr Hopkins and MP Karin Smyth fear this won’t happen. The new route, proposed by Bath & North East Somerset council (BaNES), starts at Hick’s Gate roundabout near Brislington, crosses Green Belt on the fringe of Stockwood, then passes

Whitchurch Village and crosses the A37. After that, controversially, it runs along Whitchurch Lane to the roundabout at Hengrove. Also planned are 3,500 homes at Queen Charlton and Hengrove. MP Karin Smyth said Bristol city council’s own transport strategy says building new roads will not solve congestion. Research shows that more road space simply attracts more cars. She said it was “absurd” for BaNES to propose 2,500 homes near Queen Charlton without “substantial” new public transport. It’s now down to Weca, the West of England authority led by Conservative metro mayor Tim Bowles, to pull together a regional plan for transport and housing. Ms Smyth also wants Bristol to “vigorously oppose” any new links from the A37 to Whitchurch Lane using either Washing Pound Lane or Halfacre Lane. Mayor Marvin Rees faced around 300 angry protesters

when he arrived at St Augustine’s church in Whitchurch on January 17 to debate the plan. Resident after resident asked him to reject the route, citing damage to the Green Belt, the impact of homes on neighbours, and the pollution, road safety risks and traffic congestion. Applause greeted one woman when she said: “We understand that there’s a real problem with transport and something needs to be done, but Whitchurch Lane is not the right place for it.” Mr Rees calmed the mood somewhat by promising to look at alternative routes. But change was coming, he warned – Bristol expects a huge jump in population by 2036, from 450,000 to 550,000. If the city does not try to plan new homes and roads, developers will march in and make their own plans. These might not include schools, amenities or public transport, he warned.

South Bristol would get the first route, says Marvin IN DEFIANCE of the sceptics who say it will never be built, Bristol city council is seeking more backing to investigate how to build an underground network. The next steps towards a mass transit network, which could include buses, overground or underground rail, will be debated by the West of England Combined Authority (Weca) on February 1. Weca will be asked to approve £200,000 to work on a business case, with guidance from the Department for Transport. The first subway route would be under South Bristol, mayor Marvin Rees told a meeting in Whitchurch to discuss the ring road proposal (see opposite page). There was laughter when Mr Rees mentioned his underground plan – but he urged residents: “Let’s not believe the newspapers, let’s look at the evidence.” So far, studies on engineering

HERE’S one teeny problem before Bristol can get an underground – the cost. The £350m budget Weca has for transport doesn’t come close to the £3-4bn price. What’s the answer? Bristol is seeking private investors, and hopes that if a developer wants to build 2,000 homes at the proposed Western Harbour in Cumberland Basin, it might fund a tunnel under the harbour. But more cash will

and on the finances have been positive, he said. Planners believe corridors in Bristol are so tightly packed, there are few other options but to go underground. The city’s biggest transport need is a fast route to the airport, and a subway could cut under South Bristol to emerge near the A38. Experts are looking at short, driverless trains arriving every couple of minutes. No stations

MORE SELL YOUR HOME NEW EASILY WITH OUR 3D TECHNOLOGY

Please drop in and discuss our latest offers over a coffee!

Edging closer: Driverless, two-carriage trains of the kind which could be used on a Bristol underground network

have been planned yet, but a stop in Bedminster looks likely. With two more routes, journeys from the city centre to the airport, Aztec West and Emersons Green could be cut to 20 minutes. But it could take 20 years to build a tube network. Weca is also looking at better links to East Bristol, and to Bath. A new Metrobus route along Bath Road looks likely, but there’s also

an idea for a light rail link from Temple Meads to the new park and ride proposed for the Hicks Gate roundabout. West of England mayor Tim Bowles, said: “This is an ambitious plan that could dramatically improve transport for residents across our region. It’s not something that we can deliver overnight, so it’s essential that we do the groundwork.”

– that we offe r the lowest cost M eningitis B vaccination in the South West? Ask us for de tails!

be needed – and that could come from a congestion charge, a workplace parking levy on firms with more than 10 parking spaces, business rates or council tax.

ARE YOU GOING ABROAD ON HOLIDAY? OUR HEAD OFFICE IS ON YOUR Temple Meads DOORSTEP at 148 Wells Road, Totterdown BS4 2AG

We can provide all your travel vaccinations and medicines at the lowest cost in Bristol, alongside advising on health precautions and how to manage your regular medicines in different parts of the world.

• We can also give a LOW COST vaccination against meningitis B. Ask us for details. Follow us on Twitter: @bedminsterpharm