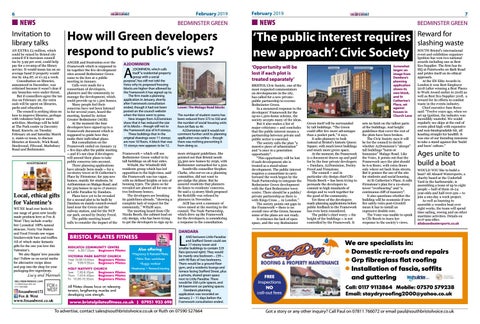 n NEWS Invitation to library talks AN EXTRA £2 million, which could be raised by Bristol city council if it increases council tax by 3.99 per cent, could help pay for a revamp of the library service. It would mean tax on an average band D property would rise by £64.87, or £1.25 a week. Consultation on libraries, announced in December, was criticised because it wasn’t clear if any branches were under threat. But if councillors agree the tax rise on February 26, the extra cash will be spent on libraries, parks and education. The council is seeking ideas on how to improve libraries, perhaps with volunteer help or more activities. Meetings will be held at The Park centre in Daventry Road, Knowle, on Tuesday February 26 and Saturday March 2, 10am-12 noon, to discuss libraries at Knowle, Wick Road, Stockwood, Filwood, Marksbury Road and Bedminster.

Local, ethical gifts for Valentine’s WE’RE head over heels for our range of great new locally made products here at Fox & West! They include crueltyfree Lyonsleaf 100% natural skincare, Norty Nut Butters and Food Friends raw vegan Snickers-style bars and truffles. All of which make fantastic gifts for the one you love this Valentine’s. We also flippin’ love pancake day! Follow us on social media for alternative recipe ideas and pop into the shop for your packaging-free ingredients.

How will Green developers respond to public’s views? ANGER and frustration over the Framework which is supposed to tie together the five development sites around Bedminster Green came to the fore at a public meeting in January. Calls were made for a consortium of developers, planners and the community to manage the development, which could provide up to 1,500 homes. Many people feel their concerns have not been listened to for several years, heard the meeting, hosted by Action Greater Bedminster (AGB). At the moment the four developers have signed up to a Framework document which is supposed to guide how they make their individual plans. But consultation on the Framework ended on January 13 – five days after the public meeting – and it’s not clear if developers will amend their plans to take public concerns into account. Three planning applications have already been made – for a 22-storey tower at St Catherine’s Place by Firmstone; for 599 new homes, mainly for students, by A2Dominion on Malago Road; and for 329 homes in up to 17 storeys at Little Paradise by Dandara. Plans have yet to be revealed for a second plot to be built by Dandara on mainly council-owned land near the Green and the railway station, and for the NCP car park, owned by Deeley Freed. The public meeting heard calls to consider the impact of the

Framework – which will see Bedminster Green walled in by tall buildings on all four sides. WHaM, the Windmill Hill residents group which has led opposition to the high-rises, said the Framework was too vague, with no defined heights or mix of housing types. The plans so far revealed are almost all for one or two bedroom homes. The developers are breaking its guidelines already, “showing a complete lack of respect for the community,” WHaM says. The meeting heard from Cllr Nicola Beech, the cabinet lead on city design, who has been trying to get the developers to sign up to

Lower: The Malago Road blocks The number of student rooms has been reduced from 573 to 550 and the number of social housing units from 64 flats to 49. A2Dominion said it would not comment further until its planning application was online – though there was nothing preventing it from doing so. more stringent guidelines. She pointed out that Bristol needs 33,500 new homes by 2036, with Bedminster earmarked for 2,500. Southville councillor Stephen Clarke, who serves on a planning committee, did not want to pre-judge the plans. But he assured residents that planners do listen to residents’ concerns. He said a 12-storey block proposed for Redcliffe was refused by planners in November. AGB has sent a summary of views raised at the meeting to the council. The Nash Partnership, which drew up the Framework for the developers, is considering a response to the consultation.

BRISTOL Civic Society, one of the most respected commentators on developments in the city, has called for a new privatepublic partnership to oversee Bedminster Green. In a measured response to the developers’ Framework for the up-to-1,500-home scheme, the society accepts many of the ideas. But it also makes a list of major criticisms – and concludes that the public interest means a partnership between private and public sector is essential. The society calls the plan “a massive piece of urbanisation” and “a once in a generation opportunity”. “This opportunity will be lost if each development site is treated as a stand-alone development. The public interest requires a consortium to carry forward the work begun by the Nash Partnership to integrate the Bedminster Green development with the East Bedminster town centre. There should be a public/ private partnership as there is with Kings Cross ... in London.” The society points out gaps in the Framework – there is no overall view of the Green, because some of the plans are not ready. It criticises the lack of open space, and the way Bedminster

Somewhat larger: an image from Dandara’s planning application shows its own block, and St Catherine’s Place, set against houses in Church Lane Green itself will be surrounded by tall buildings. “The Green could offer few more advantages than a pocket park,” it says. It asks planners to look instead at Bristol’s historic Queen Square, with much lower buildings and much more green space. At the moment, the Framework is a document drawn up and paid for by the four private developers – Dandara, A2Dominion, Deeley Freed and Firmstone. The council – and in particular city design chief Cllr Nicola Beech – has been trying to persuade the developers to commit to high standards of design and to work together for the good of the community. Yet three of the developers made planning applications before public feedback to the Framework has even been considered. The public’s chief worry – the height of the buildings – is not controlled by the Framework. It

sets no limit on the tallest parts of the buildings. And height guidelines that cover the rest of the plots have been broken. The Civic Society says it will be for the council to decide whether A2Dominion’s “abrupt” tall buildings “harm or humanise” Malago Road. Like the Voice, it points out that the Framework says the plot should be 6-9 floors, with extra floors only where set back from streets. But it praises the use of the site for students and social housing. At St Catherine’s Place, it calls Firmstone’s plan for a 22-storey tower “overbearing” and “a continuous cliff of masonry”. It also questions whether the building will be economic if new fire safety rules post-Grenfell mean it has to install an expensive double core. The Voice was unable to speak to Cllr Beech to learn her response to the society’s views.

SOUTH Bristol’s international event and exhibition organiser Ignition has won two national awards including one as Best Eco Supplier. The firm has its HQ at Paintworks on Bath Road and prides itself on its ethical approach. At the EN Elite Awards in London it won Best Employer 2018 (after winning a Best Places to Work Award earlier in 2018) as well as Best Eco Supplier 2018, a reward for its efforts to combat waste in the events industry. Chief executive Sam Rowe said: “Twelve years ago, when we set up Ignition, the industry was incredibly wasteful. We would regularly see skips at the end of events piled high with expensive and non-biodegradable kit, all heading straight for landfill. It was one of our founding missions to take a stand against this ‘build and burn’ culture.”

Ages unite to build a boat WOULD YOU like to build a boat? All Aboard Watersports, a charity based at the Underfall Yard in the harbourside, is assembling a team of up to eight people – half of them 16-24 year-olds and half over-50s – to join a one-day a week project. As well as learning to assemble a wooden boat over eight weeks, the team will spend time sailing, rowing and on other maritime activities. Details on 0117 929 0801. allaboardwatersports.co.uk

‘Opportunity will be lost if each plot is treated separately’

2DOMINION, which calls itself “a residential property group with a social purpose”, has still not told the Voice why its proposed housing blocks are higher than allowed by the Framework it has signed up to. The firm made a planning application in January, shortly after Framework consultation ended, though it had not been posted on the council website when the Voice went to press. New images from A2Dominion show that it has reduced the size of its blocks – though still not to the Framework size of 6-9 storeys. Three buildings that in the original drawings were 11 storeys are now 10 floors. A block that was 15 storeys now appears to be 12.

AND between Little Paradise and Stafford Street could see a 17-storey tower and smaller buildings to contain 329 flats (pictured right). They would be mainly one bedroom – 239 – with 90 flats of two bedrooms. There would be a ground floor gym, and a residents lounge and terrace facing Stafford Street, plus a private, shared green space next to Little Paradise. There would be 358 cycle spaces, and 84 basement car parking spaces. Dandara’s planning application was recorded on January 2 – 11 days before the Framework consultation ended.