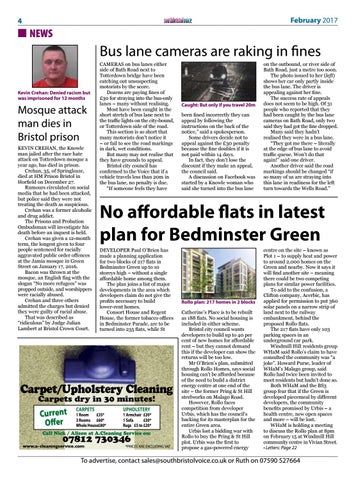 Bus lane cameras are raking in fines Kevin Crehan: Denied racism but was imprisoned for 12 months

Mosque attack man dies in Bristol prison KEVIN CREHAN, the Knowle man jailed after the race hate attack on Totterdown mosque a year ago, has died in prison. Crehan, 35, of Springleaze, died at HM Prison Bristol in Horfield on December 27. Rumours circulated on social media that he had been attacked, but police said they were not treating the death as suspicious. Crehan was a former alcoholic and drug addict. The Prisons and Probation Ombudsman will investigate his death before an inquest is held. Crehan was given a 12-month term, the longest given to four people sentenced for racially aggravated public order offences at the Jamia mosque in Green Street on January 17, 2016. Bacon was thrown at the mosque, an English flag with the slogan “No more refugees” was propped outside, and worshippers were racially abused. Crehan and three others admitted the charges but denied they were guilty of racial abuse. That was described as “ridiculous” by Judge Julian Lambert at Bristol Crown Court.

CAMERAS on bus lanes either side of Bath Road next to Totterdown bridge have been catching out unsuspecting motorists by the score. Dozens are paying fines of £30 for straying into the bus-only lanes – many without realising. Most have been caught in the short stretch of bus lane next to the traffic lights on the city-bound, or Totterdown side of the road. This section is so short that many motorists don’t notice it – or fail to see the road markings in dark, wet conditions. But many may not realise that they have grounds to appeal. Bristol city council has confirmed to the Voice that if a vehicle travels less than 20m in the bus lane, no penalty is due. “If someone feels they have

DEVELOPER Paul O’Brien has made a planning application for two blocks of 217 flats in Bedminster Green up to 10 storeys high – without a single affordable home among them. The plan joins a list of major developments in the area which developers claim do not give the profits necessary to build lower-rent homes. Consort House and Regent House, the former tobacco offices in Bedminster Parade, are to be turned into 235 flats, while St

been fined incorrectly they can appeal by following the instructions on the back of the notice,” said a spokesperson. Some drivers decide not to appeal against the £30 penalty because the fine doubles if it is not paid within 14 days. In fact, they don’t lose the discount if they make an appeal, the council said. A discussion on Facebook was started by a Knowle woman who said she turned into the bus lane

No affordable flats in latest plan for Bedminster Green

Caught: But only if you travel 20m

on the outbound, or river side of Bath Road, just a metre too soon. The photo issued to her (left) shows her car only partly inside the bus lane. The driver is appealing against her fine. The success rate of appeals does not seem to be high. Of 31 people who reported that they had been caught by the bus lane cameras on Bath Road, only two said they had got the fine dropped. Many said they hadn’t realised they were in a bus lane. “They got me there – literally at the edge of bus lane to avoid traffic queue. Won’t do that again!” said one driver. Another driver said the road markings should be changed “if so many of us are straying into this lane in readiness for the left turn towards the Wells Road.”

Rollo plan: 217 homes in 2 blocks Catherine’s Place is to be rebuilt as 188 flats. No social housing is included in either scheme. Bristol city council wants developers to build up to 40 per cent of new homes for affordable rent – but they cannot demand this if the developer can show the returns will be too low. Mr O’Brien’s plan, submitted through Rollo Homes, says social housing can’t be afforded because of the need to build a district energy centre at one end of the site – the former Pring & St Hill steelworks on Malago Road. However, Rollo faces competition from developer Urbis, which has the council’s backing for its masterplan for the entire Green area. Urbis lost a bidding war with Rollo to buy the Pring & St Hill plot. Urbis was the first to propose a gas-powered energy

centre on the site – known as Plot 1 – to supply heat and power to around 2,000 homes on the Green and nearby. Now it says it will find another site – meaning there could be two competing plans for similar power facilities. To add to the confusion, a Clifton company, Acerbic, has applied for permission to put 360 solar panels on a narrow strip of land next to the railway embankment, behind the proposed Rollo flats. The 217 flats have only 103 parking spaces in an underground car park. Windmill Hill residents group WHaM said Rollo’s claim to have consulted the community was “a joke”. Howard Purse, leader of WHaM’s Malago group, said Rollo had twice been invited to meet residents but hadn’t done so. Both WHaM and the BS3 group fear that if the Green is developed piecemeal by different developers, the community benefits promised by Urbis – a health centre, new open spaces and more – will be lost. WHaM is holding a meeting to discuss the Rollo plan at 8pm on February 15 at Windmill Hill community centre in Vivian Street. • Letters: Page 22