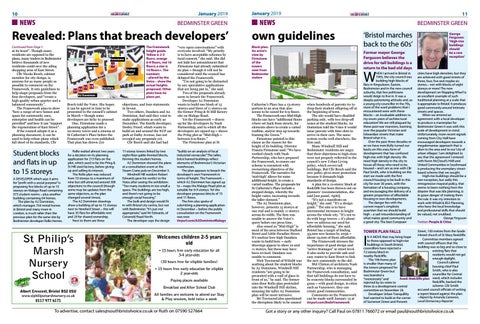 Revealed: Plans that breach developers’ Continued from Page 1 at its heart”. Though many residents are opposed to the plans, many traders in Bedminster believe thousands of new residents could save the ailing shopping area of East Street. Cllr Nicola Beech, cabinet member for city design, is anxious for as many people as possible to comment on the Framework. It sets guidelines to help shape proposals from the four developers, and “create a high quality urban quarter and a balanced community”. The Framework aims to show “how a range of new homes and space for community uses, enterprise and health can be provided” and how it can “support the regeneration of East Street”. If the council adopts it as a planning document, it can be used to help refuse plans which fall short of its standards, Cllr

Student blocks and flats in up to 15 storeys A DEVELOPER which says it aims for “profit with a social purpose” is proposing five blocks of up to 15 storeys on Malago Road containing 573 student rooms – plus another building containing 64 homes. The plan by A2 Dominion, which manages 750 rental homes in Bristol and many more in London, is much taller than the previous plan for the same site by Bedminster developer Rollo Homes.

objections, and four statements in favour. Two others, Dandara and A2 Dominion, had said they want to make applications as early as December. The fourth developer, Deeley Freed, which wants to build on and around the NCP car park at Dalby Avenue, has not revealed any proposals yet. Cllr Beech said she had had

Rollo waited almost two years for a decision on its planning application for 215 flats on the plot, which used to be the Pring & St Hill steel factory, before giving up and selling its interest. The Rollo plan was reduced from 10 storeys to a maximum of nine but still attracted around 500 objections to the council (though some may be updates from the same objectors, as the plan changed several times). The A2 Dominion drawings show a building of up to 15 storeys next to Hereford Street – this will have 35 flats for affordable rent and 29 for shared ownership. Next to them are three

11-storey towers linked by two eight-floor gable-fronted blocks, forming the student homes. A2 Dominion showed the plans at a consultation event at the Steam Crane pub on December 5. Windmill Hill resident Robert Edwards gave his verdict to the Voice after seeing the exhibition: “Too many students in too small a space. The buildings are too high, and there’s not going to be enough social housing.” The bulk and design would fit in with Bristol city centre, but not with Bedminster. “It’s just not appropriate,” said Mr Edwards, of Cotswold Road North. The developer says the design

“builds on an analysis of local industrial vernacular.” The taller, brick framed buildings reflect elements of Bedminster’s Victorian warehouses. The plan appears to breach the developer’s own Framework in terms of height. The Framework – which A2 Dominion has signed up to – maps the Malago Road plot as suitable for 6-9 storeys. Yet the developer proposes blocks of 15 and 11 floors. The firm also spoke of submitting a planning application in December – before the public consultation on the Framework was over. tinyurl.com/A2DominionMalago

Beech told the Voice. She hopes it can be agreed in time to be presented to the council’s cabinet in March – though some developers are itchy to proceed. One, Firmstone made a planning application for a 22-storey tower and a cinema at St Catherine’s Place before the Framework was even published. That plan has drawn 210

“very open conversations” with everyone involved. “My priority is to have acceptable schemes by local consent,” she said. She did not hide her astonishment that Firmstone had already submitted its plan – though it will not be considered until the council has debated the Framework. “I’m not going to be distracted by any speculative applications that are being put in,” she said. Two of the proposals already seem to breach the Framework. Developer A2 Dominion wants to build one block of 15 storeys and three of 11 storeys on the former Pring & St Hill factory site on Malago Road. Yet the Framework – drawn up for the developers by Nash Partnership, and to which all the developers are signed up – shows the Pring plot as “Mid-High – between 6-9 floors.” The Firmstone plan at St

The Framework height guide. Yellow is 2-5 floors, orange 6-9 floors, red 10 floors; a star is 10 floors+. The numbers – placed by the Voice – show the actual heights proposed. Other plots have no plans yet.

All families are welcome to attend our Stay & Play sessions, held twice a week

Block plan: An artist’s view by Firmstone of the towers seen from Bedminster station

Catherine’s Place has a 13-storey portion in an area that also seems to be zoned for 6-9 floors. The Framework says Mid-High blocks can have “additional floors where set back from streets, for elements above to create a varied roofline, and/or step up towards framing the Green.” Firmstone pointed to this clause as the reason for the height of its building. Director Francis Firmstone said: “We have worked closely with Nash Partnership, who have prepared the Framework, to ensure our scheme is consistent with overarching objectives of the Framework. The narrative for ‘mid-high’ allows for some additional height, to create a varied roofline. The proposals for St Catherine’s Place include a stepped design, whereby the height varies, increasing towards the taller element.” The A2 Dominion plan, however, presents 15 storeys at one end and is mainly 11 storeys across its width. The firm was unable to answer the Voice’s query before our press time. Also zoned as “Mid-High” is most of the area between Stafford Street and Little Paradise Street. It’s unclear how high Dandara wants to build here – early drawings appear to show 10 and 11 storeys, but these may have been revised. Dandara was unable to comment. Nick Townsend of WHaM was scathing about the student blocks by A2 Dominion. Windmill Hill residents “are going to be presented with a wall of glass in front of us,” he said. The former nine-floor Rollo plan protruded into the Windmill Hill skyline, meaning the taller A2 Dominion plan will be more intrusive. Mr Townsend also questioned the disruption likely to be caused

W when hundreds of parents try to drop their student offspring off at the beginning of term. The site would have disabled parking only, with two drop-off zones at the student blocks. A2 Dominion told the Voice it would issue parents with time slots to arrive in their cars. The same system works well elsewhere, the firm said. Many Windmill Hill and Bedminster residents are angry that their objections to high-rises were not properly reflected in the council’s new Urban Living policy, which covers tall buildings. But Cllr Beech said the new policy gives more protection because it demands high standards of design. A plan for a 12-storey block at Redcliffe has been thrown out on planners’ recommendation, she said [see panel, right]. “It’s not a manifesto on height,” she said. “It’s a design guide.” The aim is to have incremental increases in height across the whole city. “It’s not to do with huge towers – it’s about how we address our need for affordable housing,” she said. Bristol has a target of finding 33,000 new homes by 2036 – about 19,000 of them affordable. The Framework stresses the importance of good design and “active frontages” at street level. It also seeks to provide safe and easy routes to East Street to link the new community to the old. Mel Clinton of architects Nash Partnership, who is managing the Framework consultation, said that tall buildings do not have to be concrete blocks surrounded by grass – with good design, in cities such as Vancouver, they can create good communities. Comments on the Framework can be made until January 13 at tinyurl.com/BedsFramework

HEN I arrived in Bristol in 1965, the city council was building high blocks of flats in Kingsdown, Easton, Bedminster and in the new council suburbs, that few politicians would deign to live in. It was a deeply patronising attitude and, as a young city councillor in the 70s, most of the ward problems that I encountered were with these blocks – an invaluable addition to my seven years of architectural education! We are still plagued by these post-war monsters, looming over the popular Victorian and Edwardian streets that make Bristol what it is. Over the past three decades or so we have mercifully turned our backs on this crass form of development that has confused high-rise with high density. We need high density in the city to house all those who need to be housed – and I am as one with Cllr Paul Smith, who is building on the start we made with the first council housing to be built in this city for over 30 years, with the formation of a housing company, and encouraging the delivery of a greater proportion of affordable housing in new developments. The danger lies with the current mayor’s simplistic assertion that we should build high – a sad misunderstanding of what makes good community and a good city. The best European

cities have high densities, but they are achieved with good streets of three, four, five and maybe six stories – not with blocks of eight storeys or more! The new development on Wapping Wharf is an excellent example of such traditional planning at a scale that is appropriate to Bristol. It produces good community around intimate streets and spaces.   When we entered an agreement with a local developer to produce a masterplan for Bedminster Green it was with this scale of development in mind. Unfortunately, more recent signals coming from City Hall have encouraged developers towards a megalomaniac approach that is alien to the area and to our ‘city of urban villages’. I am delighted to see that the agreement I entered with Kevin McCloud’s HAB and United Communities in Southmead is producing the exemplary streetbased scheme that we sought. High-rise buildings should be a rare exception, but sadly this retrogressive mayoral policy, that seems to learn nothing from the disaster that was 60s planning, is in grave danger of making them the rule. It was my intention to work with WHaM & BS3 Planning, who have the local knowledge and professional skills that should be valued, not snubbed. George Ferguson Twitter: People & Cities

Street, 150 metres from the Grade I-listed church of St Mary Redcliffe. N A MOVE that may bring hope Committee members agreed to those opposed to high-rise with council officers that the buildings in South Bristol, building was so big and so close to councillors have rejected a existing flats that 12-storey block in residents would not get nearby Redcliffe. enough daylight. The 196-home plan Council cabinet is smaller than many of housing chief Paul the towers proposed for Smith, who is also Bedminster Green but councillor for Central was branded a Axed: Redcliffe plan ward, which includes “monstrosity” and Redcliffe, backed the rejected by six votes to scheme. Cllr Smith three at a development control accused council officials of writing committee on November 28. a report biased against the plan. Developer Urban Tranquillity • Report by Amanda Cameron, had wanted to build at the corner Local Democracy Reporter of Somerset Street and Prewett