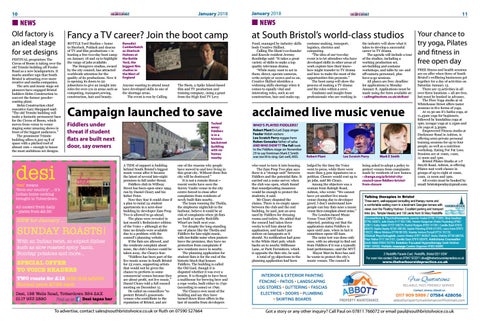 n NEWS Old factory is Fancy a TV career? Join the boot camp Benedict BOTTLE Yard Studios – home an ideal stage Cumberbatch to Sherlock, Poldark and dozens Sherlock of TV and film productions – is for set designs hosting a free two-day boot camp asHolmes at FESTIVAL proprietors The Circus of Boom is taking over the old Trimite building off Feeder Road as a new headquarters. It marks another sign that South Bristol is attracting ever more creative and media companies. The arts and music stage set pioneers have engaged Bristol builders Helm Construction to convert the former powdercoating plant. Helm Construction chief executive Gary Sheppard said: “The old Trimite building will make a fantastic permanent base for the Circus of Boom, which moves from venue to venue staging some amazing shows in front of the biggest audiences.” The prominent Trimite building offers 6,500 sq ft of space with a pitched roof of almost 10m – enough to house the most ambitious set designs.

on January 18 and 19 to highlight the range of jobs available. The Hengrove studios, owned by the city council, has attracted worldwide attention for the quality of its productions. Now it is opening its doors to 50 jobseekers to give an insight into roles for over-21s in areas such as computing, transport,sewing, construction, hair and beauty.

the Bottle Yard, the biggest film studios in the West of England

Anyone wanting to attend must have developed skills in one of the shortage areas. The event is run by Calling

The Shots, a Spike Island-based film and TV production and training company, using a grant from the High End TV Levy

Campaign launched to save Fiddlers under threat if student flats are built next door, say owners

SUNDAY ROASTS! With an Indian twist, so expect dishes such as slow roasted spicy lamb, Bombay potatoes and more...

Tucked away: Fiddlers is in a historic backstreet building with no homes nearby A TIDE of support is building behind South Bristol’s biggest music venue after it became the latest of several late-night premises to fall under threat. Fiddlers club in Willway Street has been open since 1994, run by Daniel Cleary and his father Peter. Now they fear it could close if a plan to instal 24 student apartments in a next-door building by developer Zam Prop Two is allowed to go ahead. The plans were revealed in last month’s Bedminster edition of the Voice – although at the time no details were available due to a problem with the council’s planning website. If the flats are allowed, and the residents complain about noise, the club’s licence could be taken away, the Clearys fear. “Fiddlers has been part of the live music scene in South Bristol for 23 years, supporting artists that would not be given the chance to perform in some commercial venues because they are about profit, not live music,” Daniel Cleary told a full council meeting on December 12. He called on councillors “to protect Bristol’s grassroots venues who contribute to the reputation of Bristol, and are

one of the reasons why people have moved to and love living in this great city. Without them this city will be destroyed.” It is not a remote threat – recent weeks have seen the Surrey Vaults venue in the city centre forced to close after complaints from residents of newly built flats nearby. The team running the Thekla, the shipborne nightclub in the harbour, believe it could be at risk of complaints when 36 flats are built at nearby Redcliffe Wharf are built next year. Yet despite the long-standing use of places like the Thekla and Fiddlers for late-night music, with inevitable noise when punters leave the premises, they have no protection from complaints if new residents move in nearby. The planning application for student flats is for the end of the historic block that houses Fiddlers. The building is called the Old Gaol, though it is disputed whether it was ever a prison. It is thought to have been a malthouse for brewing beer and a rope works, built either in 1740 (according to some) or 1790. The Clearys own most of the building and say they have turned down three offers in the last 18 months from developers

at South Bristol’s world-class studios Fund, managed by industry skills body Creative Skillset. Calling The Shots’s co-founder and Knowle resident Jeremy Routledge said: “It takes a great variety of skills to make a top quality television drama. “While many want to act in them, direct, operate cameras, write scripts or scores and so on, Creative Skillset identifies a widening skills shortage when it comes to equally vital and interesting roles, such as set construction, hair and make-up,

costume-making, transport, logistics, electrics and computing. “The idea of our two-day event is to let attendees who have developed skills in other areas of work explore how their knowhow might transfer to TV drama and how to make the most of the opportunities this presents.” The boot camp will show the process of making a TV drama and the roles within a crew. Guidance and insight from professionals who are working in

the industry will show what it takes to develop a successful career in TV drama. The agenda will include a tour of the studios, including a working production set, set-building and costume workshops, and talks by on- and off-camera personnel, plus have-a-go sessions. All places are free: deadline for applications is Monday January 8. Applications must be made using the form available at: • callingtheshots.co.uk/skillset/

acclaimed live music venue WHO’S PLAYED FIDDLERS? Robert Plant Ex-Led Zepp singer Feeder Welsh rockers Lee Scratch Perry reggae hero Ruben Gonzalez father of salsa AND WHO DIDN’T? The Fall took to the Fiddlers stage on November 29 to say frontman Mark E Smith was too ill to sing. Get well, MES. who want to turn it into housing. The Zam Prop Two plan says there is a “storage unit” between Fiddlers and the potential flats. It carried out a noise survey when the club was open, which found that soundproofing measures would be enough to protect the students, it said. Mr Cleary disputed the claims. There is no empty space between the club and the end building, he said, just an area used by Fiddlers for dressing rooms and toilets. He added that the council had taken three weeks to tell him about the application, and hadn’t put notices on lampposts as it should. No notification had gone to the White Hart pub, which backs on to nearby Stillhouse Lane, or Park Furnishers, which is opposite the flats site, he said. A total of 33 objections to the planning application had been

lodged by the time the Voice went to press, while there were more than 3,300 signatures on a petition. Closure would cost up to 30 jobs, said Mr Cleary. Among the objectors was a woman from Raleigh Road, Ashton, who wrote: “We cannot have yet another live music venue closing due to developer greed. I don’t understand how people can buy flats near a music venue then complain about noise.” The London-based Music Venue Trust (MVT) also objected, pointing out that the application states Fiddlers is open until 2am, when in fact it sometimes opens till 6am. The noise test was done only once, with no attempt to find out from Fiddlers if it was a typically loud performance, said the MVT. Mayor Marvin Rees has said he wants to protect the city’s music venues. The council is

being asked to adopt a policy to protect venues from complaints made by residents of new homes. • change.org/p/bristol-citycouncil-save-fiddlers-bristolfrom-closure

FREE fitness and health sessions are on offer when three of South Bristol’s wellbeing businesses get together for a day of activities on Saturday January 13. There are 13 activities in all over three locations – all are free, but must be booked in advance. The Flow Yoga studio at 16 Whitehouse Street offers taster sessions in five forms of yoga. At 10.30 am it’s hatha yoga, at 11.45am yoga for beginners, followed by kundalina yoga at 1pm, iyengar yoga at 2.15pm and yin yoga at 3.30pm. Empowered Fitness studio at Duckmoor Road in Ashton, is offering semi-private personal training sessions for up to four people, as well as a nutrition workshop, Eating For Fat Loss. Sessions are at 10am, 11am, 12 noon and 1pm. Bristol Pilates Studio at 1-7 Smyth Road, Ashton, is offering Pilates mat work classes in groups of up to eight at 10am, 11am, 12 noon and 1pm. All events must be booked by email: bristolopenday@gmail.com.

Your chance to try yoga, Pilates and fitness in free open day

• PATIOS • LANDSCAPING Got a story or any other inquiry? CallFENCING Paul on 07811 766072 or email paul@southbristolvoice.co.uk