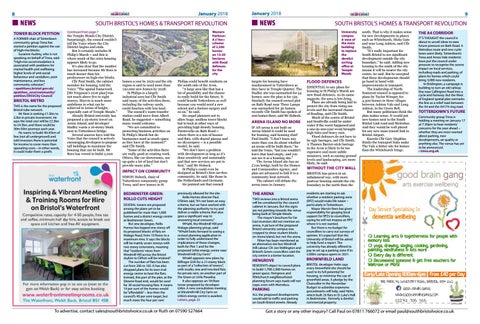 TOWER BLOCK PETITION A FORMER chair of Totterdown community group Tresa has started a petition against the use of high-rise blocks. Suzanne Audrey, who is not speaking on behalf of Tresa, said: “High-rise accommodation is associated with problems for mental health and wellbeing, higher levels of anti-social behaviour and vandalism, poor maintenance, and less community cohesion.” • epetitions.bristol.gov.uk/ epetition_core/community/ petition/3955City Council

BRISTOL METRO THIS is the name for the proposed Bristol tube network. Mr Rees is seeking £1.5bn to £2bn in private investment. He says the total cost will be £2.5bn to £4.5bn, and there could be 30m-50m journeys each year. He wants to build 40-45km of line (not all underground) and told investors there is potential for income to cover more than operating costs – in other words, it could make them a profit.

Continued from page 7 the Temple Meads City District. Surprisingly, the council couldn’t tell the Voice where the City District begins and ends. But it certainly includes St Philip’s Marsh – and this is where much of the extra housing appears likely to go. It’s also clear that the number has increased because Mr Rees is much keener than his predecessor on high-rise blocks. Cllr Paul Smith, the cabinet member for housing, told the Voice: “The spatial framework [Mr Ferguson’s 2016 plan] was not much above five to eight storeys. Marvin is much more ambitious in what can be achieved in terms of height, especially east of Temple Meads.” Already Bristol university has proposed a 25-storey tower on Arena Island, and developer Hadley wants a 16-storey block next to Totterdown bridge. Several sources have told the Voice that the council is actively encouraging developers to propose tall buildings to maximise the housing that can be built. Mr Rees has vowed to build 2,000

Western Harbour: A £1bn+ scheme of 3,500 homes on 15-20 hectares with flood defences for the city homes a year by 2020 and the city region is said to need more than 120,000 new homes by 2028. St Philips is a largely industrial area but Cllr Smith said many of the activities there, including the railway yards, could function with less land. The council’s waste transfer station could move from Albert Road, he suggested – something many would welcome. “We are committed to protecting business activities on St Philip’s Marsh but do businesses need as much space as they have at the moment?” said Cllr Smith. “Some of the activities there are really good at creating work. Others, like car showrooms, use up quite a lot of land but don’t provide many jobs.”

BEDMINSTER GREEN: ROLLO CUTS HEIGHT SEVERAL towers are proposed among the plans yet to be published for more than 1,000 homes and a district energy centre at Bedminster Green. But one developer, Rollo Homes has lopped one storey off its proposed blocks of flats on Malago Road, from 10 floors to a maximum nine. It says the blocks will be mainly seven storeys with two storey extensions, meaning that “residents’ views from Windmill Hill across the Bristol skyline to Clifton will be retained”. The number of flats has been cut from 206 to 183. It has also dropped plans for its own rival energy centre to heat the flats. Instead, this part of the plot, at the Sheene Road end, would be used for 30 social housing flats. It means 14 per cent of the homes would be “affordable” – less then the council’s 40 per cent target, but much more the four per cent

targets for housing have mushroomed in Totterdown as they have in Temple Quarter. The Hadley site was earmarked for 54 homes; now the plan is for 159. Similarly the council-owned plot on Bath Road near Three Lamps was earmarked for 30 homes; recently Cllr Smith has spoken of 200 homes there, said Mr Hobeck.

previously allowed for the site. Rollo Homes director Paul O’Brien said, “It’s not been an easy scheme, but we have worked with the planning authority to try and deliver a viable scheme that also goes a significant way to answering local concerns.” WHaM, the Windmill Hill and Malago planning group, said: “WHaM looks forward to seeing a revised planning application in order to fully understand the implications of these changes, both for Plot 1 and for the proposed Urbis energy centre near Windmill Hill City Farm.” WHaM opposes new plans by Bilfinger GVA for a 21-storey block as part of a “collection of towers”, with studio, one and two-bed flats for private rent, on another part of the Green at Little Paradise. It also opposes an 18-floor tower proposed by developer Urbis. A new consultation meeting at Windmill Hill City Farm on Urbis’s energy centre is awaited. Letters, page 25

ARENA ISLAND NO MORE IF AN arena is not built on Arena Island it could be used for housing, said housing chief Paul Smith. “I don’t know any more than you do about whether an arena will be built there,” he told the Voice, “but you wouldn’t leave that land empty, and you can see it as a housing site.” The Arena Island site has an £11m bridge, built by the Homes and Communities Agency, and plan are advanced to link it to a community heat network. The cabinet will debate the arena issue in January.

TWO reviews into a Bristol arena will be considered by the council cabinet in January. But the signs are not pointing towards the venue being built at Temple Meads. The mayor’s brochure for Far East investors did not mention an arena. A picture of the proposed Bristol university campus was cropped to show student blocks on Arena Island, but not the arena. Filton has been mentioned as an alternative site but Windmill Hill Labour Cllr Jon Wellington and Bristol’s Green councillors said the city centre is a better location.

HENGROVE RESIDENTS object to council plans to build 1,700-2,000 homes on green space. Hengrove and Whitchurch neighbourhood planning forum says roads will not cope, even with Metrobus.

PARKING ALL the proposed developments would add to traffic and parking on South Bristol streets. Already

Philips could benefit residents on the south side of the Avon. “A large area like that has a lot of possibility and the chance to really build for the future. It could benefit Totterdown as well because you would need a new school and a doctors surgery and so on,” he said. He urged planners not to allow huge, soulless tower blocks but to look at other ways of providing high density housing. Paintworks on Bath Road – where there is a mix of houses and flats, with shared piazzas and no skyscrapers – is a possible model, he said. “We don’t have a problem with development as long as it’s done sensitively and sustainably and that new services are put in first,” said Mr Hobeck. St Philip’s could even be designed as Bristol’s first car-free community, he said, like those in the Netherlands and Germany. He pointed out that council

FLOOD DEFENCES ESSENTIAL to any plans for housing in St Philip’s Marsh are new flood defences. As its name suggests, the area is low-lying. Plans are already being laid to protect the city from rising sea levels and the increased chance of flooding, said Cllr Smith. Much of the centre of Bristol and Southville could be under water if the worst happened and a one-in-100-year event brought high tides and heavy rain. Flood defences do not have to be ugly barrages, sad Cllr Smith. A Thames Barrier-style barrage in the Avon is likely to be too expensive and more subtle measures, such as raising ground levels and landscaping, are more likely, he said.

south. That is why it makes sense for new developments in places such as Whitchurch, Hicks Gate and near Long Ashton, said Cllr Smith. “It’s really important for South Bristol to see significant development outside the city boundary,” he said. Adding new housing to the south of the city means it will be nearer the city centre, he said. But he accepted that these developments should go hand in hand with improvements in transport. The leadership of North Somerset council is opposed to plans by Taylor Wimpey for 4,500 homes in three villages between Ashton Vale and Long Ashton, in the Green Belt. But many politicians think the plan makes sense. It would put new homes next to the South Bristol Link road and Metrobus. And they would be well placed for any new mass transit link to Bristol Airport. Knowle Cllr Gary Hopkins thinks the transport links make The Vale a better site for homes than the Whitchurch fringe.

THE A4 CORRIDOR IT’S THOUGHT the council is about to unveil ideas to ease future pressure on Bath Road. A Metrobus route and new cycle lanes seem likely. Totterdown’s Tresa and Arnos Vale residents have put the council under pressure to recognise the severe impact on local services, including roads and parking, of plans for homes which could bring 3,000 new residents. In Brislington, a campaign is building to turn an old railway line near Callington Road into a cycle and footway. But the West of England spatial plan earmarks the line as a relief road between the A4 and the A4174 ring road.

TOTTERDOWN’S FUTURE Community group Tresa is holding a meeting on January 17 at 7.30pm to hear residents’ concerns for the year ahead – whether they are most worried about parking, new developments, air quality or anything else. The venue has yet to be announced. • tresa.org.uk

WITHOUT THE CITY WALL

BRISTOL has grown in an unbalanced way, with more postwar housing outside the city boundary to the north than the residents are starting to ask whether a resident parking zone (RPZ) would make life easier – particularly in Totterdown. Mayor Marvin Rees has given responsibility for gauging local support for RPZs to councillors, saying he will not impose an RPZ where it is not wanted. But there is no budget for councillors to carry out surveys of opinion. It’s expected that the University of Bristol will be asked to help fund a report. The university has already offered to pay to set up a parking zone if its £300m campus opens in 2021.

BRISTOL developer Helm says every brownfield site should be used to its full potential for housing, to minimise the use of greenfield areas. A pledge by the Chancellor in the November Budget to subsidise expensive groundworks will help, said Helm, which built 26 flats in St Luke’s Hall in Bedminster, formerly a derelict commercial property.