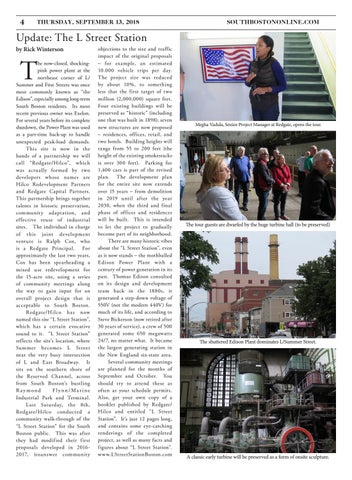 he now-closed, shockingpink power plant at the northeast corner of L/ Summer and First Streets was once most commonly known as “the Edison”, especially among long-term South Boston residents. Its most recent previous owner was Exelon. For several years before its complete shutdown, the Power Plant was used as a part-time back-up to handle unexpected peak-load demands. This site is now in the hands of a partnership we will call “Redgate/Hilco”, which was actually formed by two developers whose names are Hilco Redevelopment Partners and Redgate Capital Partners. This partnership brings together talents in historic preservation, communit y adaptation, and effective reuse of industrial sites. The individual in charge of t his joint development venture is Ralph Cox, who is a Redgate Principal. For approximately the last two years, Cox has been spearheading a mixed use redevelopment for the 15-acre site, using a series of community meetings along the way to gain input for an overall project design that is acceptable to South Boston. Redgate/Hilco has now named this site “L Street Station”, which has a certain evocative sound to it. “L Street Station” ref lects the site’s location, where Summer becomes L Street near the very busy intersection of L and East Broadway. It sits on the southern shore of the Reserved Channel, across from South Boston’s bustling R aymond Flynn/Marine Industrial Park and Terminal. Last Saturday, the 8th, Redgate/Hilco conducted a community walk-through of the “L Street Station” for the South Boston public. This was after they had modified their first proposals developed in 20162017, itoanswer communit y

objections to the size and traffic impact of the original proposals – for example, an estimated 10.000 vehicle trips per day. The project size was reduced by about 10%, to something less that the first target of two million (2,000,000) square feet. Four existing buildings will be preserved as “historic” (including one that was built in 1898); seven new structures are now proposed – residences, offices, retail, and two hotels. Building heights will range from 55 to 200 feet (the height of the existing smokestacks is over 300 feet). Parking for 1,400 cars is part of the revised plan. The development plan for the entire site now extends over 15 years – from demolition in 2019 until after the year 2030, when the third and final phase of offices and residences will be built. This is intended to let the project to gradually become part of its neighborhood. There are many historic vibes about the “L Street Station”, even as it now stands – the mothballed Edison Power Plant with a century of power generation in its past. Thomas Edison consulted on its design and development team back in the 1880s, it generated a step-down voltage of 550V (not the modern 440V) for much of its life, and according to Steve Bickerson (now retired after 30 years of service), a crew of 500 generated some 650 megawatts 24/7, no matter what. It became the largest generating station in the New England six-state area. Several community meetings are planned for the months of September and October. You should try to attend these as often as your schedule permits. Also, get your own copy of a booklet published by Redgate/ Hilco and entitled “L Street Station”. It’s just 12 pages long, and contains some eye-catching renderings of the completed project, as well as many facts and figures about “L Street Station”. w w w.LStreetStationBoston.com

A classic early turbine will be preserved as a form of onsite sculpture.