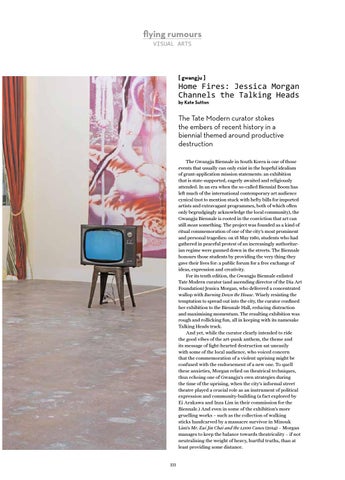 The Tate Modern curator stokes the embers of recent history in a biennial themed around productive destruction The Gwangju Biennale in South Korea is one of those events that usually can only exist in the hopeful idealism of grant-application mission statements: an exhibition that is state-supported, eagerly awaited and religiously attended. In an era when the so-called Biennial Boom has left much of the international contemporary art audience cynical (not to mention stuck with hefty bills for imported artists and extravagant programmes, both of which often only begrudgingly acknowledge the local community), the Gwangju Biennale is rooted in the conviction that art can still mean something. The project was founded as a kind of ritual commemoration of one of the city’s most prominent and personal tragedies: on 18 May 1980, students who had gathered in peaceful protest of an increasingly authoritarian regime were gunned down in the streets. The Biennale honours those students by providing the very thing they gave their lives for: a public forum for a free exchange of ideas, expression and creativity. For its tenth edition, the Gwangju Biennale enlisted Tate Modern curator (and ascending director of the Dia Art Foundation) Jessica Morgan, who delivered a concentrated wallop with Burning Down the House. Wisely resisting the temptation to spread out into the city, the curator confined her exhibition to the Biennale Hall, reducing distraction and maximising momentum. The resulting exhibition was rough and rollicking fun, all in keeping with its namesake Talking Heads track. And yet, while the curator clearly intended to ride the good vibes of the art-punk anthem, the theme and its message of light-hearted destruction sat uneasily with some of the local audience, who voiced concern that the commemoration of a violent uprising might be confused with the endorsement of a new one. To quell these anxieties, Morgan relied on theatrical techniques, thus echoing one of Gwangju’s own strategies during the time of the uprising, when the city’s informal street theatre played a crucial role as an instrument of political expression and community-building (a fact explored by Ei Arakawa and Inza Lim in their commission for the Biennale.) And even in some of the exhibition’s more gruelling works – such as the collection of walking sticks handcarved by a massacre survivor in Minouk Lim’s Mr. Eui Jin Chai and the 1,000 Canes (2014) – Morgan manages to keep the balance towards theatricality – if not neutralising the weight of heavy, hurtful truths, than at least providing some distance. 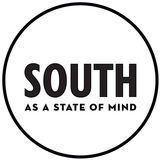 South as a State of Mind

Teaser of South as a State of Mind issue # 5

Flip through some pages of the brand new South as a State of Mind! fall / winter 2015, fifth issue www.southasastateofmind.com/current-issue

Teaser of South as a State of Mind issue # 5

Flip through some pages of the brand new South as a State of Mind! fall / winter 2015, fifth issue www.southasastateofmind.com/current-issue