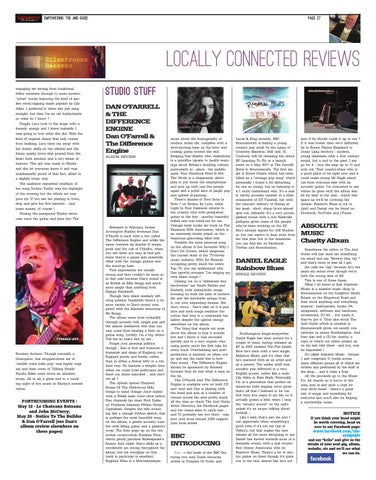 empowering the and guide

LOCALLY CONNECTED REVIEWS engaging set swung from traditional folksy numbers through to more modern &quot;urban&quot; tracks featuring the kind of spoken word/rapping made popular by Lily Allen. I preferred it when she just sang straight, but then I&#39;m an old fuddy-duddy so what do I know ? Fragile Lucy took to the stage with a frenetic energy and I knew instantly I was going to love what she did. With the kind of original charm that only comes from busking, Lucy blew me away with her frantic skills on the ukelele and the funny, quirky lyrics that poured from the heart both emotion and a wry sense of humour. This girl was made in Shirley and she let everyone know it and was unashamedly proud of that fact, albeit in a slightly ironic way. The audience requested rendition of her song Techno Teddy was the highlight of the evening but the whole set was pure joy. If you see her playing in town, stop and give her five minutes .. and some money, of course ! Closing the inaugaural Shirley showcase were the guitar and keys duo The

Sturmey Archers. Though normally a three-piece, this stripped-down set of &quot;midlife crisis indie pop&quot; was highly original and their cover of Talking Heads&#39; Psycho Killer went down an absolute storm. All in all, a great end to a cracking night of live music in Shirley&#39;s newest venue.

moan about the homogeneity of modern urban life, complete with a slow-burning bass on the intro and rousing guitar toward the end. Keeping that Smiths vibe, Anhedonia is a quickfire riposte to health warnings about Britain&#39;s drinking culture, particularly in - ahem - the middleaged. Your Facebook Feed Is Not The World is a desperately direct plea to put down the smartphones and pick up with real live people again and a joyful slice of jangly pop and upbeat drumming. There&#39;s shades of How Soon Is Now ? on Broken By Love, while Light In Your Darkness returns to the country vibe with pedal-steel guitar to the fore : another beautiful ballad and real stand-out for me. Vintage indie hooks are back on The Nazarene Rifle Association, which is an extremely timely attack on the American gun-toting bible belt. Possibly the most personal song on the album is live favourite Why I Don&#39;t Do Covers, which lampoons the current state of the TV-driven music industry. With Ed Sheeran occupying pretty much the entire Top 75, you can understand why Dan (gently) screams &quot;I&#39;m singing my own damn songs !&quot; Closing out on a &quot;deliberate double-downer&quot; are Death Rattles and Easterly, both melancholic songs focusing on both the pain of modern life and the inevitable escape from it, our own impending demise. But don&#39;t worry : Dan&#39;s take on it is positive and both songs reinforce the notion that here is a consumate balladeer despite the upbeat energy elsewhere on the album. The thing that stands out most about the album is that it sounds live and I know it was recorded quickly and in a very organic way, using pretty much the first take for every track. Overdubbing and postproduction is minimal, so when you go and see the band this is how they sound : The Difference Engine should be sponsored by Ronseal because they do just what it says on the tin. Dan O&#39;Farrell And The Difference Engine is available now on both CD and vinyl and Dan is playing with the band and solo at a number of venues across the area pretty much all the time so check The And Guide Artist Directory, his Facebook pages and the venue sites to catch him .. and I&#39;ll probably see you there : support your local venues AND support your local artists.

Released in February, former Accrington Stanley frontman Dan O&#39;Farrell is back with a trio called The Difference Engine and while the name conjures up shades of steampunk and the cult of Cthulhu, when you see them you may at first presume they&#39;re a gypsy jazz ensemble what with the vintage guitars and the stand-up bass. First impressions are usually wrong and they couldn&#39;t be more so in this case because Dan&#39;s sound is as British as Billy Bragg and much more jangly than anything from Django Reinhardt. Though they share similarly leftwing politics, thankfully there&#39;s a lot more variety to Dan&#39;s sound compared with the Marmite monotony of Mr Bragg. The album veers from rockabilly through acoustic folk, jangly pop and the almost mediaeval vibe that can only come from hearing a flute on a guitar song. Luckily, I&#39;m a big Jethro Tull fan so that&#39;s fine by me .. Forget your personal politics though : Dan is first and foremost a humanist and sings of England, our England purely and fondly, rather than in either a liberal lefty or a militant way. He laments a simpler time when we could trust politicians and leave our doors unlocked .. and don&#39;t we all ? The upbeat opener Haunted House Of The Hollywood Hills brings to mind Orange Juice mixed with a Welsh male voice choir before Dan channels his inner Nick Drake on Problems Inherent Within Global Capitalism. Despite the title sounding like a vintage Python sketch, this is perhaps the most beautiful song on the album, a gentle acoustic number with lilting guitar and a plaintive vocal. The flute pops up on the otherwise country-style Rosaline Wins, which gently parodies Shakespeare&#39;s Romeo And Juliet. Dan&#39;s skills as a wordsmith are strong throughout the album, but his wordplay on this ZEN JUDDISM Hot on the heels of the BBC featrack in particular is excellent. turing two And Guide favourite England Wins is a Morrisseyesque artists in Temples Of Youth and

Lucas &amp; King recently, BBC Bournemouth is hailing a young country pop artist by the name of Courtney Manston. Still only 15, Courtney will be releasing her debut EP Learning To Fly at a launch event on 5 May 2017 at The Suncliff Hotel in Bournemouth. The first single is Sweet Poison which has been billed as a &quot;revenge pop song&quot; which personally I found a bit disturbing for one so young, but on listening to it I could understand why. It&#39;s a really catchy acoustic number in a style reminscent of KT Tunstall, but with the staccato delivery of Shania at her peak - short, sharp lyrics almost spat out, defiantly. It&#39;s a very accomplished sound with a rich Nashville pedigree given some of the people who&#39;ve been working on the EP. She&#39;s already signed for AM Studios so you can expect to hear more from her this year, but in the meantime you can find her on Facebook, Twitter and Reverbnation..

Southampton singer-songwriter Daniel Eagle has been around for a couple of years, having released an EP in 2015 entitled The Fire Inside. Now he&#39;s back with a new single, Rainbow Blues, and it&#39;s clear that he&#39;s matured both as an artist and as a person. The earlier stuff was acoustic pop delivered in a very English accent, rather like a male Lily Allen or Kate Nash. Personally I&#39;m of a generation that prefers an American style singing voice given that&#39;s all that I listened to for the first forty five years of my life, so it actually grates a little when I hear the &quot;estuary accent&quot; on the radio unless it&#39;s an ex-pro talking about football ... Like I said, that&#39;s just me and I can appreciate when something&#39;s good even if it&#39;s not my cup of Tetley&#39;s, but that makes the new release all the more intriguing to me. Daniel has moved towards more of a stateside sound, with a real countrified, bluesy Americana vibe on Rainbow Blues. There&#39;s a lot of electric guitar on there though it&#39;s quite low in the mix, almost like he&#39;s not

sure if he should crank it up or not ? If it was louder then we&#39;d definitely be in Kenny Wayne Shepherd or Jonny Lang territory : modern, young bluesmen with a 21st century sound, but a nod to the past. I say go for it : turn the amp up to 11 and rock out. That country-blues vibe is a good place to be right now and it could make young Mr Eagle stand out from everyone else with an acoustic guitar. I&#39;m interested to see where he goes with the album slated for later in the year - watch this space as we&#39;ll be covering the release. Rainbow Blues is out in April and Daniel can be found on Facebook, YouTube and i-Tunes.

ABSOLUTE MUSIC Charity Album Sometimes the editor of The And Guide will just send me something via email and say &quot;Review this, nip !&quot; and that&#39;s more or less all I get. (he calls me &quot;nip&quot; because he&#39;s ten years my senior even though we&#39;re both the wrong side of 50) This is one of those times. What I do know is that Absolute Music is a massive music shop in Bournemouth on the Knighton Heath Estate on the Ringwood Road and they stock anything and everything musical : instruments, books, PA equipment, software and hardware, accessories, DJ kit .. you name it, they&#39;ve got it. They also stock The And Guide which is unusual in Bournemouth given we mostly concentrate on sunny Southampton. And they also sell a CD for charity, a copy of which our editor picked up on his last visit there - and boy, was he impressed ! It&#39;s called Absolute Music - Volume 1 and comprises 11 tracks across many different genres all of which are written and performed by the staff of the shop ... and it costs a fiver. All the proceeds go to the Music For All charity so if you&#39;re in the area, pop in and grab a copy for your drive home : there&#39;s a great mix of songs and something for everyone and you&#39;ll also be helping a worthwhile cause.

NOTICE If you think your band might be worth covering, head on over to our Facebook page:

The most humungous AND Guide yet! 48 funky pages of just about everything going on in the Southampton area and beyond over April & May. New this issue we've started our Pubs With Garden's Guide. No more wondering what to do with the kids! Also a souvenir picture of the all conquering Solent Kestrels Ladies basketball team. We are very, very proud of them! Grab a real one at over 600 pick-up points across the region now - or be square! :) 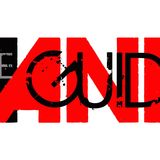