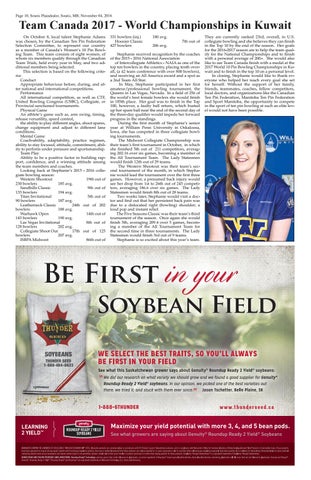 Team Canada 2017 - World Championships in Kuwait On October 8, local talent Stephanie Adams was chosen, by the Canadian Ten Pin Federation Selection Committee, to represent our country as a member of Canada’s Women’s 10 Pin Bowling Team. This team consists of eight women, of whom six members qualify through the Canadian Team Trials, held every year in May, and two additional members being selected. This selection is based on the following criteria: Conduct Appropriate behaviour before, during, and after national and international competitions. Performance All international competition, as well as CTF, United Bowling Congress (USBC), Collegiate, or Provincial sanctioned tournaments. Physical Game An athlete’s game such as, arm swing, timing, release versatility, speed control, the ability to play different angles, shoot spares, change equipment and adjust to different lane conditions. Mental Game Coach-ability, adaptability, practice regimen, ability to stay focused, attitude, commitment, ability to perform under pressure and sportsmanship. Team Play Ability to be a positive factor in building rapport, confidence, and a winning attitude among the team members and coaches. Looking back at Stephanie’s 2015 - 2016 collegiate bowling season: Western Shootout 19th out of 230 bowlers 185 avg. Sandhills Classic 9th out of 133 bowlers 194 avg. Titan Invitational 5th out of 90 bowlers 187 avg. Leatherneck Classic 24th out of 202 bowlers 188 avg. Warhawk Open 14th out of 143 bowlers 190 avg. Las Vegas Invitational 8th out of 128 bowlers 202 avg. Collegiate Shoot Out 17th out of 125 bowlers 207 avg. ISBPA Midwest 86th out of

Stephanie received recognition by the coaches of the 2015 - 2016 National Association of Intercollegiate Athletics - NAIA as one of the top ten bowlers in the country, placing tenth overall, (a 42 team conference with over 800 bowlers), and receiving an All America award and a spot as a 2nd Team All Star. In May, Stephanie participated in her first amateur/professional bowling tournament, the Queens in Las Vegas, Nevada. In a field of 256 of the world’s best female bowlers she would finish in 185th place. Her goal was to finish in the Top 100, however, a faulty ball return, which busted up her spare ball near the end of the second day of the three-day qualifier would impede her forward progress in the standings. During the first month of Stephanie’s senior year at William Penn University in Oskaloosa, Iowa, she has competed in three collegiate bowling tournaments. The Midwest Collegiate Championship was their team’s first tournament in October, in which she finished 5th out of 211 competitors, averaging 202.16 over six games, becoming a member of the All Tournament Team. The Lady Statesmen would finish 12th out of 29 teams. The Western Shootout was their team’s second tournament of the month, in which Stephanie would lead the tournament over the first three games. However, a presumed back injury would see her drop from 1st to 26th out of 245 competitors, averaging 186.6 over six games. The Lady Statesmen would finish 8th out of 28 teams. Two weeks later, Stephanie would visit a doctor and find out that her persistent back pain was due to a dislocated right (bowling) shoulder; a loud pop and instant relief. The Five Seasons Classic was their team’s third tournament of the season. Once again she would finish 5th, averaging 209.4 over 5 games, becoming a member of the All Tournament Team for the second time in three tournaments. The Lady Statesmen would finish 3rd out of 9 teams. Stephanie is so excited about this year’s team.

They are currently ranked 23rd, overall, in U.S. collegiate bowling and she believes they can finish in the Top 10 by the end of the season. Her goals for the 2016-2017 season are to help the team qualify for the National Championships and to finish with a personal average of 200+. She would also like to see Team Canada finish with a medal at the 2017 World 10 Pin Bowling Championships in Kuwait and to finish in the top 10 on a personal level. In closing, Stephanie would like to thank everyone who helped her reach every goal she set for herself. Without the support of her family, friends, teammates, coaches, fellow competitors, local doctors, and organizations like the Canadian Ten Pin Federation, Manitoba Ten Pin Federation and Sport Manitoba, the opportunity to compete in the sport of ten pin bowling at such an elite level would not have been possible.