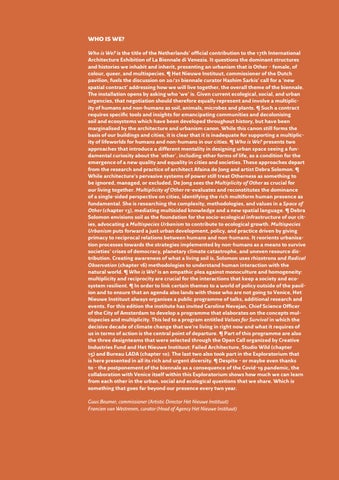 WHO IS WE? Who is We? is the title of the Netherlands’ official contribution to the 17th International Architecture Exhibition of La Biennale di Venezia. It questions the dominant structures and histories we inhabit and inherit, presenting an urbanism that is Other – female, of colour, queer, and multispecies. ¶ Het Nieuwe Instituut, commissioner of the Dutch pavilion, fuels the discussion on 20/21 biennale curator Hashim Sarkis’ call for a ‘new spatial contract’ addressing how we will live together, the overall theme of the biennale. The installation opens by asking who ‘we’ is. Given current ecological, social, and urban urgencies, that negotiation should therefore equally represent and involve a multiplicity of humans and non-humans as soil, animals, microbes and plants. ¶ Such a contract requires specific tools and insights for emancipating communities and decolonising soil and ecosystems which have been developed throughout history, but have been marginalised by the architecture and urbanism canon. While this canon still forms the basis of our buildings and cities, it is clear that it is inadequate for supporting a multiplicity of lifeworlds for humans and non-humans in our cities. ¶ Who is We? presents two approaches that introduce a different mentality in designing urban space seeing a fundamental curiosity about the &#39;other&#39;, including other forms of life, as a condition for the emergence of a new quality and equality in cities and societies. These approaches depart from the research and practice of architect Afaina de Jong and artist Debra Solomon. ¶ While architecture’s pervasive systems of power still treat Otherness as something to be ignored, managed, or excluded, De Jong sees the Multiplicity of Other as crucial for our living together. Multiplicity of Other re-evaluates and reconstitutes the dominance of a single-sided perspective on cities, identifying the rich multiform human presence as fundamental. She is researching the complexity, methodologies, and values in a Space of Other (chapter 13), mediating multisided knowledge and a new spatial language. ¶ Debra Solomon envisions soil as the foundation for the socio-ecological infrastructure of our cities, advocating a Multispecies Urbanism to contribute to ecological growth. Multispecies Urbanism puts forward a just urban development, policy, and practice driven by giving primacy to reciprocal relations between humans and non-humans. It reorients urbanisation processes towards the strategies implemented by non-humans as a means to survive societies’ crises of democracy, planetary climate catastrophe, and uneven resource distribution. Creating awareness of what a living soil is, Solomon uses rhizotrons and Radical Observation (chapter 16) methodologies to understand human interaction with the natural world. ¶ Who is We? is an empathic plea against monoculture and homogeneity: multiplicity and reciprocity are crucial for the interactions that keep a society and ecosystem resilient. ¶ In order to link certain themes to a world of policy outside of the pavilion and to ensure that an agenda also lands with those who are not going to Venice, Het Nieuwe Instituut always organises a public programme of talks, additional research and events. For this edition the institute has invited Caroline Nevejan, Chief Science Officer of the City of Amsterdam to develop a programme that elaborates on the concepts multispecies and multiplicity. This led to a program entitled Values for Survival in which the decisive decade of climate change that we’re living in right now and what it requires of us in terms of action is the central point of departure. ¶ Part of this programme are also the three designteams that were selected through the Open Call organized by Creative Industries Fund and Het Nieuwe Instituut: Failed Architecture, Studio Wild (chapter 15) and Bureau LADA (chapter 10). The last two also took part in the Exploratorium that is here presented in all its rich and urgent diversity. ¶ Despite – or maybe even thanks to – the postponement of the biennale as a consequence of the Covid-19 pandemic, the collaboration with Venice itself within this Exploratorium shows how much we can learn from each other in the urban, social and ecological questions that we share. Which is something that goes far beyond our presence every two year. Guus Beumer, commissioner (Artistic Director Het Nieuwe Instituut) Francien van Westrenen, curator (Head of Agency Het Nieuwe Instituut)

Here you find the second publication (Cahier 2) within ‘Values for Survival’, the parallel research program of the Dutch contribution to 17th Architecture Biennale in Venice. Commissioned by Het Nieuwe Instituut. 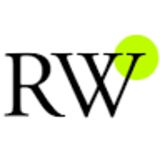