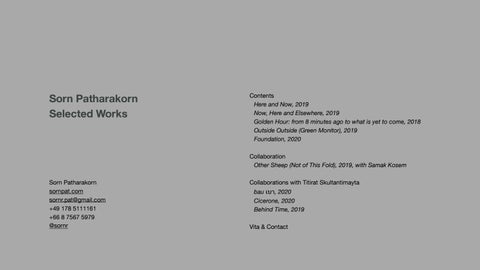 Outside Outside (Green Monitor), 2019

Site-specific installation 1000 × 1700 × 530 cm. Here and Now (2019) is a spatial work where gallery space is defined by walls of light that can be seen but cannot bar ones from going through.    The relationship between observer and space frames the artist’s perception of reality. Throughout Sornrapat Patharakorn’s career, the interest in the relationship is a noticeable recurring motif; that is contributed from years of architectural studies.    Here and Now (2019) is originally counterpart to Now, Here and Elsewhere (2019, see reference). It is made to inspect the typology and metaphysical aspects of gallery spaces and their development from, and relationship to, the prehistoric and historic spaces we consider ‘art’ spaces.

The work is intended to incite inspection on U-Topos, the placelessness and timelessness in spaces from palaeolithic caves where mankind found their first art, to Plato’s cave allegory, to white cube space described by Brian O’Doherty; and also inspection on how each of us perceive the space itself that surrounds us, by stripping surrounding aspects to the perceptual essence of the white walls that frame our perception; like how the box frames the beetle in Wittgenstein’s analogy. Since that it links the worldly rule in all situations where we ‘read’ and ‘write’ diﬀerent realities as we live our lives in our shared space.

Site-specific installation Dimensions variable ≈ 1.496 × 1013 cm. Now, Here and Elsewhere is a site-specific and time-specific project, original counterpart to Here and Now (2019) , to transform the space in BUG Auditorium into an artwork. The spatial installation utilises the existing conditions such as the orientation of the building, the sun shading elements of the room, and natural light, in order to create geometrical/architectural forms, redefining the ways we define spaces.

The walls of sunlight in this project are created from analysis of building orientation and surroundings. In late afternoon in Bangkok, the sunlight direction aligned perfectly to the complex’s grid during the exhibition period.

In this exploration, it can be said that Now, Here and Elsewhere is a performative project where the architecture (which usually frames the art), the surrounding layout of Bangkok University, the celestial bodies, and the audience act together as performers.

Site-specific installation Dimensions variable ≈ 1.496 × 1013 cm. Praisaneeyakan served as the postal museum until it was closed to the public a few years later. It is a life-size extraction of Thailand’s first postal Oﬃce once stood on the site, including only the façade of the original building, educing the depth from 53.5 metres to only 3.5 metres from front to back. There has been a proposed plan to demolish and rebuild the replica with more functional space. There is yet to be a certain public announcement about its future.

The presence of the current Praisaneeyakan is now serving as a monument, a reminiscence to the similar-looking building in the past and its history. The building is bound to face a change in the near future.

Golden Hour is an installation facilitating Praisaneeyakan’s ability to convey a glimpse into the future. It consists of a 4 meter tall mirror placed in front of one of the windows of the façade of the building. The mirror lays on a scaﬀold with an inclination on 68 degrees,

allowing the sunlight to project a light image of the window that it faces that reflects on the opposite side of the hollow building. The light rays in the shape of a window that is yet to be built appears as a mark of the magic moment, the indication of temporal flow, and the beginning of the end of day that leads further towards another beginning. The future window appears in the afternoon and it climbs up as the Sun goes down until being in its prospective placement approximately at 5 pm everyday during the exhibition period.

Outside Outside (Green Monitor), 2019

Site-specific installation Dimensions variable The installation recreate a framed view akin to outlook from a window on the outdoor scenery.

The work can be viewed as a redundancy of a gaze towards outside on top of the already exterior perspective. The site is an unused space from urban sprawl in Metropolitan Bangkok, analogous to stretch marks on bodies occurred along quick expansions.

A square profile beam light is utilised to accentuate and define a frame of observation in an otherwise neglected space. It is a visual intervention that explores an incites explorations of urban elements at night other than billboards and built environments, directing to patches of nature, the urban element of Bangkok which are sought and yet overlooked at the same time.

Video 1 Minute Foundation is an exploration of fundamentality of a video by Sorn Patharakorn consisting primarily of light and time. The video displaysÂ a geometric shadow without a body of object apparent creeping across a grass lawn for the most duration of the video.

In the video, a detached shadow shows little association to object of its origin, hints a little about the source of light, while clinging to the ground, fondling the patch of grass without trampling or pulling a single blade of the vegetation, stretching its corners as it moves and disappear.

The piece is the cover piece outdoor of Bangkok Art and Cultural Centre, inviting the public to visit the exhibition Spectrosynthesis II, which tackles on the sociopolitical issues about LGBTQ lives in Asia.

The following is a descriptive text by Curator Adulaya Hoontrakul.

Other Sheep (Not Of This Fold) - Dissecting the ‘spectrum’, Samak Kosem and Sornrapat Patharakorn display 18 sheep, sacrificial animals that may all appear the same but in fact represent the multitude of gender identities in Thailand.

This installation is an ode to queer Muslim brothers and sisters throughout Southeast Asia, who encounter walls and obstacles in life. They are forced to stay anonymous rather than draw attention to themselves, due to religious condemnation and cultural prejudice.

is a public art project by Titirat Skultantimayta and Sorn

Patharakorn, consisting of a persistent action of writing in front of

The words written on the site are pronounced the same in Thai and German. The definitions of written words are as shown below:

the new Bauhaus Museum with water from remaining Asbach river.

the National Socialists with the construction of Gauforum. Part of it

now flows under the Bauhaus Museum Weimar in vicinity to the former Gauforum.

The work is set in a monumental physical surroundings of Weimar,

the enduring testaments of contrasting ideologies, of Bauhaus and

of National Socialists. The action in this project is aimed to meet these surrounding elements with a momentary monument, resurfacing Asbach, touching gently on the harsh history of the site.

Site-specific installation, in Collaboration with Titirat Skultantimayta Dimensions variable ≈ 1.496 × 1013 cm. A mirror is installed on top of an abandoned Livada lighthouse to reflect sunlight to visitors. Instead of guiding the seafarers at night, this installation leads people on the way to the lighthouse and insists the building’s history and existence during the day.

Cicerone granted the audience at the time the second sun illuminating from the beacon of the lighthouse using the passive energy.

Site-specific installation, in Collaboration with Titirat Skultantimayta 700 × 465 × 315 cm. The triangular space under the lowest flight of stair is sometimes called spandrel, but the whole space, including that under the first landing does not have a specific term to itself, nor does it have a specific function.

The space usually stores things those are borderline between valuable and forgotten items, most of them are not of apparent present use, they might be relics from the old times in waiting for the case that they are prospectively useful again. So the space and what remains in store are associated more to the past and the future, kept away from the sight of present day.

They might eventually be brought back to light, used as they are intended, or disposed after a period of time has proven that their purpose in the household is certainly dead. Some of things in this space might have already slipped out of our cognition, until we are reminded of those we failed to remember we had or known. They

are, in a way, the materialisation of resurfaced memories we thought we had forgotten. The stairs appeared varying the sharpness and brightness, from dark and blurry to bright and clear, similar to memories from our minds’ eyes which can be seen but not touched.

Behind Time was a site-specific mixed media installation by Titirat Skultantimayta and Sornrapat Patharakorn. It comprised of both tangible and intangible materials, namely light, wood, air, and the space itself. It was installed at Project Room, Gallery VER, Bangkok; the former lumber retail which Rirkrit Tiravanija turned into complex of art spaces. The exact room used to be lumber storage and it is now adjacent to gallery VER art storage.

The sculptural piece was made from oﬀ-cuts from suspended lumber retail business of Titirat’s retired grandfather who no longer runs business actively, and neither yet to terminate it.

Sorn Patharakorn (b.1991 Bangkok) is an artist whose practice consists primarily light and spatial installations. With an experience as an architect, his area of focuses has foundation in phenomenology and architectural studies, imposed with ontological queries. Patharakorn aims to investigate the relationship between objectivity and subjectivities which form our social truths through the ties of abstract, immaterial forms of spaces defined by his works and contexts in which they are situated.