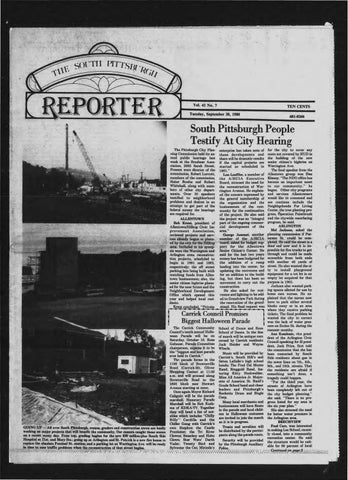 ·. Professional Servic~ At A Reasonablefee~ ,:..

Street in Mt. Washington between the hours of 4:00 p.m. to 7:00 p.m. , . Immunizations against seven potentially crippling or fatal childhood diseases will be · provided - · Measles, Mumps, Rubella, (German Measles), Diphtheria, Pertussis, (Whooping Cough), Tetanus (Lockjaw) and Polio. Parents are urged to bring their children&#39;s immuniza. tion records to the clinic. .. Children under ·18 years old must ·be accompanied by an a~ult: The Immunizatio~ Cijnic will , be conduct.ed by . ,Allegheny ·County Hea,lth Deparbnent in cooperation with -the Healtb Education Committee, Mt~ Was~ ton-Duquesne Heights Com· munity Council ,.+111

THIS : MEANS ,THAT ANY &#39; ZENITH COLOR TV PURCHASED AT LIST PRICE Will NOT COST YOU ONE PENNY IN LABOR FOR AS LONG AS YOU OWN-THE SET! &#39;

every Pennsylvanian,&quot; said Romanelli. The senator is intervening, as a friend of the court, in the federal district court suit, which means he can file briefs now that all evidence in the case has been presented. &quot;If that fails to achieve my results, then · the bill I in· troduced will,&quot; Romanelli explained. Trucking industry officials contend that the Pennsylvania inspection requirement is unnecessary because of federal safety requirements. But Romanelli charges that because many trucks slip through the federal in· spection system the state law is essential. &quot;In Pittsburgh this summer an overweiJlht tnick

with faulty brakes killed four people and an unborn child,&quot; he said. &quot;Obviously the federal regulations didn&#39;t keep that truck off the streets.&quot; Romanelli, long an advocate of stricter safety standards and an opponent of higher truck weights, said he is appalled at the trucking industry&#39;s lack of conscience and its irresponsibility. &quot;Shabbily maintained trucks are a threat to every person in Pennsylvania. Those five people killed in Pittsburgh were standing on a corner on a downtown street. They weren&#39;t even on a highway,&quot; Romanelli said. &quot;I am intent on preventing a recurrence of this tragedy. I am determined to make the trucking industry • respect the law.&quot;

If you have rental property in , the· City of Pittsburgh that. needs ~led,. call u~ for: details.on the money avaUable,to 1you,through the ,Caty Grant Programs. . . · , Raise you~ rerts &#39;. arid P,roperty vqlues at very little cost · to you/ Also. call for ·an City Wome Locin Program information and estimates: &#39; ·

ness and the advantages and funds will be made for can· disadvantages of its use will celled reservations after Oct. be discussed On Nov. 20, the 16. workshop will focus on appli· For a registration form or cation of assertivenes·s more information, contact principles. · Marjorie P; Kerlin, coordina• Continuing Education tor, continuing ·education, Certificates will be awarded Duquesne University School by .uu .....,·quesne • um·ver 81·ty at of Nursing, (412) 434-6451. the completion of the workshop: P.N.A. approval is .

Pennsylvania law requiring inspections e.i~her from Pen• nsylvania oi:: another state. The inspection . requirement was part of a law pass· ed this year by the General Assembly which also granted the industry an in· creased weight limit. &quot;The trucking industry is reneging on its part of the agreement, at the expense of the safety and well-being of

Se n at or J am es .A . Romanelli (D-Allegheny) has introduced legislation to. reduce the maximum truck weight from 80,000 pounds to , 73,·280 pounds, until tlie · tru,c!rlng industry agrees ro adhere to new inspectioQ. requirements. Romanelli recently in· tervened in a trucking industry suit which see~s to have declared unconstitu· tional a provision of the new

Cubs Plan Flea Market . There will be a flea market sponsored by Cub Scout ·Pack 555 on Saturday, Oct. 11 from 10. a.m. until 3 p.m. in the parking lot of First Federal Savings and .Loan of Mt. Oliver, Penn and Hays &#39;avenues. The pack is soliciting donations of items which can be sold that day. For further information or pick up, phone Debbie Miller, 431-4617.

SEATING FOR OVER 200 - RESERVE NOW - FULL v AIR CONDITIONED&quot;YOUR CATERER OR OURS &quot;

The Mt. Oliver Indians lost their second straight game of the 1980 season to the Greenfield Cougars 20-6. After a scoreless first quarter, a booming 60-yard punt by Greenfield put Mt. Oliver in the hole on their own 30 yard line. Mt. Oliver lost 7 yards in four plays and Greenfield took over on the Indian 23 yard line. Indian Tony Visco sacked the Greenfield· Quarterback for a 15 yard loss but Greenfield scored on a 38 yard run to make the score 6•0. The Cougars took advantage of an interference penalty against Mt. Oliver on a fourth and 22 Rituation which set up a 4-yard run by Laird &#39;for &#39;t he score. The conversion was good and Greenfield took 14-0 lead at the first half. , The Cougars scored their last touchdown on a flaaflicker play and Mt. Oliver averted a shutout when Dan Prokop&#39;s 64 yard run set up a 10-yard touchdown by Jeff · Repasky. Mt. Oliver&#39;s Mike Davis . led the defense with ten tackles and one fumble recovery. i&#39;he Indians record is now 0 wins and 2 losses and one tie. . . In a battle of undefeated teams, the Mt. Oliver Mites

their Greenfield counterparts and trounced them 22·0 for their .second straight shutout. The Indians had 239 yards rushing and averaged 11.9 yards per rush as Don Rosenfeld and Rick Bubash ran fo~ 130 an 101 yards respect1ve_ly. Mt. Oliver thought they had an early 6-0 lead but Rick Bubash&#39;s 15 yard touchdown was nullified by a clip. Greenfield held but fumbled on their next possession and Don Rosenfeld fell on the loose ball at the Cougar 10. . Rosenfeld then took a handofffromQBMatt~ervosh and ran 10 yard_s for the initial score and Rick Bubash ran the conversion for an 8-0 lead at the en4 . of tlie first quarter. In the second quarter, Mt. Oliver drove 63 yards in only 3 plays as Rick Bubash streaked 48 yards to make the 14-0 at the half. In the third quarter, Mt. Oliver was caught holding which took them back to their own 18 yard line. Don Rosenfeld took care of that situation as he galloped 82 yards for a touchdown and Doug Higgins caught the conversion pass from Rick Bubash for a 22-0 win. .

You don&#39;t have to wait six months Of even three months to earn interest on savings as you must at most banks in Pittsburgh, With continuous compounding you can start earning inter,est on your interest from the day you make your first deposit at Sol&#39;lh Pittsburgh Savings. And Squth,Pitlsburgh Savings pays ¼% more interest on savings plans than most banks pay, Continuous compounding plus¼% more Interest positively adds up to the best insured savings plans available in Pittsburgh.

FREE ESTIMATES · All wo,1 GUARANTEID

FREE CONSULTATiON TO DISCUSS YOUR NEEDS

A priest of the Pittsburgh Catholic Diocese who has been serving as s missionary in South America for three years, will be the principal speaker at the 15th annual Founders&#39; Day Dinner Thursday, Oct. 23, in the William Penn Hotel. Fr. Thomas E. KredeL well known in the South Hills area where he began hjs priesthood and served for five years as an assistant pastor at St. Thomas ~fore Church in Bethel Park, will address the dinner. , He is currently on assignment in Negritos, Peru, in the service of the Society of St. James the Apostle. He has been in South America since 1977. The $100-a-plate Founders&#39; Day Dinner is held annually as a benefit for Pittsburgh diocesan priests and Religious Sisters of the Mercy Order who work in South American mission assignments. James J. Ferry, and Andrew F. Goyette· are co-chairmen of the dinner. Tickets are available at the . D1ocesan Mission Office, 111 Blvd. of the Allies, Pitts· burgh 15222. ·

workShop A•I dS Ad •v e p arents _ opt1_ How do parents open the doors with adoptive children to discuss deeper adoption matters? Adoption Together · an opport um·tY work s hop is for parents to be acquainted with language and issues

that bother youth. New material developed here in Pittsburgh will be presented for the .firS t time to P.llrents. Families can then discuss it at home and evaluate it. At the workshop, one will have an opportunity to understand the turmoil in _an adoptee that keeps hidden by

Brashear Co-op Accepts Me_mhers The Brashear Food Co-op • is now accepting ~ember· ships for the program which offers fresh food at reduced prices to those who are members. The co-op functions on Wednesdays from 9:30· a.m. until 12:ao p.m. at Brashear Center, 2005 Sarah St. For more ~ormation, call 431-2236.