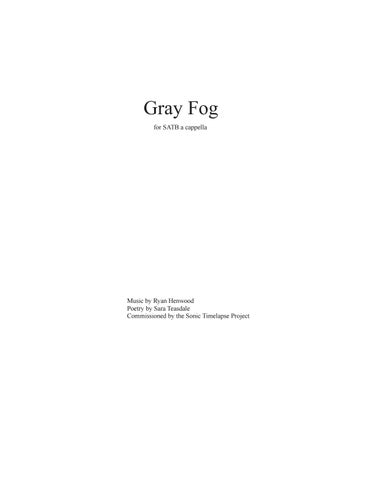 Gray Fog for SATB a cappella

Gray Fog A fog drifts in, the heavy laden Cold white ghost of the sea One by one the hills go out, The road and the pepper-tree. I watch the fog float in at the window With the whole world gone blind, Everything, even my longing, drowses, Even the thoughts in my mind. I put my head on my hands before me, There is nothing left to be done or said, There is nothing to hope for, I am tired, And heavy as the dead.

Notes from the Composer: Commissioned by the Sonic Timelapse Project, Gray Fog was written with hopes of capturing the sense of heaviness brought on by the pandemic. Upon reading Sara Teasdale&#39;s poem, Gray Fog, I felt an immediate connection to the emotions captured in her writing, specifically a looming sense of dread as you watch the fog roll in from inside your home. Compositionally, I hoped to reflect this by employing long sustained notes and a harmonic language that embraces the &quot;fogginess&quot; of dissonance. The piece ends with an extended lament, repeating the text, &quot;I am tired, and heavy as the dead&quot;.

Performance Notes: The piece concludes with a melodic line that descends to a low D for the bass II section. If the low D is inacessible to your basses, there are two options to avoid this. First, the line could be repeated in the same octave as it was sung by the Bass I section in mm. 54-58. Alternatively, the repetition could be omitted completely and the fermata and double barlines moved to m. 58.

Commissioned by the Sonic Timelapse Project

Gray Fog for SATB a cappella

* If the low D at the end is inaccessible for your Bass section, the line may be repeated in the higher octave or the fermata and double bar lines can be moved to m.58. 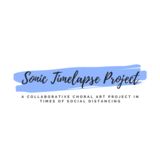