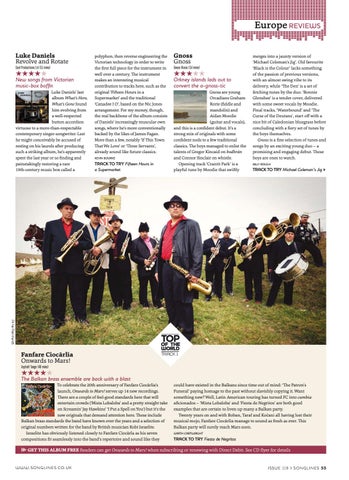 New songs from Victorian music-box boffin Luke Daniels’ last album What’s Here, What’s Gone found him evolving from a well-respected button accordion virtuoso to a more-than-respectable contemporary singer-songwriter. Lest he might conceivably be accused of resting on his laurels after producing such a striking album, he’s apparently spent the last year or so finding and painstakingly restoring a rare 19th-century music box called a

polyphon, then reverse engineering the Victorian technology in order to write the first full piece for the instrument in well over a century. The instrument makes an interesting musical contribution to tracks here, such as the original ‘Fifteen Hours in a Supermarket’ and the traditional ‘Canadee I O’, based on the Nic Jones arrangement. For my money, though, the real backbone of the album consists of Daniels’ increasingly muscular own songs, where he’s more conventionally backed by the likes of James Fagan. More than a few, notably ‘If This Town That We Love’ or ‘Three Servants’, already sound like future classics. KEVIN BOURKE

TRACK TO TRY Fifteen Hours in a Supermarket

Orkney islands lads out to convert the a-gnoss-tic Gnoss are young Orcadians Graham Rorie (fiddle and mandolin) and Aidan Moodie (guitar and vocals), and this is a confident debut. It’s a strong mix of originals with some confident nods to a few traditional classics. The boys managed to enlist the talents of Gregor Kincaid on bodhrán and Connor Sinclair on whistle. Opening track ‘Crantit Park’ is a playful tune by Moodie that swiftly

merges into a jaunty version of ‘Michael Coleman’s Jig’. Old favourite ‘Black is the Colour’ lacks something of the passion of previous versions, with an almost swing vibe to its delivery, while ‘The Den’ is a set of fetching tunes by the duo. ‘Bonnie Glenshee’ is a tender cover, delivered with some sweet vocals by Moodie. Final tracks, ‘Waterbound’ and ‘The Curse of the Deutans’, start off with a nice bit of Caledonian bluegrass before concluding with a fiery set of tunes by the boys themselves. Gnoss is a fine selection of tunes and songs by an exciting young duo – a promising and engaging debut. These boys are ones to watch. BILLY ROUGH

OF THE WORLD TRACK 1

The Balkan brass ensemble are back with a blast To celebrate the 20th anniversary of Fanfare Ciocărlia’s launch, Onwards to Mars! serves up 14 new recordings. There are a couple of feel-good standards here that will entertain crowds (‘Mista Lobaloba’ and a pretty straight take on Screamin’ Jay Hawkins’ ‘I Put a Spell on You’) but it’s the new originals that demand attention here. These include Balkan brass standards the band have known over the years and a selection of original numbers written for the band by British musician Kobi Israelite. Israelite has obviously listened closely to Fanfare Ciocărla as his seven compositions fit seamlessly into the band’s repertoire and sound like they

could have existed in the Balkans since time out of mind: ‘The Patron’s Funeral’ paying homage to the past without slavishly copying it. Want something new? Well, Latin American touring has turned FC into cumbia aficionados – ‘Mista Lobaloba’ and ‘Fiesta de Negritos’ are both good examples that are certain to liven up many a Balkan party. Twenty years on and with Boban, Taraf and Kočani all having lost their musical mojo, Fanfare Ciocărlia manage to sound as fresh as ever. This Balkan party will surely reach Mars soon. GARTH CARTWRIGHT

GET THIS ALBUM FREE Readers can get Onwards to Mars! when subscribing or renewing with Direct Debit. See CD flyer for details 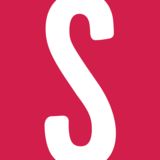