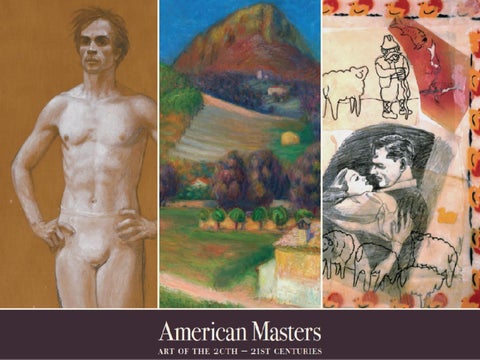 During the last 120 years the Wyeth family created an astounding dynasty of American painters. After N.C. Wyeth began his tutorage with Howard Pyle in 1900, N.C. taught his son Andrew, who in turn taught his son, Jamie, developing an amazing family schooled in the tradition and skills of art passed from one generation to the next. They emerged as internationally esteemed American artists in the realist/ representational tradition. As they created masterpieces, a concurrent art tradition was developing another trajectory for American art. Somerville Manning Gallery's exhibition of American Masters paintings places the Wyeth family in the milieu of the art of their times. When the 1913 Armory Show in New York exposed America to European Modernism, a new ethos began to emerge as artists experimented with shapes, line, forms and colors that did not create a direct representation of their subject. This transformation continued through the Depression and the advent of World War II, which brought the artists, poets, musicians, writers, psychologists, scientists, and intellectuals to New York to escape persecution in Nazi occupied Europe. Hans Hofmann brought not only his art and ideas from Germany in 1930, but influenced an entire generation of American artists with his teaching and schools. Included in this exhibition are works by artists Arshile Gorky, Red Grooms, Helen Frankenthaler, and Wolf Kahn, all of whom either studied or associated with Hofmann. His work and influence typifies the artistic transformation that affected so many American artists. This exhibition takes you on a journey with the Wyeths and explores the art world surrounding them in a tumultuous century of metamorphosis. American Masters juxtaposes the solidity of the Wyeth creative genius, alongside other representational artists such as William Glackens, Rae Sloan Bredin, Thomas Hart Benton, Leon Kroll and Fairfield Porter, in contrast to those artists that lead a path to American nonobjective painting. Victoria L. Manning

While some of Bentonâ&#x20AC;&#x2122;s drawings were used as studies for his oils and mural decorations, others were conceived as independent works of art. Inspired by his travels through the Midwest and the South, he depicted the people and scenery of rural America - such is the case with Going to Church.

Intent on creating dramatic and emotional works, Bluemner used bold colors in daring combinations and forms to evoke mood. As a color theorist, Bluemner was interested in how pure color carried emotional and psychological impact.

This work is part of a 62-book series in which Frankenthaler painted the covers of books about her work, as a substitute for a traditional first-edition run. Thirty of the painted book (including this painting) were exhibited together as part of a show at the Metropolitan Museum of Art in New York in 1973.

The Glackens family spent much time in the late 1920s living in France. The winter of 1925 was spent in the south, in Vence where this painting was completed. Provenance The estate of the artist

In 1937, Gropper traveled west on a Guggenheim Fellowship and visited the Dust Bowl and the Hoover and Grand Coulee Dams, sketching studies for a series of paintings and a mural he painted for the Department of the Interior in Washington, DC. That same year he had paintings purchased by both the Metropolitan Museum of Art and the Museum of Modern Art.

â&#x20AC;&#x153;Al Held was one of the last and best of the big impact Abstract painters to emerge from the postWar era.â&#x20AC;? - Ken Johnson, New York Times Art Critic

Provenance The Estate of Hans Hofmann

Beginning with his 1972 painting Untitled, Johns developed his motif of crosshatched lines in increasingly complex systems, experimenting with colors, patterns, mirroring and reversals. Over the next ten years, Johns produced many variations on the theme in both paintings and prints.

Wolf Kahn, who will be remembered for his luminous, color-saturated landscapes, passed away on March 15, 2020, a few months after his wife the painter Emily Mason predeceased him on December 10, 2019.

Exhibited Monhegan Historical & Cultural Museum, Monhegan, ME, Side by Side on Monhegan: The Henri Circle and American Impressionists, July 1 - September 20, 2004 Literature Leon Kroll; A Spoken Memoir by Fredson Bowers and Nancy Hale, pl. 31 (as Maine Rocks and Sea, 1913) University of Virginia Press

â&#x20AC;&#x153;Mason works within the improvisational model of Abstract Expressionism, though notably without angst or bravado.â&#x20AC;? - Robert Berlind, Art in America

Helene Bok was married to Cary Bok, the son of Mary Louise Curtis Bok, founder of the Curtis Institute of Music in Philadelphia, PA

Similar work of note: Joseph Stella Song of the Nightingale, 1918 Collection of the Museum of Modern Art, NY

The carriage house/studio in June 1910, in a photo probably taken by N. C. Wyeth.

''I did not paint him because he was a great ballet dancer,'' Mr. Wyeth said. ''I thought he was extraordinary-looking. He just had this magnetism, this amazing presence.''

â&#x20AC;&#x153;Every artist throughout history has expressed himself through a life motif. I have chosen the mother and child . . . [this composition] is the embodiment and expression of the love of man for his family . . .â&#x20AC;? William Zorach, Art is My Life, 1967 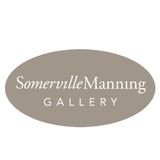 Somerville Manning Gallery is pleased to announce the American Masters – Art of the 20th – 21st Centuries exhibition on view from March 27 –...

Somerville Manning Gallery is pleased to announce the American Masters – Art of the 20th – 21st Centuries exhibition on view from March 27 –...