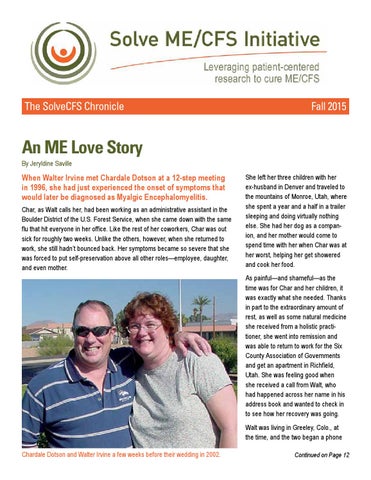 An ME Love Story By Jeryldine Saville

When Walter Irvine met Chardale Dotson at a 12-step meeting in 1996, she had just experienced the onset of symptoms that would later be diagnosed as Myalgic Encephalomyelitis. Char, as Walt calls her, had been working as an administrative assistant in the Boulder District of the U.S. Forest Service, when she came down with the same flu that hit everyone in her office. Like the rest of her coworkers, Char was out sick for roughly two weeks. Unlike the others, however, when she returned to work, she still hadn’t bounced back. Her symptoms became so severe that she was forced to put self-preservation above all other roles—employee, daughter, and even mother.

She left her three children with her ex-husband in Denver and traveled to the mountains of Monroe, Utah, where she spent a year and a half in a trailer sleeping and doing virtually nothing else. She had her dog as a companion, and her mother would come to spend time with her when Char was at her worst, helping her get showered and cook her food. As painful—and shameful—as the time was for Char and her children, it was exactly what she needed. Thanks in part to the extraordinary amount of rest, as well as some natural medicine she received from a holistic practitioner, she went into remission and was able to return to work for the Six County Association of Governments and get an apartment in Richfield, Utah. She was feeling good when she received a call from Walt, who had happened across her name in his address book and wanted to check in to see how her recovery was going. Walt was living in Greeley, Colo., at the time, and the two began a phone

Chardale Dotson and Walter Irvine a few weeks before their wedding in 2002. 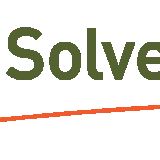