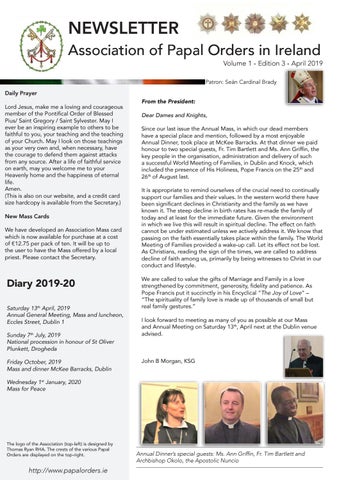 Patron: Seán Cardinal Brady Daily Prayer Lord Jesus, make me a loving and courageous member of the Pontifical Order of Blessed Pius/ Saint Gregory / Saint Sylvester. May I ever be an inspiring example to others to be faithful to you, your teaching and the teaching of your Church. May I look on those teachings as your very own and, when necessary, have the courage to defend them against attacks from any source. After a life of faithful service on earth, may you welcome me to your Heavenly home and the happiness of eternal life. Amen. (This is also on our website, and a credit card size hardcopy is available from the Secretary.) New Mass Cards We have developed an Association Mass card which is now available for purchase at a cost of €12.75 per pack of ten. It will be up to the user to have the Mass offered by a local priest. Please contact the Secretary.

From the President: Dear Dames and Knights, Since our last issue the Annual Mass, in which our dead members have a special place and mention, followed by a most enjoyable Annual Dinner, took place at McKee Barracks. At that dinner we paid honour to two special guests, Fr. Tim Bartlett and Ms. Ann Griffin, the key people in the organisation, administration and delivery of such a successful World Meeting of Families, in Dublin and Knock, which included the presence of His Holiness, Pope Francis on the 25th and 26th of August last. It is appropriate to remind ourselves of the crucial need to continually support our families and their values. In the western world there have been significant declines in Christianity and the family as we have known it. The steep decline in birth rates has re-made the family of today and at least for the immediate future. Given the environment in which we live this will result in spiritual decline. The effect on faith cannot be under estimated unless we actively address it. We know that passing on the faith essentially takes place within the family. The World Meeting of Families provided a wake-up call. Let its effect not be lost. As Christians, reading the sign of the times, we are called to address decline of faith among us, primarily by being witnesses to Christ in our conduct and lifestyle. We are called to value the gifts of Marriage and Family in a love strengthened by commitment, generosity, fidelity and patience. As Pope Francis put it succinctly in his Encyclical “The Joy of Love” – “The spirituality of family love is made up of thousands of small but real family gestures.” I look forward to meeting as many of you as possible at our Mass and Annual Meeting on Saturday 13th, April next at the Dublin venue advised.

Frank Duff KC*SG Papal Knight and Legionary Among the outstanding Papal Knights and Dames, Francis Michael &quot;Frank&quot; Duff KC*SG (7 June 1889 – 7 November 1980) is known to all. As a member of the Society of St. Vincent de Paul, Frank was greatly influenced by the spirit of the Society and gradually came to have a great love for the poor and underprivileged in whom, as in everybody he met, recognised and honoured Christ. One of the strongest convictions of his life was that without exception, all are called to be saints and through our Catholic faith we have available the means necessary to attain this. His deep spiritual faith in Mary Our Mother was the catalyst in setting up the first branch of the Legion of Mary in September 1921. Today the Legion of Mary is found in about 170 countries, and numbers more than three million members and many more auxiliary members. In his understanding of the Blessed Virgin in the plan of redemption, Mary fulfils faithfully the office which Jesus has committed to her. Subject to Him she is also most perfectly united to Him. She is fully Mother and everything connected with the children of God is placed under her influence. She has not any jurisdiction independent of His; she is totally dependent on Him. But neither is she a mere mechanism; she is a responsible co-operator with His Will. Everything comes from the Father and everything returns to the Father and Mary is at the heart of this. When someone has once found Mary, and through Mary, Jesus and God the Father, he has found all that is good … all of God’s grace and friendship, all truth against lies, all sweetness and joy in the challenges of life. It is through Mary we must approach God and unite ourselves perfectly and strictly to his Majesty, without fear of rejection. We pray that one day Francis Michael &quot;Frank&quot; Duff KC*SG is declared a saint by the Catholic Church and hope for the day that we too, by following his example and the example of Mary may one day be listed among the saints. In July 1996 the cause of his canonization was introduced by the Archbishop of Dublin, Cardinal Desmond Connell. Rt. Rev’d Msgr Eoin Thynne

Prayer for the Beatification of the Servant of God Frank Duff God our Father, You inspired your servant Frank Duff with a profound insight into the mystery of your Church, the Body of Christ, and of the place of Mary the Mother of Jesus in this mystery. In his immense desire to share this insight with others and in filial dependence on Mary he formed her Legion to be a sign of her maternal love for the world and a means of enlisting all her children in the Church’s evangelizing work. We thank you Father for the graces conferred on him and for the benefits accruing to the Church from his courageous and shining faith. With confidence we beg you that through his intercession you grant the petition we lay before you. We ask too that if it be in accordance with your will, the holiness of his life may be acknowledged by the Church for the glory of your Name, through Christ Our Lord, Amen. http://www.papalorders.ie

Association of Papal Orders in Ireland: Mass for Persecuted Christians under a tapestry of St.Luke

Our website http://papalorders.ie is reaching a global audience and attract interest from many countries (highlighted in blue below).

Knight of St. Gregory, (14 September 2005) April 1930 - November 30th 2018. He was born in Lee, Portarlington, Co. Laois. During his career, he was an administrator with Bord na Móna, Portarlington, 19471949. Subsequently he became a senior executive with Munster &amp; Leinster Bank, Ltd. 1949-1969. General manager Allied Irish Banks, Ltd., 1970-1981 Master of Science in Management, University Dublin. Master Management, Irish Management Institute, Dublin. Director development Maynooth Pontifical University, 19811991. He worked closely with Tomás Cardinal O Fiaích on fundraising for St Patrick’s College, Maynooth. He was author of The Institute of Bankers Handbook on lending which was used by those studying for their Banking Diploma. Loughlin was greatly interested in history and especially that of the Sweeney Clan. Counsellor and chairman Catholic Marriage Council, 1964-1978. He married Dame Mary O’Mahony and they had four children. Loughlin was a member of the Equestrian Order of the Holy Sepulchre of Jerusalem and was Chancellor of the Irish Lieutenancy.

First Secretary Embassy to the Holy See in the late 1960’s. Died in Montpellier and formerly lived in Dublin and Brussels. January 30, 2019 beloved husband of Marie-Francoise (Fanou), dearly loved father of Lara and Alexis and adored grandfather of Albane, Cassien and Aymeric, dear brother of Hylda Williamson and father-in-law of Arnaud Burin des Roziers. Sadly missed by his family and many friends. Funeral has taken place in Montpellier.

Knight Commander of St. Gregory (29 March 1996) 1937 - 7 Dec. 2018. Born in Cork and Engineer with ESB since November 1962 after returning to Ireland from Newcastle upon Tyne where he worked with a major engineering firm in the electrical network equipment sector. He lived in Mullingar. Supreme Knight (1993 – 1996) and Secretary of St. Columbanus. Served in the Sudan with ESB International. Educated by CBS and in Castleknock College. Chairman of the Midland Region of the ESB Vocational Group, Rotary, Mullingar Transport Museum. President of Mullingar Chamber of Commerce, member of the Irish Institute of Engineers. Father of 6, married to Bette née Collins for 56 years. Msgr Thynne has celebrated Mass for the repose of their souls. 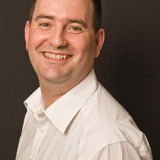