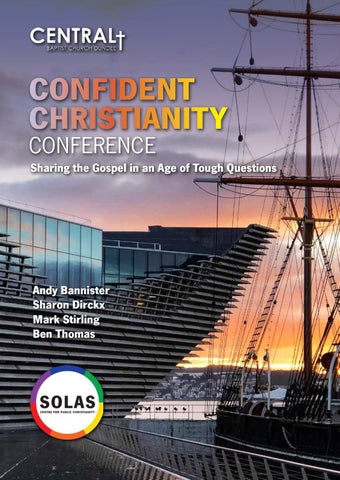 Sharing the Gospel in an Age of Tough Questions

Timetable 9:15 Welcome 9:25 Jim Turrent Morning Devotion - Romans 1:16 9:35 Andy Bannister How to talk about Jesus without looking like an idiot 10:05 Sharon Dirckx Am I Just My Brain? 11:15 Mark Stirling Everyone Believes in Something 11:40 10ofThose book reviews 11:55 Ben Thomas Sex &amp; Salvation: a Personal Story of Transformation 12:20 Lunch 13:25 Andy Bannister Are We Matter or Do We Matter? 13:55 Ben Thomas Sharing the Gospel With LGBT Friends and Family 14:25 Q&amp;A** 15:30 Mark Stirling Can I disagree without being disagreeable? 16:00 Sharon Dirckx If God, Then Why Suffering? 16:25 Finish **Q&amp;A: Submit questions for the Q&amp;A session at the Solas table, or text your question to: 07592728305 Thanks to 10ofThose.com for providing the bookstall at our conference today. Please visit their table for a selection of great Christian resources.

Speakers Jim Turrent is lead pastor at Central Baptist Church. Jim came into pastoral ministry after a career in engineering. He served in Culloden Baptist Church for 10 years before coming to Central Baptist. He is married to Janey who is a teacher and they have a son, Alasdair. Andy Bannister (Solas Centre for Public Christianity) was Director and Lead Apologist at the Canada office of Ravi Zacharias International Ministries (RZIM) prior to joining Solas in September 2016. Andy holds a PhD in Islamic studies and his latest book, The Atheist Who Didnâ&amp;#x20AC;&amp;#x2122;t Exist, is a humorous engagement with the New Atheism. When not traveling, speaking, or writing, Andy is a keen hiker, mountain climber, and photographer. He is married to Astrid; they have two children, Caitriona and Christopher. Sharon Dirckx (RZIM) is a Senior Tutor at the Oxford Centre for Christian Apologetics (OCCA) and an RZIM Apologist. Originally from a scientific background, she has a Ph.D. in brain imaging from the University of Cambridge and has held research positions at the University of Oxford and the Medical College of Wisconsin, USA. Sharon has also appeared on BBC Songs of Praise, Unbelievable? with Justin Brierley on Premier Christian Radio, BBC Radio 2 Good Morning Sunday with Clare Balding and BBC Radio 4 Beyond Belief. Sharon lives in Oxford with her husband and two young children. Mark Stirling (Cornerstone Church, St Andrews) is a former medical doctor who pioneered work amongst university students with the Navigators in Edinburgh from 1998 to 2004. He has a PhD in Biblical Studies from St Andrews University, his thesis examining issues of discipleship and maturity in Ephesians. He and his wife Jenny still live in St Andrews where they work closely together in The Chalmers Institute, a learning community that exists to resource and equip men and women to exercise faithful biblical leadership in the church and in society. Ben Thomas is a Consultant in Neuro-Intensive Care Medicine and Anaesthesia at University Hospital Southampton. He has been a Christian since 2010 and in 2012-13 he took a year out to train at OCCA. His particular interests are: sexuality and gender, medical ethics and evangelism in the workplace. Outside of work, he loves running &amp; keeping fit, photography, gardening, cooking and seeing friends and family!

Stand with us. Support the work of evangelism through Solas Centre for Public Christianity. Get a free copy of Why We (Still) Believe when you give just ÂŁ3 per month or more. www.solas-cpc.org/book-offer/ 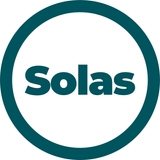