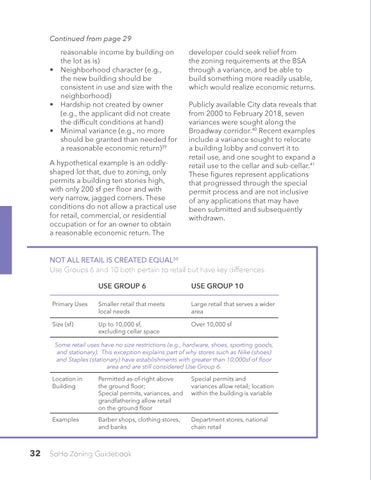 Continued from page 29 reasonable income by building on the lot as is) • Neighborhood character (e.g., the new building should be consistent in use and size with the neighborhood) • Hardship not created by owner (e.g., the applicant did not create the difficult conditions at hand) • Minimal variance (e.g., no more should be granted than needed for a reasonable economic return)39 A hypothetical example is an oddlyshaped lot that, due to zoning, only permits a building ten stories high, with only 200 sf per floor and with very narrow, jagged corners. These conditions do not allow a practical use for retail, commercial, or residential occupation or for an owner to obtain a reasonable economic return. The

developer could seek relief from the zoning requirements at the BSA through a variance, and be able to build something more readily usable, which would realize economic returns. Publicly available City data reveals that from 2000 to February 2018, seven variances were sought along the Broadway corridor.40 Recent examples include a variance sought to relocate a building lobby and convert it to retail use, and one sought to expand a retail use to the cellar and sub-cellar.41 These figures represent applications that progressed through the special permit process and are not inclusive of any applications that may have been submitted and subsequently withdrawn.

NOT ALL RETAIL IS CREATED EQUAL50 Use Groups 6 and 10 both pertain to retail but have key differences. USE GROUP 6

Some retail uses have no size restrictions (e.g., hardware, shoes, sporting goods, and stationary). This exception explains part of why stores such as Nike (shoes) and Staples (stationary) have establishments with greater than 10,000sf of floor area and are still considered Use Group 6.

Special permits and variances allow retail; location within the building is variable