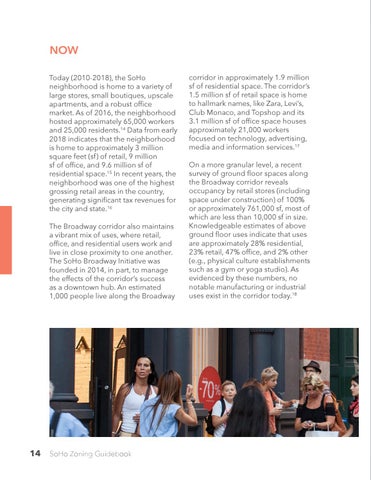 NOW Today (2010-2018), the SoHo neighborhood is home to a variety of large stores, small boutiques, upscale apartments, and a robust office market. As of 2016, the neighborhood hosted approximately 65,000 workers and 25,000 residents.14 Data from early 2018 indicates that the neighborhood is home to approximately 3 million square feet (sf) of retail, 9 million sf of office, and 9.6 million sf of residential space.15 In recent years, the neighborhood was one of the highest grossing retail areas in the country, generating significant tax revenues for the city and state.16 The Broadway corridor also maintains a vibrant mix of uses, where retail, office, and residential users work and live in close proximity to one another. The SoHo Broadway Initiative was founded in 2014, in part, to manage the effects of the corridor’s success as a downtown hub. An estimated 1,000 people live along the Broadway

corridor in approximately 1.9 million sf of residential space. The corridor’s 1.5 million sf of retail space is home to hallmark names, like Zara, Levi’s, Club Monaco, and Topshop and its 3.1 million sf of office space houses approximately 21,000 workers focused on technology, advertising, media and information services.17 On a more granular level, a recent survey of ground floor spaces along the Broadway corridor reveals occupancy by retail stores (including space under construction) of 100% or approximately 761,000 sf, most of which are less than 10,000 sf in size. Knowledgeable estimates of above ground floor uses indicate that uses are approximately 28% residential, 23% retail, 47% office, and 2% other (e.g., physical culture establishments such as a gym or yoga studio). As evidenced by these numbers, no notable manufacturing or industrial uses exist in the corridor today.18