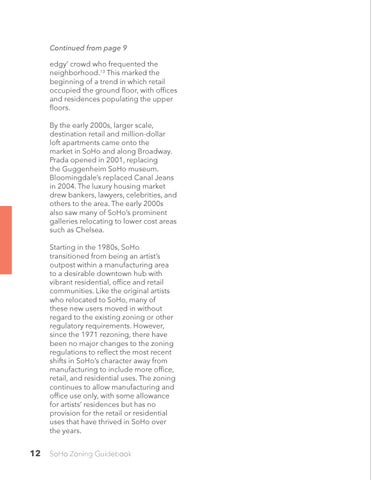 Continued from page 9 edgy’ crowd who frequented the neighborhood.13 This marked the beginning of a trend in which retail occupied the ground floor, with offices and residences populating the upper floors. By the early 2000s, larger scale, destination retail and million-dollar loft apartments came onto the market in SoHo and along Broadway. Prada opened in 2001, replacing the Guggenheim SoHo museum. Bloomingdale’s replaced Canal Jeans in 2004. The luxury housing market drew bankers, lawyers, celebrities, and others to the area. The early 2000s also saw many of SoHo’s prominent galleries relocating to lower cost areas such as Chelsea. Starting in the 1980s, SoHo transitioned from being an artist’s outpost within a manufacturing area to a desirable downtown hub with vibrant residential, office and retail communities. Like the original artists who relocated to SoHo, many of these new users moved in without regard to the existing zoning or other regulatory requirements. However, since the 1971 rezoning, there have been no major changes to the zoning regulations to reflect the most recent shifts in SoHo’s character away from manufacturing to include more office, retail, and residential uses. The zoning continues to allow manufacturing and office use only, with some allowance for artists’ residences but has no provision for the retail or residential uses that have thrived in SoHo over the years.