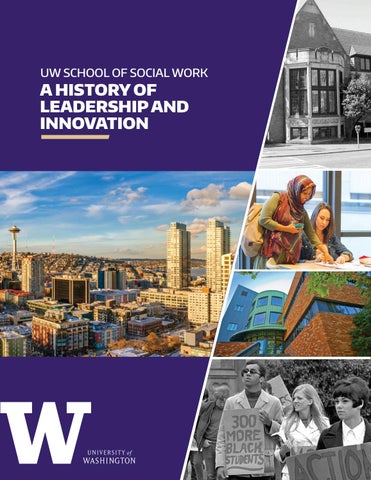 A HISTORY OF LEADERSHIP AND INNOVATION

The School of Social Work is a nationally recognized leader in social change education, research, and service. Our leadership role in the profession did not happen overnight: For nearly a century, innovation has been at the core of our mission to bring the best in social work science and practice to the most pressing social challenges of our times.

Early years of leadership establish a strong course The first formal social work training in Washington state was offered in 1918 through a UW Department of Sociology course. Funded by the Red Cross, the class trained caseworkers in providing home services to families of servicemen returning from World War I.

Over the next 15 years, the program expanded, becoming a division of the Department of Sociology and offering a full range of social work courses. Several of those instructors would become leading social work educators, including Arlien Johnson, Marion Hathway, and Mildred Mudgett.

Ernest Witte was named director of the School. He expanded the curriculum, adopted a two-year masterâ&amp;#x20AC;&amp;#x2122;s degree program, and offered fieldwork experiences in community planning, juvenile justice, child welfare, and public administration. During World War II, as faculty and students mobilized for the war effort, the Red Cross designated the UW as a key training center, and the School shifted its emphasis from public welfare to war-related services and medical social work. Acting Director Grace Beals Ferguson was an important figure in this transition.

By 1934, at the height of the Great Depression, the state unemployment rate hit 26 percent. Responding to the critical need for public agency social workers and administrators, the UW established a graduate School of Social Work with funding from the Washington State Emergency Relief Association. Arlien Johnson was selected to direct the program. In 1935, the School became an independent graduate program, and within three years, more than half of the county welfare administrators were former students at the School. In 1939,

Shantytown for the homeless, Seattle (1937)

National prominence grows after World War II After World War II, the School established social work departments in leading Seattlearea hospitals. In 1951, Victor Howery became director, with a mandate to refocus the School, rebuild connections with local welfare agencies and national organizations, and build a stronger research base. As enrollment grew, a Spokane branch program opened and the School became a regional leader in social work education. In 1955, the School moved into Social Work Hall—its first dedicated building— and in 1958 it was designated as an independent professional school. Howery was named its first dean. Several faculty members with doctoral degrees were recruited, including Henry Maier, Florence Stier, and Cal Takagi. An undergraduate program was established in 1959. By 1960, the School had become the eighth-largest social work school in the nation. The Spokane program—a precursor to the social work program at Eastern Washington University—trained 125 master’s-level graduates during the next decade. Charles Brink assumed the deanship in 1963, continuing an Henry Maier era of expansion and increased national prominence. The School established the Center for Social Welfare Research and became the first social work school in the country to offer a specialization in aging. Faculty diversity and doctoral credentials increased.

The 1960s saw the emergence of the Organization of Student Social Workers. In a time of rapid social change, the School responded Charles Brink by offering a program in community organization, developing a teaching center in Seattle’s historically African American Central District, and hiring faculty of color, including Jim Leigh, Jim Anderson, and Lee Allen. In 1966, the School relocated to Eagleson Hall.

Social unrest leads to new directions A three-year evening master’s degree program was added, and the School moved into a new building.

In 1971, J. Scott Briar was named dean. He moved the School in a new academic direction, recruiting new faculty to strengthen research and bringing the School into national prominence for research, writing, and teaching. In 1974, the bachelor’s program in social welfare was fully accredited.

The doctoral program was added in 1975, and the School’s research capacity continued to grow. Federal training grants supported curriculum innovations in social work administration, women’s mental health, ethnic minority mental health, child welfare, and aging. By the late 1970s, the School had 50 faculty members, some 300 master’s degree students, more than 175 undergraduates, and 24 doctoral students. By the early 1980s, the School’s national standing was firmly established. In the ensuing period of expansion, pioneering programs such as the Northwest Regional Child Welfare Training Center, which works with state social agencies to improve child welfare services, were established.

By 1984, the School had trained more than 3,000 social work students. Nancy Hooyman became dean in 1987—the first woman to hold that post at the School.

Between 1987 and 1992, the School’s grant funding increased by 250 percent. The School’s commitment to diversifying the faculty, student body, and curriculum—including hiring LGBT faculty—also grew. Groundbreaking work included HIV/AIDS-related research, and the School added a new computer lab to support research and teaching. In 1996, the School established the Intergroup Dialogue, Education and Action (IDEA) Center to engage students on issues of race and justice. A one-year master’s program was added in 1997, and in 1998 distance learning opportunities were expanded to the Olympic Peninsula and Tacoma, where a master’s program directed by Marcie Lazzari opened. School of Social Work building (1980) Black Student Union sit-in (1968)

A focus on innovation for impact Dorothy Van Soest was named dean in 2002. The School launched the Institutes of Excellence and supported innovative connections among teaching, research, and practice. In 2005, the West Coast Poverty Center was established at the Dorothy Van Soest School, becoming a hub for research, education, and policy analysis focusing on the causes and consequences of poverty. The Indigenous Wellness Research Institute was founded in 2006 to improve the health of indigenous people. In 2012, it was named a Center of Excellence by the National Institutes of Health, the first school of social work program to receive this designation. In 2006, Edwina Uehara became dean—the first person of color to hold that position at the School. In 2011, she became the inaugural holder of the Ballmer Endowed Deanship in Social Work, the nation’s first such endowment in social work at a public university. Uehara has focused on building collaborative relationships within the University and with public agencies, the private sector, and

nonprofit organizations while simultaneously strengthening the School’s commitment to social innovation, impact, and equity. Among the innovative public-private partnerships launched during Uehara’s tenure is Partners for Our Children, which was founded in 2007 to enhance child welfare policy and practices through research and collaboration. In 2012, the School spearheaded the Alliance for Child Welfare Excellence, a unique partnership uniting the resources of the state’s child welfare agency and the state’s social work schools to provide comprehensive child welfare training and education. The School has taken a leadership role in the Grand Challenges for Social Work, launched in 2014 by the American Academy of Social Work and Social Welfare to galvanize social Edwina S. Uehara work expertise, education, research, and practice. This groundbreaking initiative uses science to strengthen the social fabric, ensure individual and family well-being, and achieve a more just society. The School continues its upward trajectory in regional, national, and international prominence. In 2017, U.S. News &amp; World Report ranked the School #3 among the nation’s more than 200 advanced social work degree programs. The same year, the Center for World University Rankings named it the top social work school in the world for its influential research, academic excellence, and broad impact.

BE PART OF OUR HISTORY socialwork.uw.edu

The School of Social Work's history is shaped by public service, academic innovation and a rigorous scientific approach to deciphering demanding social problems for successive generations.