Socialist Party leaflet- All OUT ON NOV 30 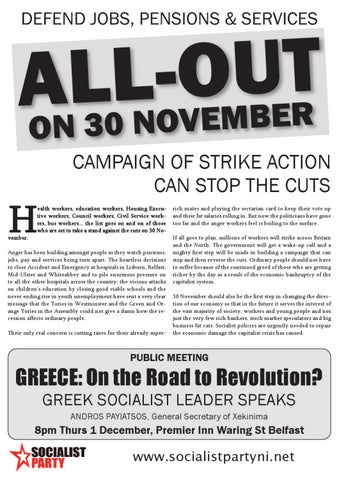 CAMPAIGN OF STRIKE ACTION CAN STOP THE CUTS

ealth workers, education workers, Housing Executive workers, Council workers, Civil Service workers, bus workers... the list goes on and on of those who are set to take a stand against the cuts on 30 No-

Anger has been building amongst people as they watch pensions, jobs, pay and services being torn apart. The heartless decisions to close Accident and Emergency at hospitals in Lisburn, Belfast, Mid-Ulster and Whiteabbey and to pile enormous pressure on to all the other hospitals across the country; the vicious attacks on children’s education by closing good viable schools and the never ending rise in youth unemployment have sent a very clear message that the Tories in Westminster and the Green and Orange Tories in the Assembly could not give a damn how the recession affects ordinary people. Their only real concern is cutting taxes for their already super-

rich mates and playing the sectarian card to keep their vote up and their fat salaries rolling in. But now the politicians have gone too far and the anger workers feel is boiling to the surface. If all goes to plan, millions of workers will strike across Britain and the North. The government will get a wake-up call and a mighty ﬁrst step will be made in building a campaign that can stop and then reverse the cuts. Ordinary people should not have to suffer because of the continued greed of those who are getting richer by the day as a result of the economic bankruptcy of the capitalist system. 30 November should also be the ﬁrst step in changing the direction of our economy so that in the future it serves the interest of the vast majority of society, workers and young people and not just the very few rich bankers, stock market speculators and big business fat cats. Socialist policies are urgently needed to repair the economic damage the capitalist crisis has caused.

Assembly politicians must be challenged Over the last few years a debate has been ongoing about the relationship between the Northern Ireland Assembly and the trade unions. On one side of the debate are those who argue that the Assembly politicians are our friends and that we should have a ‘partnership’ approach. But how can there be a partnership with the Assembly parties when ALL the parties have implemented cuts, when ALL the parties have got rid of jobs and when ALL the parties have overseen cuts in the real pay of public sector workers? The argument made by the pro-‘partnership’ crowd really fell apart in October when it was revealed that the NI Assembly Executive secretly followed orders from Tory leader David Cameron and voted to implement a pensions levy on every civil and public servant in the pension scheme. What ‘partnership’ really means is living in a dream world where the very politicians who are carrying out attacks on ordinary workers today will be our saviours tomor-

row! The trade union leadership must wake up, smell the coffee and start to take the Assembly politicians on. This means taking them on through strike action and protests but it also means taking them on at the ballot box. After all, why should workers leave them in power to keep attacking us?

Socialist Party says: n Stop all cuts to jobs, pensions, pay and services n Make the billionaires pay - collect the £123 billion in unpaid taxes by the rich n Launch an emergency public works programme to create tens of thousands of jobs n End the financial crisis - nationalise the banks under democratic control to provide cheap credit and invest resources to create jobs n For international solidarity against the dictatorship of the markets - joint struggle of workers across Europe - for a socialist Europe!

The trade unions, along with communities, anti-cuts activists and socialists, should support the formation of a new democratic mass working class party to unite thousands of workers against the cuts, offer a real alternative to the dead end of sectarianism and put forward a socialist alternative to the failed right-wing policies of all the main parties.

Union members: Get Organised To make sure that strike action has the greatest possible effect union members must get organised. Union members need to get active in their unions linking with other workers in their area so that there is maximum impact on the day of the strike. Joint strike committees should be formed - linking members of different unions across different workplaces. The movement must be democratic. Those who are affected by the cuts must have real control over how the action progresses, how the struggle moves forward and what is agreed at the negotiations. There must be no secret deals. The 30 November strike on its own will not be enough. To succeed the strike must be part of a much wider campaign of industrial action, protests and publicity that should involve young people, private sector workers and the unemployed so that the vast majority of society is united in the ﬁght against cuts and for the preservation of our health service, our education service and the welfare state.

Socialist Party leaflet- All OUT ON NOV 30

leaflet in led up to November 30th