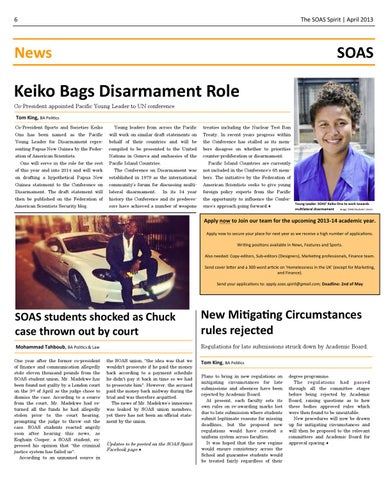 Young leaders from across the Pacific

treaties including the Nuclear Test Ban

Ono has been named as the Pacific

will work on similar draft statements on

Treaty. In recent years progress within

behalf of their countries and will be

the Conference has stalled as its mem-

compiled to be presented to the United

bers disagree on whether to prioritise

Nations in Geneva and embassies of the

Ono will serve in the role for the rest

of this year and into 2014 and will work

The Conference on Disarmament was

not included in the Conference’s 65 mem-

on drafting a hypothetical Papua New

established in 1979 as the international

bers. The initiative by the Federation of

Guinea statement to the Conference on

American Scientists seeks to give young

Disarmament. The draft statement will

then be published on the Federation of

history the Conference and its predeces-

the opportunity to influence the Confer-

sors have achieved a number of weapons

Apply now to Join our team for the upcoming 2013-14 academic year. Apply now to secure your place for next year as we receive a high number of applications. Writing positions available in News, Features and Sports. Also needed: Copy-editors, Sub-editors (Designers), Marketing professionals, Finance team. Send cover letter and a 300 word article on 'Homelessness in the UK' (except for Marketing, and Finance). Send your applications to: apply.soas.spirit@gmail.com; Deadline: 2nd of May

SOAS students shocked as Chuck case thrown out by court

Regulations for late submissions struck down by Academic Board.

One year after the former co-president of finance and communication allegedly stole eleven thousand pounds from the SOAS student union, Mr. Madekwe has been found not guilty by a London court on the 3rd of April as the judge chose to dismiss the case. According to a source from the court, Mr. Madekwe had returned all the funds he had allegedly stolen prior to the court hearing, prompting the judge to throw out the case. SOAS students reacted angrily soon after hearing this news, as Eoghain Cooper, a SOAS student, expressed his opinion that "the criminal justice system has failed us". According to an unnamed source in

the SOAS union, "the idea was that we wouldn't prosecute if he paid the money back according to a payment schedule he didn't pay it back in time so we had to prosecute him". However, the accused paid the money back midway during the trial and was therefore acquitted. The news of Mr. Madekwe’s innocence was leaked by SOAS union members, yet there has not been an official statement by the union.

Updates to be posted on the SOAS Spirit Facebook page.♦

Tom King, BA Politics Plans to bring in new regulations on mitigating circumstances for late submissions and absences have been rejected by Academic Board. At present, each faculty sets its own rules on re-awarding marks lost due to late submission where students submit legitimate reasons for missing deadlines, but the proposed new regulations would have created a uniform system across faculties. It was hoped that the new regime would ensure consistency across the School and guarantee students would be treated fairly regardless of their

degree programme. The regulations had passed through all the committee stages before being rejected by Academic Board, raising questions as to how these bodies approved rules which were then found to be unsuitable. New procedures will now be drawn up for mitigating circumstances and will then be proposed to the relevant committees and Academic Board for approval spacing.♦ 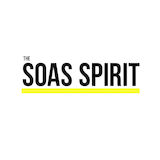