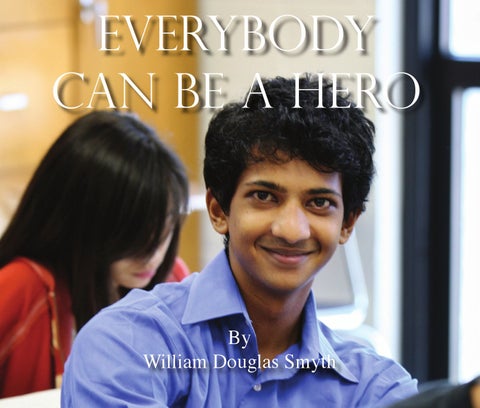 Everybody Can Be a Hero By William Douglas Smyth

To all of the students at the Panchayat Union Elementary School and Government Higher Secondary School at Maganurpatti, Tamil Nadu, India

The sun hung low over the lush green mountains that

surrounded the village of Maganurpatti in southern India. Already the temperature had climbed to 90 degrees. It would get hotter as the day wore on, but that didnâ&#x20AC;&#x2122;t matter to Vasanth Kuppuswamy, a young boy of twelve. He had a mission to accomplish this morning, and he had to succeed.

Vasanth lay awake all night, thinking about what he was going to tell the elementary school principal. How could he have said such a thing! Just yesterday he had told this young boy from America that no one in this village ever amounted to anything. Every child was going to grow up and be a servant, shepherd, or farmhand.

Vasanth just couldnâ&#x20AC;&#x2122;t accept that. Most of his relatives had grown up in this village and had attended this very school. His father was now a medical researcher at a fine institution in the United States. His uncle had become a college physics professor while his aunt had taught school for many years and was considered one of the finest teachers in the community. How could a principal have so little hope for his own students?

Vasanth resolved there and then that he had to stand up to this man and tell him that he was wrong. These students could amount to something. They had to be given a chance. He would be their oxygen that would ignite their flames.

He would be their hope.

Vasanth spoke clearly and calmly. He knew he had to get his words right the first time.

hear a lot of nonsense. The principal had a school to run, and the school day was about to begin.

With a strong, determined voice, Vasanth looked the principal squarely in the eyes and said, “These students can amount to something, but they must be given a chance. Someone must believe in them. Someone must convince them that they can be anything they want to be.” Vasanth paused and then continued, “I want to be that person. I will believe in them and be their inspiration.”

The principal couldn’t believe what he was hearing. Surely, this wouldn’t work. These students were lazy. They had no goals. They wouldn’t try very hard or attempt anything new.

But Vasanth stood his ground and replied, “There’s no other way. We must start today. It is the beginning of another school year. give me a chance.”

Things will be different.

So that day Vasanth Kuppuswamy stepped into a fifth grade classroom and began teaching English to students who were only one year younger than he was. Word soon spread throughout the village that this boy from America would teach all summer long, and all of the children wanted him to be their teacher.

The summer flew by.

Vasanth taught English in the

morning, ate lunch with the students at noon, and taught English again in the afternoon. During recess, they taught him how to play their favorite game, kabadi, and he taught the students how to play American football. He also introduced them to one of his favorite sports, Ultimate Frisbee. But progress was slow. The students lacked so many things including basic school supplies and even desks. How could he solve this problem?

Back in America, an idea crossed his mind. What if he spoke to school groups and asked them to join him in helping the students in India? What if he also spoke to adults and asked for their support? He could create a PowerPoint presentation of the village needs - the schools with no desks, no ceiling fans, few books, and no science labs.

Vasanth could also show pictures of things like the hand pump in the schoolyard, the only source of water for the students. At the same time, Vasanth could challenge the students to look around their own communities and figure out how they could volunteer there. They couldnâ&#x20AC;&#x2122;t come to India very easily, but they could be helpful right where they lived.

Another idea popped into Vasanthâ&#x20AC;&#x2122;s mind too. This project of helping students in India and assisting people in America could be guided by the words of two great individuals whom he admired very much - the Indian freedom fighter Mahatma Gandhi and the American anthropologist Margaret Mead.

Gandhi once said, “Be the change you want to see in the world.” Mead had added, “Never doubt that a small group of thoughtful, committed citizens can change the world. Indeed, it’s the only thing that ever has.”

Many school groups heard this message, and students responded enthusiastically. Where no service clubs existed before, students started some.

Where no efforts had ever been

made to reach out to their community and extend a helping hand, students began getting involved.

Lawns were mowed. Litter was picked up. Students collected canned goods and medical supplies to help disaster victims. They went into nursing homes and retirement centers with their musical instruments and voices. Students helped out at animal shelters and repaired houses. There was no end to what they could do.

And Vasanth returned to India with $8,000 several years in a row. He had local carpenters build desks and benches and install ceiling fans. He purchased school supplies and science lab equipment for the students.

Vasanth spruced up the front of the school, built a beautiful wall around the school, constructed a basketball court, and bought a generator so the school would always have electricity. The World Bank gratefully added an exquisite two-story building to the campus for additional classrooms, science labs, and a computer lab.

Because so many students continued to come to this school from other neighboring schools, Vasanth also purchased four additional acres of land next to the high school for future school expansion. This would give even more students the opportunity to receive an excellent education.

He wanted to bring a

water purification system to the village.

to start a school library, provide calculators for math and science classes, establish after-school and summer programs so students could receive additional academic training, institute an elementary school art program, improve the running track, put shoes on the feet of the Scout troop, and help send seniors to college.

As additional funds became available, Vasanth also wanted to help other schools become model schools just like the schools in Maganurpatti. He even dreamed of adding health clinics in all of the 149 district schools so children would receive the medical attention they needed as well as immunizations and yearly check-ups.

All of this was really a tall order, but Vasanth dreamed big dreams and never used the word “if ” but “when.” He believed that people would step up to the challenge and help other people in a part of the world where they would probably never visit.

And he was right.

People gave very generously, and every need was met.

rippling effect that Vasanth hoped to see actually happened, and many childrenâ&#x20AC;&#x2122;s lives were dramatically changed.

And then a miracle began to happen.

The students in the Maganurpatti high school began to reach out and assist the younger schoolchildren in the village schools around them. They tutored the children, held Saturday science classes for them in their new science labs, taught them computer skills in their new computer lab, and organized sports programs for them on their new athletic fields.

Many of the high school students decided to go to college and become teachers and principals, returning to Maganurpatti and neighboring villages to work in the many rural schools.

Other students became architects and engineers and helped villages build modern school facilities that were equipped with everything a school should have including a library, science labs, computer labs, sports facilities, and even a health clinic.

Did all of this really happen, you might ask? Yes, it did, and it was because one small twelve-year-old boy had the vision, the courage, and the determination to do what was right, to give of his time unselfishly, to help where he could, and to ask others to do the same.

Here is the poem Vasanth carried in his pocket every day:

Just remember the words of this poem and live them out to the fullest every day.

You, too, can be a hero wherever you live!

you want to see