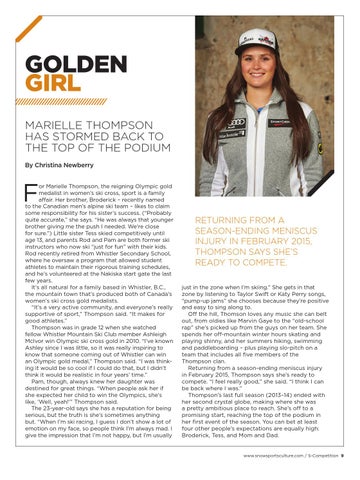 or Marielle Thompson, the reigning Olympic gold medalist in women’s ski cross, sport is a family affair. Her brother, Broderick – recently named to the Canadian men’s alpine ski team – likes to claim some responsibility for his sister’s success. (“Probably quite accurate,” she says. “He was always that younger brother giving me the push I needed. We’re close for sure.”) Little sister Tess skied competitively until age 13, and parents Rod and Pam are both former ski instructors who now ski “just for fun” with their kids. Rod recently retired from Whistler Secondary School, where he oversaw a program that allowed student athletes to maintain their rigorous training schedules, and he’s volunteered at the Nakiska start gate the last few years. It’s all natural for a family based in Whistler, B.C., the mountain town that’s produced both of Canada’s women’s ski cross gold medalists. “It’s a very active community, and everyone’s really supportive of sport,” Thompson said. “It makes for good athletes.” Thompson was in grade 12 when she watched fellow Whistler Mountain Ski Club member Ashleigh McIvor win Olympic ski cross gold in 2010. “I’ve known Ashley since I was little, so it was really inspiring to know that someone coming out of Whistler can win an Olympic gold medal,” Thompson said. “I was thinking it would be so cool if I could do that, but I didn’t think it would be realistic in four years’ time.” Pam, though, always knew her daughter was destined for great things. “When people ask her if she expected her child to win the Olympics, she’s like, ‘Well, yeah!’” Thompson said. The 23-year-old says she has a reputation for being serious, but the truth is she’s sometimes anything but. “When I’m ski racing, I guess I don’t show a lot of emotion on my face, so people think I’m always mad. I give the impression that I’m not happy, but I’m usually 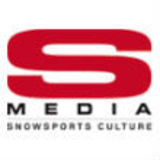 Individual, schmindividual. Those in the snowsports trenches know that an athlete trying to reach the top of any podium based solely on indi...

Individual, schmindividual. Those in the snowsports trenches know that an athlete trying to reach the top of any podium based solely on indi...