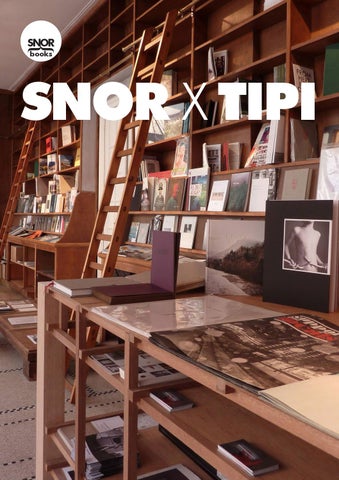 THIS WAS COLL WITH ANDR TIPI B

If you are producing

Special thanks to Peter Wa

ISSUE OF SNOR MADE IN LABORATION H REA COPETTI OF BOOKSHOP.

lf-published photo books, or books done by smaller, independent publishhe place to be for lovers of photography and books.

aterschoot, the brain behind the ArtWall exhibitions, for putting Tipi and SNOR together.

Photographers Ruben Accou and Thomas Vandenberghe teamed up for their first joint-publication. They’re constantly using each other’s photos to set up a conversation and they decided to turn that practice into a self-publishing adventure. www.raccou.com www.thomasvandenberghe.be 2013, self-published, edition of 20 www.facebook.com/amazingflashcamera

Valentino Barachini is a master photobook maker, his publications are gems that combine bookmaking craft and photography.

KZ Gli Ultimi Testimoni (The last witnesses) looks into the nazi death camps in Germany, Austria and Poland. Barachini visited them between 2008 and 2011. www.barachini.com Self-published, edition of 10

Martijn Berk writes on his website: â&amp;#x20AC;&amp;#x153;Falling from a height tells the story of my obsession for a 20-year-old boy. At first sight, the project might seem to be just a personal document, but at a second glance the project also raises questions that could be applicable to everyone: How far do you go in the quest for intimacy, how do you deal with the primal forces that are awakened? And just how does the power play work between two people?â&amp;#x20AC;?

FALLING FROM A HEIGHT.

French photographer of Asian descent, Tiane Doan na Champassak (1973), based in Provence, was first recognized for his documentary work (Agence Vu) before exploring a more artistic approach. His photography is driven by a fascination for gender identity issues, revealing a decidedly aesthetic sensibility. For each body of work, print or publication, he seeks out the most appropriate techniques, materials and formats. www.champassak.com 2013, self-published

Olivier Cornil about this book: “I’m attracted by the overseas. I’m not a globetrotter, solitude is important to me in my daily life but it hate it when I’m travelling. Yet, whenever I have the chance of leaving, I do.” Olivier Cornil is the winner of the “Propositions d’artistes” van het l’Espace Photographique Contretype, a competition aimed to encourage creativity in Wallonia-Brussels. www.oliviercornil.be 2012, published by Editions Yellow Now

Here’s Johnny is a visual impression of Marlies’ life, seen through the lenses of many many disposable cameras. She always carries one with her and shoots whatever catches her eye. Sometimes it feels more like drawing than photographing, she says. www.marliesdeclerck.be 2013, self-published

Peter Dekens about Touch: “Stijn is a young man (23). He was born blind and lives in a modest apartment somewhere in the city. This is the only place in the world where he can move so freely. The table, the chairs, the kitchen and the bed aren’t obstacles for him.“

Touch has been nominated at Fotobookfestival Kassel 2013. www.peterdekens.com 2012, self-published, edition of 500

Vincent Delbrouck published Beyond History (Havana 1998-2006) and started making a name for himself as a photographer to watch. His latest publication As dust alights, is the first part of a trilogy he calls The Himalayan Project. He lived with his family in Katmandu, and As Dust Alights reflects his experiences as a stranger in a -for him- unknown country. www.vincentdelbrouck.be 2013, self-published, edition of 200

Alle Von Denen or ( â&amp;#x20AC;&amp;#x2DC;All of Thoseâ&amp;#x20AC;&amp;#x2122;) comes with actual c-prints, attached to the pages. The models are covering their faces with elaborate bouquets; the photos are like a sweet memory of a dream from which it was hard waking up. www.amirafritz.com 2012, edition of 120, published by b.frank books www.bfrankbooks.org

Marina Gadonneixâ&amp;#x20AC;&amp;#x2122;s work weaves a complex link between documentary and fiction through photographs of places given over to temporary neglect. www.marinagadonneix.com 2012, published by RVB Books www.rvb-books.com

THE HOUSE THAT BURNS EVERY DAY. MARINA GADONNEIX

In Coming home, any day now Melissa Mabesoone tries to grasp an indefinable place, a spot stuck between nostalgia and utopia. She calls the book ‘a tale about the imaginary’. It’s a journey through (re-)constructed, memorized, found places... www.melissamabesoone.blogspot.be 2013, self-published

Sébastien Marcq’s work has been published in SNOR before, he was featured in SNOR 8. Back to Nola is a photographic essay of a homecoming to New Orleans. www.photography-marcq.com 2013, published by Wabi Sabi éditions www.wabisabi-editions.com

BACK TO NOLA. SÉBASTIEN MARCQ

Nemanja Pančić, winner of World Press Photo contest 2013 for the category “Observed Portrait”, chose to leave his representation of Serbia to the “Najdan Circles“, named after their alleged discoverer, Najdan Rakic, who claimed to have found an energy field with healing power in the small Serbian village of Mala Krsna. www.nemanjapancic.blogspot.com 2013, 100 copies, published by Akina www.akinabooks.com

IF I EXORCISE MY DEVILS MY ANGELS MAY LEAVE TOO. NEMANJA PANCIC

Martin Parr said it best: “The sleeper book of the year is Max Pinckers’ The Fourth Wall by this emerging young Belgian photographer. It is a very nice production, and this self-published book, on a charmingly cheap newsprint examines the idea of the Indian film world and the escapism of this, alongside a very good set of contemporary images. These two ideas are woven together with great skill and the book just seems to work very well.” www.maxpinckers.be 2012, 1000 copies, self-published

Jörg Colberg -a pillar in the online photography community- reviewed One and a half meter: “The fact that the book is a relatively small production only enhances the effect of the work. The book trusts its viewers to understand the preciousness as coming from the photographs, not from a lavish production. If there is a good example for how a smaller book can be preferable, here is one.” www.peterpuklus.com 2012, published by Kehrer Verlag

foundfootage.be is an online platform, on which different types of ‘found’ material are brought together. This material can be provided by artists but also comes from everyday sources. ‘Rheum’ is an experimental vision on this practice. With content by Taco Hidde Bakker, Brad Feuerhelm, Lucas Soi, Brad Tinmouth, Robert Urquhart, Kevin Kelly, Daniel Barroca, Philippe Wolthuis... www.foundfootage.be 2013, self-published by De Bedoeling &amp; foundfootage.be, edition of 250

Stefan Vanthuyne writes about his book: “In more ways than I could have imagined, becoming a father has been an overwhelming experience. With the beauty of parenthood came a vulnerability that I had never felt before. It left me with a heart full of doubts and a head full of questions.

Our first child was born in July 2007. In June 2009, his second birthday just around the corner, we travelled to the Ardèche region in France. The photographs in this book were made as a record of our days spent there. Away from an everyday context, far from our daily routines and patterns, things rise to the surface. Relationships become visible. The incredible bond between a mother and her son. (What is my part?) Almost tangible. Having returned to these photographs many times since then, it took me until now to realize this. To see and to recognize.” www.stefanvanthuyne.be 2013, published by Le Caillou Bleu http://collection.cailloubleu.com

The Seventh Row of Seats [Preparing The Scene] is a collection of Waterschootâ&amp;#x20AC;&amp;#x2122;s dystopian photographs. Dark, brooding, timeless, the images seduce slowly and offer no remorse. All exits are blocked, the viewer is trapped. www.peterwaterschoot.com 2012, self-published, edition of 100

THE SEVENTH ROW OF SEATS.

Suzanna about Place And: “Long story short is that I ended up in the Yukon because of the small batch of boreal forest up in Dolly Sods; the highest plateau east of the Mississippi River. I’m sitting in the Midnight Sun a whole 3,792 miles away from Davis, West Virginia. It’s the last song of karaoke that night. Everyone in the bar knows the words. I’m the only person there who’s ever been to West Virginia, but that doesn’t stop everyone from singing, “country roads, take me home, to the place I belong, West Virginia, mountain momma, take me home, country roads...” www.suzannazak.com Edition of 300 copies