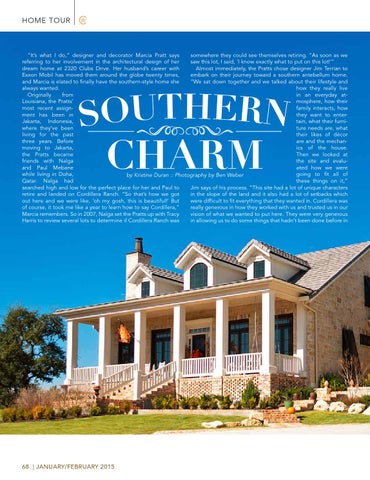 somewhere they could see themselves retiring. “As soon as we “It’s what I do,” designer and decorator Marcia Pratt says referring to her involvement in the architectural design of her saw this lot, I said, ‘I know exactly what to put on this lot!’” Almost immediately, the Pratts chose designer Jim Terrian to dream home at 2320 Clubs Drive. Her husband’s career with embark on their journey toward a southern antebellum home. Exxon Mobil has moved them around the globe twenty times, “We sat down together and we talked about their lifestyle and and Marcia is elated to finally have the southern-style home she how they really live always wanted. Originally from in an everyday atmosphere, how their Louisiana, the Pratts’ family interacts, how most recent assignment has been in they want to entertain, what their furniJakarta, Indonesia, ture needs are, what where they’ve been their likes of décor living for the past are and the mechanthree years. Before moving to Jakarta, ics of the house. Then we looked at the Pratts became the site and evalufriends with Nalga ated how we were and Paul Mebane going to fit all of while living in Doha, by Kristine Duran :: Photography by Ben Weber these things on it,” Qatar. Nalga had Jim says of his process. “This site had a lot of unique characters searched high and low for the perfect place for her and Paul to in the slope of the land and it also had a lot of setbacks which retire and landed on Cordillera Ranch. “So that’s how we got were difficult to fit everything that they wanted in. Cordillera was out here and we were like, ‘oh my gosh, this is beautiful!’ But really generous in how they worked with us and trusted us in our of course, it took me like a year to learn how to say Cordillera,” vision of what we wanted to put here. They were very generous Marcia remembers. So in 2007, Nalga set the Pratts up with Tracy in allowing us to do some things that hadn’t been done before in Harris to review several lots to determine if Cordillera Ranch was 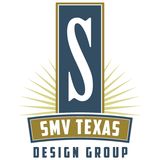