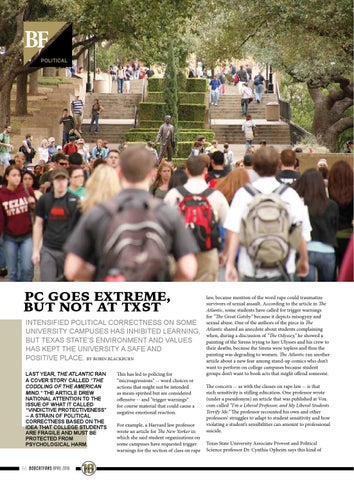 PC GOES EXTREME, BUT NOT AT TXST INTENSIFIED POLITICAL CORRECTNESS ON SOME UNIVERSITY CAMPUSES HAS INHIBITED LEARNING, BUT TEXAS STATE’S ENVIRONMENT AND VALUES HAS KEPT THE UNIVERSITY A SAFE AND POSITIVE PLACE. BY ROBIN BLACKBURN LAST YEAR, THE ATLANTIC RAN A COVER STORY CALLED “THE CODDLING OF THE AMERICAN MIND.” THE ARTICLE DREW NATIONAL ATTENTION TO THE ISSUE OF WHAT IT CALLED “VINDICTIVE PROTECTIVENESS” -- A STRAIN OF POLITICAL CORRECTNESS BASED ON THE IDEA THAT COLLEGE STUDENTS ARE FRAGILE AND MUST BE PROTECTED FROM PSYCHOLOGICAL HARM.

This has led to policing for “microagressions” -- word choices or actions that might not be intended as mean-spirited but are considered offensive -- and “trigger warnings” for course material that could cause a negative emotional reaction. For example, a Harvard law professor wrote an article for The New Yorker in which she said student organizations on some campuses have requested trigger warnings for the section of class on rape

law, because mention of the word rape could traumatize survivors of sexual assault. According to the article in The Atlantic, some students have called for trigger warnings for “The Great Gatsby” because it depicts misogyny and sexual abuse. One of the authors of the piece in The Atlantic shared an anecdote about students complaining when, during a discussion of “The Odyssey,” he showed a painting of the Sirens trying to lure Ulysses and his crew to their deaths, because the Sirens were topless and thus the painting was degrading to women. The Atlantic ran another article about a new fear among stand-up comics who don’t want to perform on college campuses because student groups don’t want to book acts that might offend someone. The concern -- as with the classes on rape law -- is that such sensitivity is stifling education. One professor wrote (under a pseudonym) an article that was published at Vox. com called “I’m a Liberal Professor, and My Liberal Students Terrify Me.” The professor recounted his own and other professors’ struggles to adapt to student sensitivity and how violating a student’s sensibilities can amount to professional suicide. Texas State University Associate Provost and Political Science professor Dr. Cynthia Opheim says this kind of 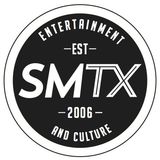