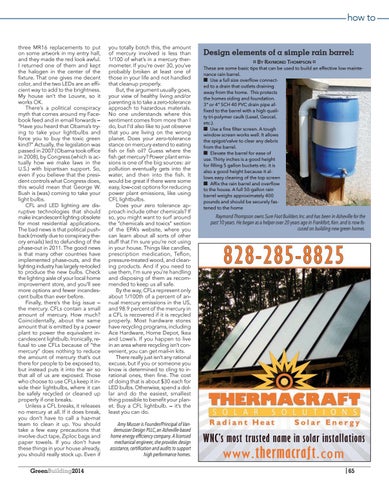 how to three MR16 replacements to put on some artwork in my entry hall, and they made the red look awful. I returned one of them and kept the halogen in the center of the fixture. That one gives me decent color, and the two LEDs are an efficient way to add to the brightness. My house isn’t the Louvre, so it works OK. There’s a political conspiracy myth that comes around my Facebook feed and in email forwards — “Have you heard that Obama’s trying to take your lightbulbs and force you to buy the toxic green kind?” Actually, the legislation was passed in 2007 (Obama took office in 2008), by Congress (which is actually how we make laws in the U.S.) with bipartisan support. So, even if you believe that the president controls what Congress does, this would mean that George W. Bush is (was) coming to take your light bulbs. CFL and LED lighting are disruptive technologies that should make incandescent lighting obsolete for most residential applications. The bad news is that political pushback (mostly due to conspiracy theory emails) led to defunding of the phase-out in 2011. The good news is that many other countries have implemented phase-outs, and the lighting industry has largely re-tooled to produce the new bulbs. Check the lighting aisle of your local home improvement store, and you’ll see more options and fewer incandescent bulbs than ever before. Finally, there’s the big issue — the mercury. CFLs contain a small amount of mercury. How much? Coincidentally, about the same amount that is emitted by a power plant to power the equivalent incandescent lightbulb. Ironically, refusal to use CFLs because of “the mercury” does nothing to reduce the amount of mercury that’s out there for people to be exposed to, but instead puts it into the air so that all of us are exposed. Those who choose to use CFLs keep it inside their lightbulbs, where it can be safely recycled or cleaned up properly if one breaks. Unless a CFL breaks, it releases no mercury at all. If it does break, you don’t have to call a haz-mat team to clean it up. You should take a few easy precautions that involve duct tape, Ziploc bags and paper towels. If you don’t have these things in your house already, you should really stock up. Even if

you totally botch this, the amount of mercury involved is less than 1/100 of what’s in a mercury thermometer. If you’re over 30, you’ve probably broken at least one of those in your life and not handled that cleanup properly. But, the argument usually goes, your view of healthy living and/or parenting is to take a zero-tolerance approach to hazardous materials. No one understands where this sentiment comes from more than I do, but I’d also like to just observe that you are living on the wrong planet. Does your zero-tolerance stance on mercury extend to eating fish or fish oil? Guess where the fish get mercury? Power plant emissions is one of the big sources: air pollution eventually gets into the water, and then into the fish. It would be great if there were some easy, low-cost options for reducing power plant emissions, like using CFL lightbulbs. Does your zero tolerance approach include other chemicals? If so, you might want to surf around the “chemicals and toxics” section of the EPA’s website, where you can learn about all sorts of other stuff that I’m sure you’re not using in your house. Things like candles, prescription medication, Teflon, pressure-treated wood, and cleaning products. And if you need to use them, I’m sure you’re handling and disposing of them as recommended to keep us all safe. By the way, CFLs represent only about 1/100th of a percent of annual mercury emissions in the US, and 98.9 percent of the mercury in a CFL is recovered if it is recycled properly. Most hardware stores have recycling programs, including Ace Hardware, Home Depot, Ikea and Lowe’s. If you happen to live in an area where recycling isn’t convenient, you can get mail-in kits. There really just isn’t any rational excuse, but if you or someone you know is determined to cling to irrational ones, then fine. The cost of doing that is about $30 each for LED bulbs. Otherwise, spend a dollar and do the easiest, smallest thing possible to benefit your planet. Buy a CFL lightbulb. — it’s the least you can do.

These are some basic tips that can be used to build an effective low maintenance rain barrel. ■ Use a full size overflow connected to a drain that outlets draining away from the home. This protects the homes siding and foundation. 3" or 4" SCH 40 PVC drain pipe affixed to the barrel with a high quality tri-polymer caulk (Lexel, Geocel, etc.). ■ Use a fine filter screen. A tough window screen works well. It allows the spigot/valve to clear any debris from the barrel. ■ Elevate the barrel for ease of use. Thirty inches is a good height for filling 5 gallon buckets etc. it is also a good height because it allows easy cleaning of the top screen ■ Affix the rain barrel and overflow to the house. A full 50-gallon rain barrel weighs approximately 400 pounds and should be securely fastened to the home

Raymond Thompson owns Sure Foot Builders Inc. and has been in Asheville for the past 10 years. He began as a helper over 20 years ago in Frankfort, Ken. and is now focused on building new green homes.