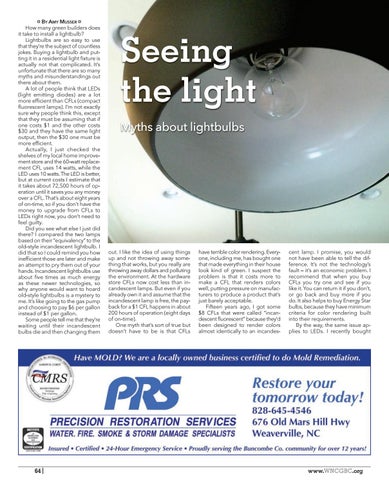 p BY AMY MUSSER p How many green builders does it take to install a lightbulb? Lightbulbs are so easy to use that they’re the subject of countless jokes. Buying a lightbulb and putting it in a residential light fixture is actually not that complicated. It’s unfortunate that there are so many myths and misunderstandings out there about them. A lot of people think that LEDs (light emitting diodes) are a lot more efficient than CFLs (compact fluorescent lamps). I’m not exactly sure why people think this, except that they must be assuming that if one costs $1 and the other costs $30 and they have the same light output, then the $30 one must be more efficient. Actually, I just checked the shelves of my local home improvement store and the 60-watt replacement CFL uses 14 watts, while the LED uses 10 watts. The LED is better, but at current costs I estimate that it takes about 72,500 hours of operation until it saves you any money over a CFL. That’s about eight years of on-time, so if you don’t have the money to upgrade from CFLs to LEDs right now, you don’t need to feel guilty. Did you see what else I just did there? I compared the two lamps based on their “equivalency” to the old-style incandescent lightbulb. I did that so I could remind you how inefficient those are later and make an attempt to pry them out of your hands. Incandescent lightbulbs use about five times as much energy as these newer technologies, so why anyone would want to hoard old-style lightbulbs is a mystery to me. It’s like going to the gas pump and choosing to pay $6 per gallon instead of $1 per gallon. Some people tell me that they’re waiting until their incandescent bulbs die and then changing them

Seeing the light Myths about lightbulbs

out. I like the idea of using things up and not throwing away something that works, but you really are throwing away dollars and polluting the environment. At the hardware store CFLs now cost less than incandescent lamps. But even if you already own it and assume that the incandescent lamp is free, the payback for a $1 CFL happens in about 200 hours of operation (eight days of on-time). One myth that’s sort of true but doesn’t have to be is that CFLs

have terrible color rendering. Everyone, including me, has bought one that made everything in their house look kind of green. I suspect the problem is that it costs more to make a CFL that renders colors well, putting pressure on manufacturers to produce a product that’s just barely acceptable. Fifteen years ago, I got some $8 CFLs that were called “incandescent fluorescent” because they’d been designed to render colors almost identically to an incandes-

cent lamp. I promise, you would not have been able to tell the difference. It’s not the technology’s fault — it’s an economic problem. I recommend that when you buy CFLs you try one and see if you like it. You can return it if you don’t, or go back and buy more if you do. It also helps to buy Energy Star bulbs, because they have minimum criteria for color rendering built into their requirements. By the way, the same issue applies to LEDs. I recently bought