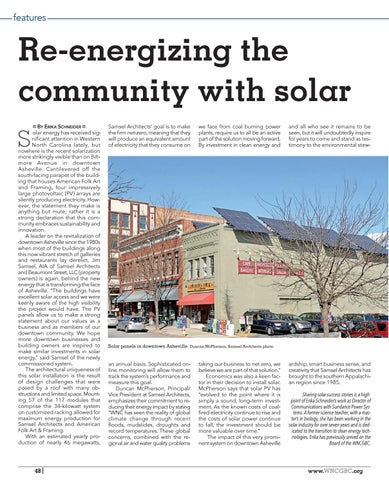 Re-energizing the community with solar p BY ERIKA SCHNEIDER p olar energy has received significant attention in Western North Carolina lately, but nowhere is the recent solarization more strikingly visible than on Biltmore Avenue in downtown Asheville. Cantilevered off the south-facing parapet of the building that houses American Folk Art and Framing, four impressively large photovoltaic (PV) arrays are silently producing electricity. However, the statement they make is anything but mute; rather it is a strong declaration that this community embraces sustainability and innovation. A leader on the revitalization of downtown Asheville since the 1980s when most of the buildings along this now vibrant stretch of galleries and restaurants lay derelict, Jim Samsel, AIA of Samsel Architects and Beaumont Street, LLC (property owners) is again, behind the new energy that is transforming the face of Asheville. “The buildings have excellent solar access and we were keenly aware of the high visibility the project would have. The PV panels allow us to make a strong statement about our values as a business and as members of our downtown community. We hope more downtown businesses and building owners are inspired to make similar investments in solar energy,” said Samsel of the newly commissioned system. The architectural uniqueness of this solar installation is the result of design challenges that were posed by a roof with many obstructions and limited space. Mounting 57 of the 117 modules that comprise the 34-kilowatt system on customized racking allowed for maximum energy production for Samsel Architects and American Folk Art & Framing. With an estimated yearly production of nearly 46 megawatts,

Samsel Architects’ goal is to make the firm net-zero, meaning that they will produce an equivalent amount of electricity that they consume on

we face from coal burning power plants, require us to all be an active part of the solution moving forward. By investment in clean energy and

and all who see it remains to be seen, but it will undoubtedly inspire for years to come and stand as testimony to the environmental stew-

an annual basis. Sophisticated online monitoring will allow them to track the system’s performance and measure this goal. Duncan McPherson, Principal/ Vice President at Samsel Architects, emphasizes their commitment to reducing their energy impact by stating “WNC has seen the reality of global climate change through recent floods, mudslides, droughts and record temperatures. These global concerns, combined with the regional air and water quality problems

taking our business to net zero, we believe we are part of that solution.” Economics was also a keen factor in their decision to install solar. McPherson says that solar PV has “evolved to the point where it is simply a sound, long-term investment. As the known costs of coalfired electricity continue to rise and the costs of solar power continue to fall, the investment should be more valuable over time.” The impact of this very prominent system on downtown Asheville

ardship, smart business sense, and creativity that Samsel Architects has brought to the southern Appalachian region since 1985. Sharing solar success stories is a highpoint of Erika Schneider’s work as Director of Communications with Sundance Power Systems. A former science teacher, with a master’s in biology, she has been working in the solar industry for over seven years and is dedicated to the transition to clean energy technologies. Erika has previously served on the Board of the WNCGBC.